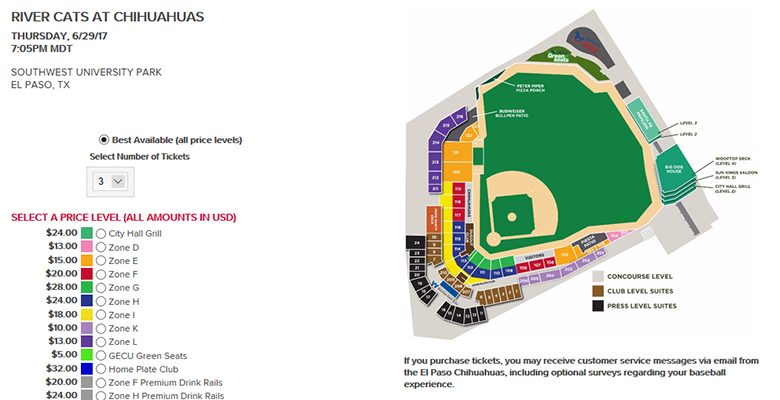 Remember when those nice people were pitching the ballpark as “affordable family entertainment”?

Q: Did you ever imagine you would be in the sports ownership business?

No, we’re a real estate company out making investments every day, seeking much higher returns. Being in the sports ownership business was not something I originally envisioned, but I do think it will be fantastic in April 2014 when 10,000 El Pasoans are enjoying affordable family entertainment in our Downtown.

Sure, you can sit on the berm for $5. Do you want to take you kids to the ballpark and make them sit on the grass where they’re so far away from the action that they might as well have stayed outside and watched through the fence?

Or there’s $9 and $10 seats, with real seats and much the same proximity problem. But even that, and refreshments, are going to set a family of four back $80, at least. Eighty rats goes a long way in El Paso (and forty percent further in Juarez).

And that’s just the start. Good seats can cost more. A lot more.

Of course, affordable is relative. I guess if you have a family of baseball fanatics, $80 might be cheap. It might be worth not getting your youngest eyeglasses, or foregoing a little medication, or putting tap water on your generic-brand Cheerios instead of milk for six months.

How am I supposed to explain to my five-year-old that we’re second-class citizens?

At a taxpayer-funded facility, no less.

Spending is an exercise in the allocation of scarce resources. That’s the basis of capitalism, and I’m okay with that. But that ballpark wasn’t a capitalistic deal. It was pitched as a social good, an option for “affordable family entertainment.” And I’m not seeing that.

Instead, we have a reverse Robin Hood system, where the poor are subsidizing entertainment options for the leisure class. That’s unconscionable.