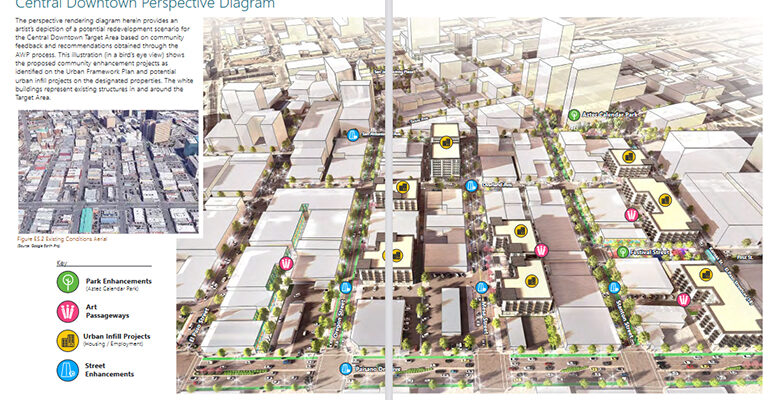 The El Paso Inc. reported this week that there’s a new plan for downtown El Paso.

This month, the DMD, an entity governed by Downtown business and property owners that provides services and promotes economic development in the city’s core, released its “Central Downtown El Paso Area-Wide Planning and Revitalization Strategies” report.

“There are a lot of things we still have to do that are still left over from the 2006 plan and are ripple effects from what we have,” said Joe Gudenrath, executive director of the El Paso Downtown Management District.

“You can talk about renewal and resurgence, emerging urban neighborhoods, without automatically talking about demolitions of buildings,” Gudenrath said. “That area is primed for (renewal), and you don’t have to poison a discussion with things like demolition, displacement, gentrification, things like that.”

You remember the old downtown plan, don’t you? Eminent domain, and a Walmart in Segundo.

Well, let’s not poison a discussion by talking about things like demolition, displacement, gentrification, things like that.

Like what that image at the top of this page represents. That image I lifted from the new Downtown Plan.

Let’s not talk about it. Let’s not poison the discussion by talking about what the plan really means.

This might be a good time to remind you that downtown El Paso is covered by TIRZ 5, so any increase in property tax revenues from downtown actually stays in downtown. If any of this contemplated redevelopment in downtown is financed by the City of El Paso, that’s taking taxpayer money and giving it to downtown developers with no chance of any return on that investment.

But taking money from the taxpayers and giving it to the developers is standard operating procedure for the City. That’s why our taxes are so high, and our streets are crumbling, and El Paso is one of the Least Affordable Cities in the Nation.

This is just one more piece of the class war that the City of El Paso, the Chamber of Commerce, and MountainStar Sports Group are waging against the working class, small businesses, and people who live on fixed incomes.