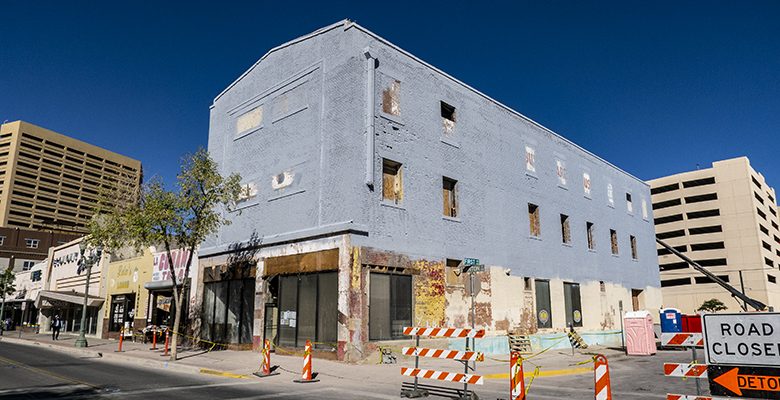 Five buildings throughout El Paso are being refurbished to assist the county combat COVID-19.

The transformation project has a budget of $6.3 million.

Another vaccination and testing site are being built in the Lower Valley on Alameda Avenue near Speaking Rock although construction there has not started. The budget for the Alameda location is of $2.1 million.

In northeast El Paso, a building near Railroad Road and Threadgill Avenue will serve as a logistics center and a testing and vaccination site as well. The budget is of a little more than $2 million for this northeast location. Pictures released by the city show construction has already started on the building to bring it up to par with the necessities for its functionality.

The testing sites are being built as a preventative measure in case partnerships for testing run out, according to Rodriguez.

Right. In case partnerships for testing run out. Just in case the other organizations offering locations for testing are as callow and selfish as the City, and decide to stop testing for the Coronavirus in the middle of the pandemic.

The fourth testing site is in west El Paso on Remcon Avenue near Mesa Street with a budget of $1.4 million. Pictures shared by the city show crews are also working to get the building in west El Paso refurbished.

The money to purchase the buildings comes from CARES Act funds. Rodriguez says they anticipate to have the buildings running by the end of December although he also says COVID-19 could put a delay on the delivering of materials or on workers.

I am a product of public schools and UTEP, but I make that out to be $13.1 million that the City of El Paso is spending on real estate. Feel free to check my math.

In a story in this week’s El Paso Inc., which, curiously, is not online, reporter David Crowder, in discussions with the City’s Director of Economic Development Jessica Herrera, tells us that the City received $19 million in federal CARES Act funds.

So, by my public school education, I calculate that the City of El Paso spent about two thirds of the federal CARES Act funds acquiring real estate, while 26% of small businesses in El Paso had already closed down and Mayor Margo fears more would close up for good.

Here’s part of the guidance from Treasury.gov:

Have you ever been part of a mass community vaccination program?

I got vaccinated for polio in the sixties. I must have been 5 or 6.

We stood in line at the high school. I remember holding my mom’s hand as the line snaked through the breezeways to the high school cafeteria. I got a sugar cube in a little plastic cup, and the sugar cube melted on my tongue. We repeated the process two weeks later.

We don’t need freestanding, dedicated, testing and vaccination centers. We have facilities, like high schools, we can use for those purposes.

The purchase and construction of five dedicated testing and vaccination centers was a waste of money that small businesses desperately need.

And it’s not like these business contractions are a surprise. Here’s an El Paso Inc. article from 22 March 2020.

The coronavirus is forcing big changes in how El Pasoans work and run their businesses as the pandemic continues to pummel the economy.

“Businesses most affected are small and medium enterprises. It appears (based on early estimates) that the average losses are about $30,000 per business in the first week,” according to an informal survey the El Paso Chamber sent its members last week.

Mayor Margo has said that 26% of all small businesses in El Paso had already closed down during the pandemic and feared more would go out of business permanently.

Instead of closing businesses, and stemming the raging tide of deaths from COVID-19, while supporting businesses with grants the federal government offered for exactly that purpose, Mayor Margo decided to fight to keep the businesses open, because his “regime” squandered the CARES Act funds acquiring real estate.

He’s trying to cover up his incompetence by letting people die.