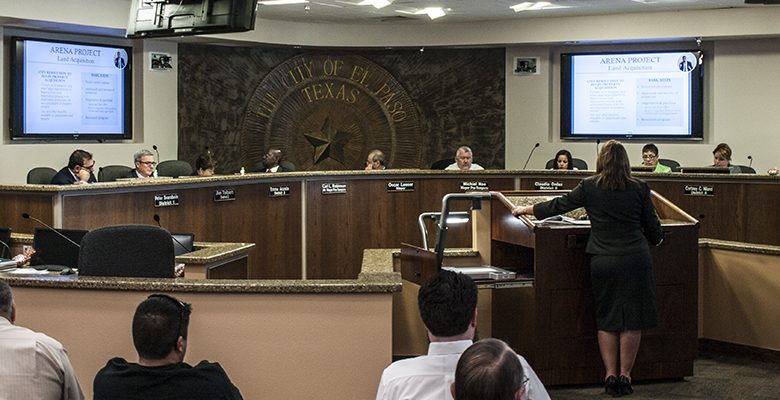 But it wouldn’t be El Paso if the City did it legally. From the El Paso Times:

In addition to [Mayor Oscar] Leeser, [District 8 Representative Cortney] Niland and [District 7 Representative Lily] Limón, City Reps. Jim Tolbert and Peter Svarzbein also attended the two closed door meetings. City council members rotated in and out of the meetings, always staying just shy of having five members, which would have been a quorum of the board. Under state law, a meeting at which there is a quorum is automatically open to the public and must be posted in advance.

According to the Texas Attorney General, in his Open Meetings Handbook:

A “walking quorum” is described in Esperanza Peace and Justice Center v. City of San Antonio.

The night before an open city council meeting was to be held, the mayor met with several city council members in the city manager’s office and spoke with others by telephone about the city budget. A decision was made that night and ratified at the public meeting the next day. The federal court stated that it would violate the spirit of the Act and render a result not intended by the Legislature “[i]f a governmental body may circumvent the Act’s requirements by ‘walking quorums’ or serial meetings of less than a quorum, and then ratify at a public meeting the votes already taken in private.” The Esperanza court said that a meeting of less than a quorum is not subject to the Act “where there is no intent to avoid the Act’s requirements.”

On the other hand, the Act would apply to meetings of groups of less than a quorum where a quorum or more of a body attempted to avoid the purposes of the Act by deliberately meeting in groups less than a quorum in closed sessions to discuss and/or deliberate public business, and then ratifying their actions as a quorum in a subsequent public meeting.

The evidence showed that the city council intended to violate the Act. For example, the mayor met with council members constituting less than a quorum to reach a conclusion; the city manager kept track of the number of council members present so as to avoid a formal quorum; the consensus reached was memorialized in a memorandum containing the signatures of each council member; and the consensus was “manifested” when adopted at an open meeting.

It’s almost like the City read this beforehand and then set out to deliberately break the Open Meetings Act.

I guess all the City Attorneys had the day off, since it’s Friday.