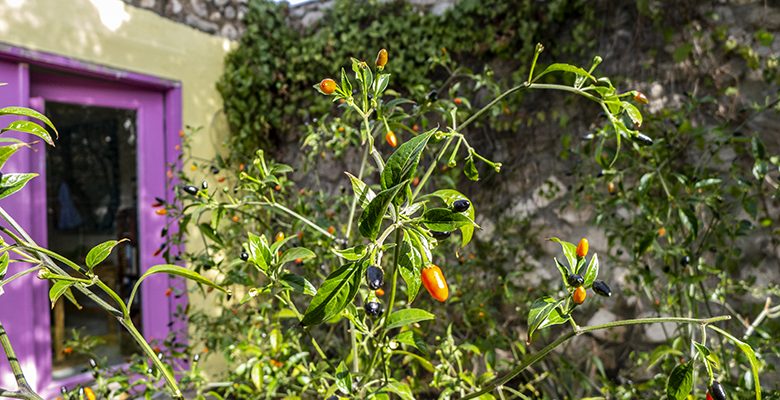 I made some salsa brava the other day. Chile pequin, onion, garlic, and tomatoes, burned in a skillet and run through a blender.

It burns late. Almost like an afterthought, in the back of your mouth, not unlike election regret.

Why do some chiles burn as soon as you put them in their mouth, and some wait till later?

Good question. I googled it.

I didn’t get the answer I was looking for, but I did find this, from our neighbors at the Chile Pepper Institute at NMSU:

Capsaicinoids give the sensation of hotness or heat when consumed by humans. Due to their heat characteristics, chile peppers are a food ingredient that is popular in Latin American, African, and Asian cuisines, while becoming increasingly important to the U.S. and European food industries. In fact, Asian culture has considered the heat sensation produced by chile peppers as one of the six main taste sensations, along with bitter, sweet, sour, salty, and umami (McQuaid, 2015). Sensations from capsaicinoids are important in our appreciation of ethnic cuisines as a whole. It is well known that some cuisines call for the use of specific chile peppers to season a dish to acquire an authentic taste (Zewdie & Bosland, 2001). The diversity of chile heat profiles goes beyond a “prickle and burn” sensation, and are reflected in unique traditional recipes developed over time on every continent. The spice trade greatly influenced what chile peppers would become predominate within a region.

Even though chile pepper heat is well known, it is mostly known only as a burn whose magnitude and intensity are measured (Cliff & Heymann, 1992). No descriptive vocabulary or lexicon exists to describe the complex nature of this sensory experience. A standardized vocabulary that objectively describes the sensory properties of a consumer product and facilitate communication across diverse audiences is useful. Examples of published descriptive vocabularies exist for apple juice, honey, pomegranate juice, French cheese to name a few (Cliff et al., 2000, Galán-Soldevilla et al., 2005, Koppel et al., 2010, Rétiveau et al., 2005).

The heat sensory lexicon described here will be welcomed by food scientists in product development and plant breeders developing new cultivars. In addition, the need for a descriptive vocabulary for the complex chile pepper heat is needed because many cultures demand a specific heat profile for the chile pepper product to be considered a “quality” product according to their culinary preferences. Studies have shown that personality and cultural factors may affect the liking of the burn intensity in spicy foods (Byrnes and Hayes, 2013, Nolden and Hayes, 2017). Published data indicates that taste perception and eating habits are related to population, genetics and culture (Risso et al., 2017). Therefore, according to personal or cultural preference, alternative heat profiles may be considered to be associated with an inferior product. For example, Asian consumers prefer a “sharp” heat in their chile peppers, while the New Mexican pod-type, a favorite chile pepper for the southwestern U.S., has mostly a “flat” heat.

If you consider yourself a chile connoisseur, or want to act like one, read the article, and learn something, too.

Now if I can only figure out why my Bhut Jolokia didn’t bloom this year.