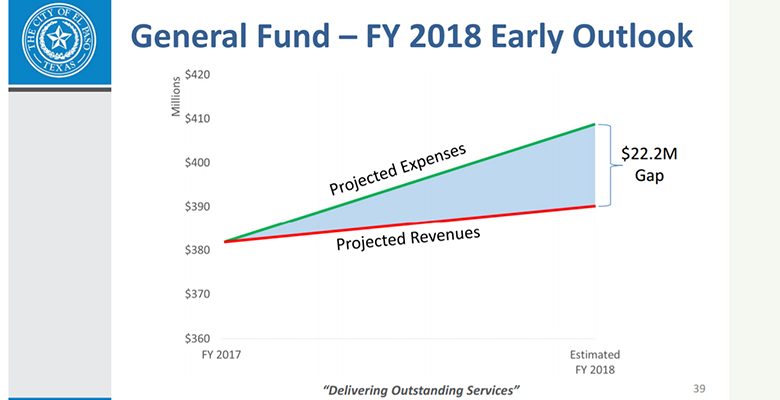 The ever-vigilant Brutus over at El Paso Speak alerted me (and all his other readers) to this slide from a city presentation.

As recent events have taught us, projections like this can be all over the place. Is this a best case scenario? Does it contemplate that ill-advised arena? A new release of Certificates of Obligation? More money to repair our deteriorating infrastructure?

Probably none of that. Those projections are probably just back-of-the-envelope estimates based on current trends in outlays and revenues.

But there’s no way the budget gap is less than what’s projected.

The short version of this analysis is that tax rates are rising into the foreseeable future, without a compensating civic benefit.

Let me remind you that four current members of City Council were driving the bus when we started heading for this cliff. They had their hands on the wheel. And now, moments from our headlong plunge into oblivion, they’re still not willing to change course.

I think ego must be a driving factor for some of them. They can’t admit they were wrong, especially when so many people were telling them they were wrong from the beginning.

Let me remind you what City Manager Tommy Gonzalez told the El Paso Association of Builders back in August of 2014, according to this report on the blog ElPasoNews.Org.

“I have never met a community that wants this much and that considers wants as necessities more than this community of El Paso.

“I come from very conservative communities like Lubbock, Harlingen and Irving where wants like libraries and parks are just that – wants.

“Here those things are considered necessities, almost a demand, without regard of how we will pay for them.

“I will work to complete the wants of the vote, but we will have to figure creative ways to pay for them because there wasn’t a plan in place for doing so as part of the vote, and that probably starts with increasing taxes.”

And now we’re looking at budget shortfalls and City Council acts surprised, like no one told them the bridge was out.

Would it be too much to ask for them to clean up their mess before they left office? They’re not thinking we’ll forget, are they?

Because the internet might forgive, but it never forgets.