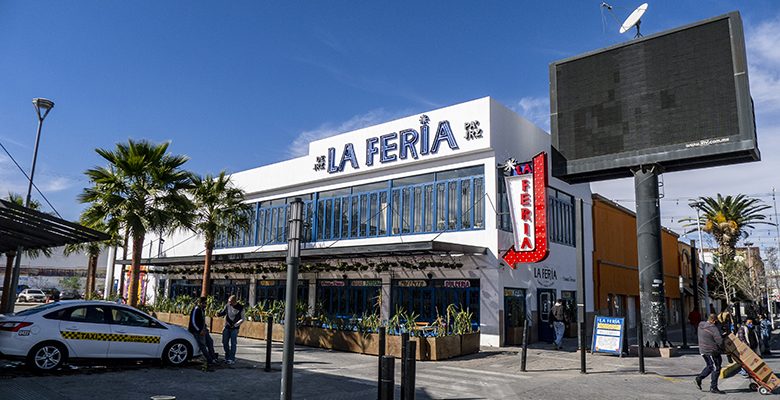 Downtown Juarez was my third place.

The third place is the place that’s neither home nor work. The place you can go with no tasks or obligations. A neutral ground.

These days some of us don’t even have a second place. We work from home.

I used to go to downtown Juarez at least once a week. Sometimes it was working, as a tourist guide. But even working as a guide, I’d try to show my clients my Juarez, the dives and back streets and cultural curiosities.

(You can read some of the reviews of my Juarez Walking Tours here.)

After the pandemic hit, I had to quit giving tours. I figgered Juarez would be a raging tinderbox of infections, with its higher population density and widespread poverty and dependence on public transportation.

And the U.S. Government closed the border for everything except essential travel, especially tourism.

I still go to Juarez every once in a while. I’ve still got some business over there, business the U.S. Government considers essential, so I still go.

Monday I went to see my Beverly Hills dentist in Juarez. That deserves a story of its own, a story I’ll tell if I ever get a picture.

Coming back, the driver dropped me off by the downtown bridge. I wanted to see what Avenida Juarez looked like.

The street was busy. A single line of cars stretched down to the tunnel. Vendors and other pedestrians walked the sidewalk. Everyone wore a mask.

La Esquina de Chihuas was open, or fixing to open. The Kentucky Club was open. I didn’t go inside either of those places because I’d just come from the dentist and I didn’t feel like eating, or starting a tear.

On the corner between La Esquina and the K Club was a new place. La Feria.

La Feria is in the space formerly occupied by La Terraza, or La Terraza Oriental. Before that it was Club Reno. If you know that, it can stay our secret.

It’s a big building, the whole block deep, and the roof used to be the terrace. Most recently La Terraza was a cantina where a body could go for a caguama of Carta and a shot of Jimador in the afternoon and not be bothered by a crowd, because there’d never be more than three or four other customers, more or less honest laborers, chatting up the barmaid. You could order a Don Pedro terciado there, but the barmaid would have to ask how to make it and the Coke came from a three-liter plastic bottle and was usually flat. Sometimes I’d sit at a table in the cool shade and watch the manager swamp the men’s room with a mixture of gratitude and envy in my heart.

Before the pandemic hit, they’d started a renovation. Blue steel I-beams has shown that someone had plans to convert the rooftop garden to an honest to God second story.

People talk about a downtown renaissance in Juarez. I never gave it much chance. But they’ve redone the sidewalks, again, and strung those naked light bulbs across the Avenida Juarez like they’ve done to South El Paso Street, like a used car lot, not that there’s anything wrong with used car lots. People are putting money into the buildings there on Avenida Juarez. The Kentucky Club is working on a new bar right next door, on the corner, with a patio on the side street. On the other side of the K Club the disco Sarawak reopened before the plague took us, and other buildings on the west side of the street were seeing work.

But the question is, who’s going to go?

They might be able to lure some tourists in from the interstate. Post-pandemic, people might prefer their own personal transportation to those shiny aluminum tubes full of other people’s microbiota. Road trips might be fun again.

But most of the through traffic on I-10 is commercial. Skimming some percentage of recreational travelers passing through won’t pay the bills.

I was giving walking tours of downtown Juarez for maybe five years, and in that time I had only a handful of El Pasoans avail themselves of my services. And my tours are/were great. Read the reviews.

When people talk about the Golden Age of Juarez, they seem to overlook one important fact: Fort Bliss used to be chock full of GIs, strangers in a strange land, who loved to immerse themselves in the culture of Mexico.

The Mexican border is now off-limits to American servicemen.

Is a revitalized strip going to lure native El Pasoans from the mega-bars on the east side?

Local government has spent years and money convincing people that Juarez is dirty, and Juarez is dangerous, and El Pasoans should keep their entertainment dollars in El Paso. The El Pasoans old enough to remember Juarez’ Epoca de Oro don’t get out much anymore.

When people talk about revitalizing Juarez, or El Paso, that always seems to be the piece of the puzzle they overlook. When City Government promotes a new nightclub district, like Union Plaza, or Kern Place, or Five Points, they never ask where the customers are coming from. Dressing up a new neighborhood doesn’t make more customers. More businesses don’t make more business.

When the City gave tax incentives to lure TopGolf to El Paso, they weren’t creating more disposable income for El Pasoans. They were just incentivizing an out-of-town business to compete with local businessmen.

The Mayor and City Manager point to those out-of-town businesses moving to El Paso as signs of progress, but they’re not progress for El Paso businesses. They’re competition.

And those new businesses on Avenida Juarez will be competing with businesses in El Paso for the American entertainment dollar. That’s okay. That’s competition, a necessary element in a market economy. But it’s a tough sell.