I visited the Grammy Museum in Los Angeles this October. It’s near the Staples center…where Hollywood Park late night horse racing used to be the best place in all of California to people-watch. My friend tells me that the Pachuco riots happened somewhere near here. They have a specific name for the area now (which fails me at the moment but if it were El Paso, they’d probably call it Glass Beach); it’s filled with statues, restaurants, branding, marquees and people. You’d have to be pretty damn convincing to entice me into wasting money for a Pro basketball game at the Staples center, but food, beer, and museums…that’s another thing altogether.
For 13 bucks, the exhibit at the Grammy Museum has so much going for it in interesting exhibits and memorabilia, I’d recommend it to anyone interested in music and entertainment history. 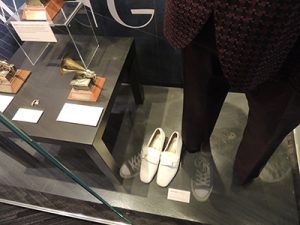 Count Basie’s portion of the museum alone was worth the price, it captivated me. He was a meticulous manager, and provides much insight to the starving artist dilemma. Eloquent in his writing, and dapper in dress…I regret that we didn’t stay long enough to pore over all the details. One of the accounting logs Basie kept showed a small beginning balance of roughly 50 dollars before one of their early tours. By the end the band was $147 in the hole.

Things did get better for Basie and his orchestra, monetarily, but the racial strife met at every turn must have been horrific for them to live through. The telegrams and newspaper headlines tell the tale of an ugly human condition. So much time has passed, and our country is still in turmoil. I reflect upon things like this with sadness…but I ain’t got time for that now…There’s 3 dudes in my party, and I’m lagging behind because I read everything before me, and there’s so much content.

Neil Diamond’s hand written lyrics for “Coming to America” kind of hit me right in my heartstrings, and I lingered there, wanting to touch the page. Woody Guthrie and Bob Dylan were well represented, with Dylan’s “Song to Woody” on yellow legal pad being a highlight. Out of the corner of my eye I saw those iconic black jumpsuits with red flourescent lines, and I wished that Daft Punk was playing at my house. Speaking of which, there’s a section of electronic instruments you can try out, electric congas ain’t that bad! 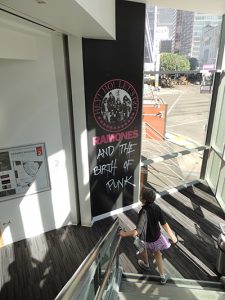 The Dobro guitar collection was fascinating, and seeing Phil Ochs’ passport was pretty cool. Hand written lyrics on scraps of paper and costumes or personal items belonging to the artists held special charm. Most costumes are presented with accompanying press release type photographs from the era in which they were worn….down to the earrings, watches and cufflinks. Michael Jackson’s gaudy suits were far less opulent than I would have imagined…more plastic baubles and rick-rack than emeralds and rubies. haha.

Of course, the main reason we decided to check out the Grammy Museum is the special Ramones exhibit. I couldn’t stop thinking about how scrawny these kids were. There’s an entire stage of Ramones instruments and Marshall amps set-up…behind the barrier. Loads of posters and report cards, fan art and photos, and don’t forget the Pinhead costume…that thing has got to stink!