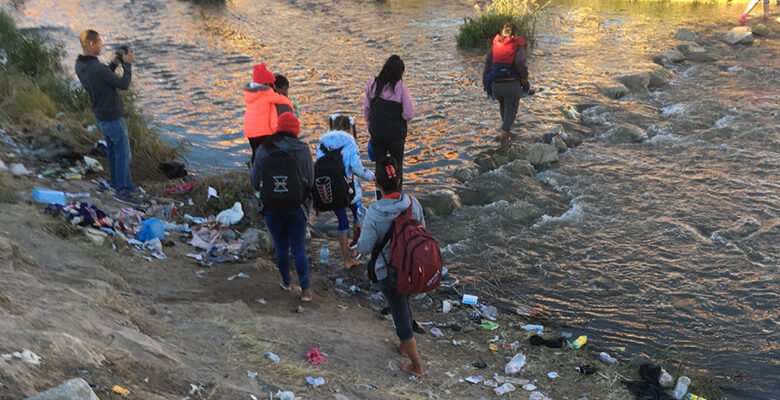 Carefully treading a crossing of slippery stones strung across the shallow Rio Grande between Ciudad Juárez and El Paso, trickles of migrants climbed up the embankment on the U.S. side.

Joining with others who had crossed from down river, the asylum seekers waited peacefully to surrender to U.S. Customs and Border Protection agents. Watching the evolving ritual were a gaggle of Mexican journalists and local residents. A young man from Venezuela with one leg hopped around on crutches while a pair of municipal cops observed the drama from a parked truck. Standing atop the Mexican embankment, a young girl gazed across the narrow river at the forming line of asylum seekers of all ages, tears welling up in her sad eyes.

If the scene that unfolded December 11 was part of an “invasion” frequently voiced by the U.S. right (and some clones in Mexico) it was a curious one, indeed: no battle between antagonistic armies was fought, and no force from either side gained territorial ground. Many of the “invaders,” were in fact children.

“I think the big piece in this is not illegal immigration in any sense of the word. They are going to apply for asylum, which is law,” said Dr. Jeremy Slack, associate professor of geography in the sociology and anthropology department at the University of Texas El Paso. “Until there is a change to (asylum) law, this is not illegal. We’re at the moment when people aren’t trying to sneak into the U.S.”

The surrender in small groups to the CBP was repeated again and again in the days after December 11 as thousands of asylum seekers from Nicaragua, Colombia, Ecuador and other Latin American nations, made their bids to enter this country from Juarez.

For the first time during the contemporary era of migrant caravans traversing Ciudad Juárez Nicaraguans constituted a particularly large if not majority group. Several Nicaraguans interviewed by this reporter described a small Central American nation teetering on the brink from government repression, police corruption, unemployment, and the lingering effects of hurricanes.

“There’s no work. Everything is expensive, and now there is no public safety… it even worsened after COVID,” said Juan Manuel, a young Nicaraguan who together with his wife and infant son spent 23 days on Mexican highways where he said bribes were extracted from migrants at immigration checkpoints before arriving in the borderland.

“This situation we have now is completely new, completely unprecedented,” remarked Dr. Oscar Martínez, local border historian and author who began studying migration in the Ciudad Juárez-El Paso borderland back in 1969 when the migrant population was almost exclusively Mexican. Martínez’s latest book, Latin X El Paso, explores the influx of migrants in the years surrounding the 2019 Walmart massacre of 23 people in an El Paso store by a white racist gunman from North Texas and the outbreak of the COVID-19 pandemic the following year.

For Martínez. a certain irony rests with recent immigration patterns, in which U.S. officials operating on “land basically stolen from (Mexico)” have admitted people from many nations seeking political asylum but systematically denied that right to Mexican citizens from states such as Guerrero and Michoacan where violence, criminality and repression also threaten the population.

“It’s not just a historical issue. Mexico is a neighbor, and the U.S. has played a big role in the violence connected to drug trafficking.”

Quickly processed by the CBP, the migrants who began surrendering December 11 were released into the U.S. with temporary permits typically good for 60 days which instruct them to maintain close contact with the Department of Homeland Security. One asylum seeker showed the reporter the corresponding document written entirely in English, which he said he didn’t understand.

Topping 10,000 asylum seekers admitted through El Paso by December 19, according to local media estimates, the thousands who crossed the Rio Grande in recent days represented the advance contingent of even larger numbers predicted when the Title 42 public emergency health law invoked by both the Trump and Biden administrations to keep out many migrants is expected to be lifted December 21.

Few if any of the migrants plan to remain in El Paso, since many have relatives and friends in other parts of the U.S.

Consequently, the Sun City’s airport and bus stations have buzzed this month with migrants on the go, especially to points east. Some endured excruciatingly cold evenings on El Paso streets. A smorgasboard of Spanish-language accents and varied words lilted through the air. Imagine voices from London, Sydney, Boston, Alabama and Los Angeles singing on the same street corner.

“Don’t you feel cold? You must be used to this,” quipped a young Nicaraguan to the reporter while the newcomer and his fellow countrymen from a hot tropical country shivered in an early winter cold spell.

Wrapped up for the weather, a middle-aged Ecuadoran woman related her journey in an anguished voice, saying her daughter and grandson had been separated from her while family members were being processed by U.S. agents; she was anxious for news about their whereabouts and welfare.

A striking aspect of this month’s migrant scene in El Paso is the emergency relief provided by local residents and non-governmental organizations from all walks of life. A similar outpouring of civil society support has likewise helped keep migrants fed, clothed, warm and alive in Juarez.

To the delight of hungry stomachs and needy hands, locals Irma Olivares and Luis Martinez showed up to a downtown migrant gathering site with food, clothing and small backpacks.

“I’m born and raised in El Paso, Texas, and I feel very sorry for these people,” said Olivares. “God says to help them regardless of their gender or ethnic…or if they’re immigrants or not immigrants.”

Next day, a truck from the El Pasoans Fighting Hunger Food Bank as well as individual Good Samaritans distributed oranges, pizzas, water and blankets. Pulling up in a car with the name Community Emergency Response Team emblazoned on one side, Suzanne Davis sprung into action. Migrants quickly snatched up the items she offered. “I’m taking things out of my own cupboards, my own closets-blankets, pillows, water. Whatever I have, they’re going to have,” she vowed in a voice cracking with emotion.

“I mobilized as of last night when the temperatures were so cold in my own house, I couldn’t imagine that people were out here with nothing…these are human beings. We can’t leave them alone.”

A large group of the December 11 asylum seekers arrived in Ciudad Juárez in a bus caravan escorted by the Mexican National Guard and Chihuahua state and local police earlier this month.

In a harrowing experience one migrant dead-panned was like a “movie,” many of the migrants were part of a group numbering at least in the hundreds which had been kidnapped earlier this month in the state of Durango and held by a highly organized criminal ring allegedly running an industrial scale operation. In several interviews, migrants recounted how they were stopped on a bus at a presumed immigration checkpoint and conducted to a complex containing several large houses where, according to one account, migrants would supposedly be transferred to a another bus because the zone was dangerous.

“In reality, the people who were doing the kidnapping were the same ones dressed like immigration officials and all that,” said a Nicaraguan migrant. Guarded by armed men, the migrants said their Mexican travel documents and cellphones were confiscated. During the next four days, while children were crying, the migrants were subjected to threats and told to pay 5,000 Mexican pesos or an equivalent in dollars; some reportedly had relatives fleeced for more money even after the initial payment. Some captives feared they would not leave the compound alive.

A drone spotted above the complex, however, finally signaled the end of a nightmare as Mexican soldiers arrived and the kidnappers fled. The migrants then made their way to Chihuahua City where another caravan was assembled, but this time the travelers were escorted by Mexican National Guard troops and police to Ciudad Juárez and the border.

While a dissection of the tangled web of inter-hemispheric politics, economics and escalating environmental destruction which underlines the current migrant phenomenon is far beyond the scope of this article, certain developments must be mentioned. As the days grew nearer to Christmas and asylum seeker crossings in El Paso continued at a brisk pace, Texas Governor Greg Abbott had a few holiday surprises of his own.

On December 13, without advance notice, the Governor ordered a new round of secondary inspections of commercial trucks entering Texas from Mexico, triggering a repeat of last spring’s traffic backups which provoked ire in Mexico and hastened moves to shift border commerce through El Paso ports of entry to the neighboring port of entry at Santa Teresa, New Mexico. Not surprisingly, a Ciudad Juárez business leader told the press that the new inspections were more good reason to speed up the move to Santa Teresa.

“Secondary inspections, that has nothing to do with this,” scoffed immigration scholar Jeremy Slack. “Greg Abbot wants to make himself known as someone who is tough on immigration.”

Far from done, the Governor released a statement December 14 informing that he had asked Texas State Attorney General Ken Paxton to investigate unnamed non-governmental organizations for their alleged role in human trafficking.

A heady week was marked by the El Paso visit of Department of Homeland Security Secretary Alejandro Mayorkas, who met with officials and a select group of journalists; an announced shift of CBP personnel to asylum seeker processing duties (and warnings of delays in border crossings during the busy holiday season); news that the Biden administration will begin reimbursing El Paso for migrant crossing expenses incurred this year, and an adverse federal court decision against the White House’s application of Title 42 to keep out specific asylum seekers, especially from Venezuela.

Finally, after days of debate and initial hesitation, El Paso Mayor Oscar Leeser declared December 17 that a state of emergency existed in El Paso due to the migrant influx, a proclamation that permits city government to request additional assistance from the state government.

Meanwhile, as more migrants awaited their chance to enter the U.S., the Christmas holiday season, colloquially known in Mexico as Lupe Reyes, rolled on. Shoppers crowded downtown Ciudad Juárez while street preachers, musicians, informal vendors and open air food stands whipped up a festive mood. The Virgin of Guadalupe was celebrated. For those with the proper documents, it now cost an extra peso or a dime in U.S. coinage to cross the Santa Fe Bridge into El Paso.

In the Texas city, traffic poured in and out of shopping malls, friends and family gathered, and downtown Plaza Lagartos dazzled like a winter glitter land in a bejeweled evening gown.

“It’s the most wonderful time of the year,” crooned a female singer from the sound system of a popular restaurant stacked with a Christmas playlist ranging from Bing Crosby to Rod Stewart and fronted with a big help wanted sign for “all positions.”

All part of the great annual holiday trek, cars, SUVs, RVs and trucks bearing plates from varied U.S. and Mexican states veered in and out of hotels loaded down for the season and headed for the interstate freeway shaking from the endless roar of semis stuffed with Christmas market cargo.

Complementing the fleet of wheels, jets took to the sky and buses chugged out of busy terminals transporting exhausted, traumatized, half-frozen and gleeful migrants with starry dreams and uncertain futures in Chicago, New York City and other fabled places of legend, lore and lyric. New stories will now be added to an open history book of a long and continuing immigrant saga. Christmas, 2022.