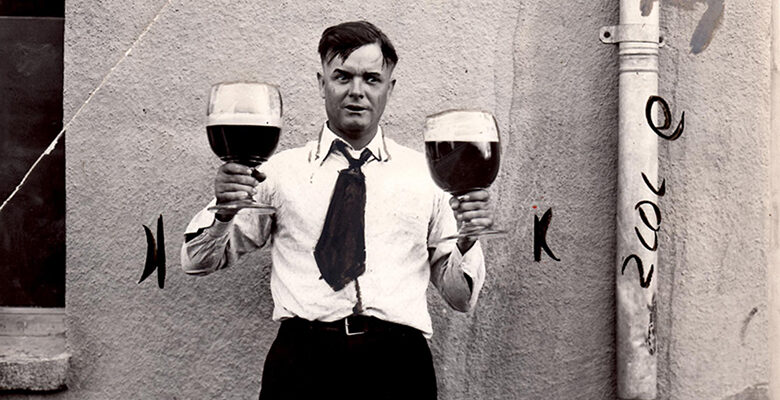 A Tale of Pacing and Endurance

Summer’s end in 1930 was proving to be a tough time to own a profitable bar in Juarez. Despite Prohibition remaining the law of the land in the United States, since the onset of the Great Depression, ignited by the 1929 Stock Market Crash the previous October, the flow of liquor thirsty American tourists and conventioneers had dried up in Juarez, and hobbled the border town’s saloon businesses. With an eye toward offsetting the loss of this border jumping customer base Hugo Bonaguidi, the American owner of the Juarez night club Lobby Bar No. 2, decided to lure El Pasoans across the international bridge by either participating in or observing a speed beer drinking tournament in his cantina. On the afternoon of Friday, September 12, 1930, approximately 500 people gathered inside the Lobby Bar No. 2, to watch 32 contestants mock common sense and their gagging reflexes as they strived toward bragging rights and a $20 gold coin ($336.88 in 2021).

The rules were simple and straight forward. Each contender had to drink, as fast as they could swallow, approximately 70 ounces of beer from a giant bulbous shaped McGinty glass snifter.

When the signal was given the adventurous souls hoisted their hefty snifters and commenced guzzling their beer, all convinced they alone possessed the determination to be the first to drain their glass dry. Rapidly ascending into the first-place position was the only woman competitor, El Pasoan Mrs. May Armstrong. Yet an early burst of energy to the front of the pack can be deceiving; while well into her lead, Armstrong faltered near the bottom of her oversized glass.

Two other participants pulled up behind Armstrong and finished with impressive speed. Felipe Lujan downed his mug in 20 seconds flat. Maury H. Maple gulped his beer in 12 ½ seconds, the world’s record time. Unfortunately, due to their notable beer spillage, both hopefuls were disqualified.

Those eliminations left 40-year-old J. A. Dent, who only recently had moved with his wife to El Paso, as the recognized speed beer drinking champion and winner of the $20 gold piece. Dent had quaffed approximately 70 ounces of beer in 22 3/5 seconds. Second place was held by P. B. Bradley whose time was 38 4/5 seconds, his prize was a $10 hat.

After the battle of the brew the beaming titleholder admitted, “I felt fine, except for the first half minute after I got it all down.”i

Dent explained that his mastery of beer consumption was imbedded in his genetic makeup, “My dad, W. T. Dent, of New Orleans, is a better beer drinker than I am, but he leans to endurance instead of speed,”ii said the grinning champion.

J. A. Dent had prepared for the competition under the training and tutelage of his wife, who briefed the press on her successful coaching strategy; on the day of the event,she forbade her husband to eat dinner. The freshly crowned champion did disclose that 30 minutes before the contest, in a similar preparation to sprinters stretching before a race, that he had drank a McGinty beer at the bar.

Minutes after the competition ended the Dents were observed celebrating on the bar’s dance floor. After dancing Mr. Dent posed for photographs and, with reputed gusto, continued drinking beer.

Dent summed up his assessment of his triumphant binge to an El Paso reporter, “This is the first drinking contest I ever entered. I’ve been in speaking contests, but they sure were different.”iii

It is a rare pleasure for champions to enjoy the luxury of resting upon their laurels. Before the evening was over disqualified contender Maury Maple challenged Dent to a rematch.

Days later it was announced that J. A. Dent had consented to defend his title against Maple; the contest was scheduled for the last day of September at Bonaguidi’s Lobby Bar No. 2. A press report stated that motion picture cameramen would be on site to film the return match,iv though there is no mention in subsequent reporting that filming occurred.

After Dent agreed to pick up the gauntlet that had been thrown down by Maple the contestants for the rematch expanded one more time. The participants would not only be reigning champion Dent and challenger Maury Maple, but would also include Felipe Lujan, the second disqualified contestant from the initial contest. The first man to complete drinking his McGinty of beer was promised a diploma recognizing him as “champion beer drinker of the world.”v

While promoting the grudge match Bonaguidi announced that the day’s events would not be restricted to male competitors, that, prior to the men’s bout, he would hold a separate women’s beer drinking contest. By the Saturday before the rematch ten women had already signed as competitors and other contenders were expected.vi In addition, the awards for the victorious would not be limited to beer drinking certificates, monetary prizes would be awarded to the winner in each category.

On the day of the rematch Mrs. May Armstrong rose to fulfill the potential she had displayed during the Lobby’s initial competition. In the first heat of the combined drinking ticket, the invigorated Armstrong bolted out of the gate and raced past the reduced field of only four women participants, draining her giant stemware in 61 2/5 seconds.

After all the foam and suds had been downed in the main event, J. A. Dent, after having successfully imbibed 72 ounces of beer in 36 4/5 seconds, remained undefeated; though the defender had failed to match his previous record of 22 3/5 seconds. The consumption rates of the two pretenders to Dent’s crown were noted to have lagged far behind the pace of the victor.

Flush with beer and self-assessment, Dent confessed as to why he had failed to match or better his previous record, “I guess I over trained.”vii

Each champion was awarded a $10 gold piece by Hugo Bonaguidi, plus, due to some sideline betting, supplemental cash prizes were dispensed by one of the spectators. Garrett Donnelly, of Ft. Worth, presented Mrs. Armstrong with $5 and pressed $10 into the hand of the reigning beer drinking champion J. A. Dent. Mr. Donnelly explained to Dent the reason for his generosity, “I won a hundred on you and you’re entitled to the extra ten-spot.”viii

In written acknowledgement of their speed beer drinking prowess and accomplishments, Dent and Armstrong also received their diplomas.ix

In 1931 J. A. Dent did not compete in Hugo Bonaguidi’s second annual beer drinking contest at the Lobby Bar No. 2. The winner that year, Ernest Jones, hailed from Austin, Texas, and consumed his beer in a dismal four minutes and 55 seconds, a quarter of a glass ahead of his nearest competitors,x but far beneath Dent’s enduring record time of 22 3/5 seconds.