A lifetime ago, some idiot with a Napoleon complex tried to paint me out in black and white…you’re too much this not that, love or hate, all or nothing.  Knowing I’m an atheist, he had the audacity to bring me a giant picture of La Virgen de Guadalupe to make me “feel better” about some latent Catholic guilt.  Since he brought it across from Juarez, I want to say it was on fuzzy black velvet, but it wasn’t, even though it really blackened my mood towards him.  I soon learned to trust him about as far as I could throw him, which wasn’t far at all.  I did throw a giant rock at him once…all the way from my door to the back fence. Unfortunately, I missed.  You cannot deny it, everybody wants to see a little blood now and then. 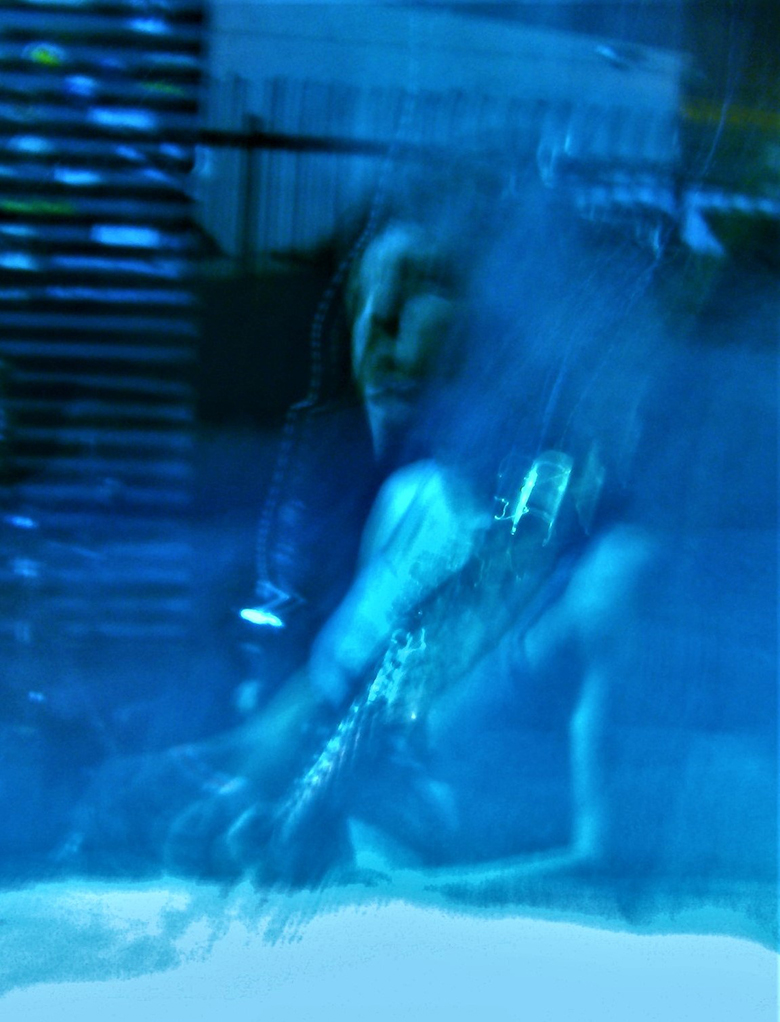 What I know to be true is I’m either intense or subdued with a sickly sweet frosting in grey tones covered in crass sprinkles that confuse and excite me, and everyone around me. There was nothing less than insult in those words…a cut and dried machete chop straight to the heart of my being, without an inkling of intuition. Take your 2-haired brush and stroke it on someone else, cabron! There was always something dead in that dude, and in his throwing down that gauntlet, revoking his projections gave me a greater sense of self. Somehow…the fog always lifts…I come in colors everywhere.

Flattery gets me nowhere, self-aggrandizing conceits notwithstanding. Patting your own self on the back is a sport sadly overstaffed to the degree of one. It’s a game filled with exercises in straddling the line for as long as possible while my brain processes the thoughts traipsing roughshod over my instincts. I feel my eyes drift askance as words spill from my mouth like an intermittent stream of bile. Interspersed with laughing jags, and nervous giggles, choking on the words as they come forward, knowing I’m gonna hate myself in the morning, if not moments after I’ve spewed. What a scary %@!+@#& death-defying feeling! The roller coaster cart tries flinging itself off the rails just to get away from the crazy, but I’m strapped in for the duration.

Losing brain cells with age, chemo cocktails, alcohol and sundry mind-expanding joyrides through youth renders me, at times, incapable of speaking well. Marble mouthed over the common vernacular…. struggling to pronounce. At worst, during chemo treatment, many items were relegated to the “thingy” column, you know…”the thing”…”that thingy” AGGHH! It felt as though I’d lost everything when the words would not grace me with their lovely presence. Depression took root and tries to grow into something sturdy, and believable… that small kernel of doubt branching out to suffocate me. Seeing through that lie isn’t as simple as just snapping out of it. Once it all turns to black you have to realize it is time again to start the frantic search for a flashlight, and hope the batteries aren’t dead. Just a faint shimmer, and an unsteady path out of that hole can be found again. Writing my way along the anemic beam of a lo-glow shaft of light was proving difficult.

Words written are infinitely more effective, as time can be taken to evoke just the right feeling, through editing. I became too aware of words that were not as easy to speak aloud, when written…posing problems of guilt, and reticence. For this reason, no…this terror, I stopped writing effectively. For myself. It’s the only way to break through. Cohesiveness had become a mystery for me…and I couldn’t bring myself ’round to sanity long enough to edit in a pleasing way. A wise woman told me just yesterday…”Don’t edit at all.” Parsing thoughts and pushing unpalatable things aside made for a diet of unsavory fakery. My writing went from Hell’s Kitchen straight to Denny’s–generic and sanitized and so unlike the original thoughts I started with, under the guise of protecting the innocent… It all turned to shit.

Loads of friends and acquaintances from the “old days” still call El Paso home. We see each other here, and there, a bit of small talk and maybe an exchange of phone numbers, then back to our thrilling or mundane lives. Richard Wright and I have known each other a long, long time. He has probably seen my volatile nature on each and every one of those meetings. He’s asked me before to write for El Chuqueño…and I tried, barely. Serendipity brought an email on a particularly difficult day. Richard, encouraging (begging) me to try again. “Write about whatever the fuck you want. Not angry. ”

Yeah, Rich knows me (“Not Angry…”), but he knows me not in a he’s my brother sort of way, since we’ve never really hung out much. Sure, I drank at the Surf Club, had a key to an obscure J-Town speak-easy, saw some great acts at Wildhare’s, played at La Tuya a few times, and always got the “Rich” treatment. Snide, boisterous, interesting, downright mean, and somehow charming all the same. Yep, Rich can make me laugh, just as heartily as any of my closest friends. He has no filter. I don’t mind exposing insecurities, vulnerabilities, anger, dissatisfaction, loveliness, or sappiness. Gimme saccharin and spit, a hug and a kick…all have a place in human nature whether you think so or not. I see strong similarities in our personalities. Maybe elrichiboy and I should slice, spit and shake hands and make that blood-brother circle complete. kumbaya…

Maybe it’s still all shit, but regaining the desire to write, how I write, without regret…That’s a gift I was having difficulty giving myself. Thanks Rich, a sincere thank you…you’ve beamed me up.