There is only one entrance into this world but there are a lot of exits out of it. Most of us don’t get to choose the exit we take. Or do we?

I read a study from the University of Buzzkill that found two or more drinks a night increase the risk of stroke. I may not take that exit but it’s definitely on the road I’m on, although in France this same road has signs saying that exit is waaaay further down the road. That may have something to do with that kilometer thingy or because they’re drinking French wine and I’m drinking Mexican tequila and Texas whiskey and Kentucky bourbon and this could go on forever.

I used to work at Whole Earth Access in San Francisco and my boss was a Hells Angel named Liz.

I just realized that there’s no apostrophe to make the ‘Hell’ possessive. Maybe that’s their hell; bad grammar.

I owned a Yamaha Seca 750 that I rode to work every day so she took a liking to me. One Friday I called in sick to play a gig in L.A. at Club Lingerie, which Johnny Depp later turned into The Viper Club. The opening band was Green River with members who later went on to form Pearl Jam. As a funny aside, on my Facebook page I wrote about them kinda being dicks and one of the Pearl Jam guys sent me a message apologizing, saying they had a big fight and broke up after that gig.

When I got back to San Francisco, a roommate said someone named Liz called and they told her I was in L.A. I told them it was nice knowing them and my funeral will probably need to be closed casket. I was prepared for the worst when she showed up on Monday carrying a crowbar and called me into a remote part of the warehouse. Liz said “Dude, just be straight with me and I’ll let you off to play gigs.” Then I realized it was a cup of coffee and not a crowbar. And that Hells Angels can be cool people, too.

Liz hired a H.A. pledge, Barbara, and their running dialogue about the previous night’s events was better than any telenovela. Liz writes for Telemundo now. No, she doesn’t, but that sentence may lead me to a completely unexpected exit. Just kidding, love you Liz. No, I don’t. It’s like I have a death wish or something. No, it isn’t.

But this label should be on everything from cigarettes to carrots. 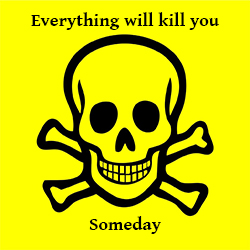 Until then, dig the ride.