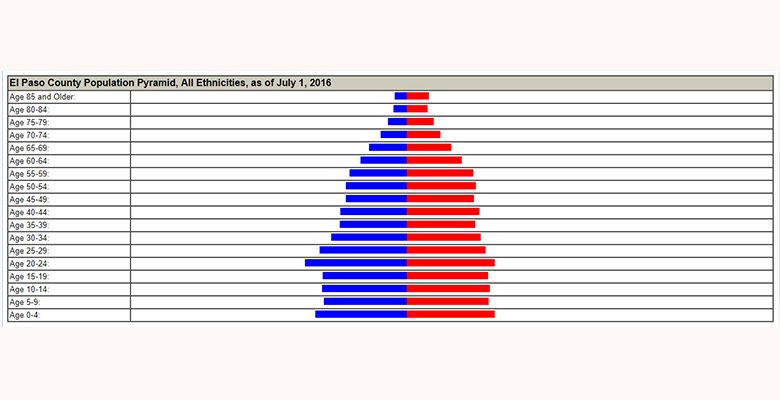 People are leaving town. The U.S. Census Bureau estimates that between 2012 and 2016, El Paso County only grew by 7,065. That’s less than one percent over four years.

Virtually all that increase can be attributed to international migration and natural growth. Almost nobody is moving to El Paso from other cities in the U.S.

That cohort probably has a higher than average rate of home ownership. The Census Bureau tells us that 61.2% of the households in El Paso live in houses that they own. For people age 60 to 64, that number is probably closer to 80 percent.

Gee, that looks like almost half a billion dollars $160,000,000 worth of property that we’re not going to be able to tax in five years, unless we get lucky and everyone dies and leaves their properties to their kids.

Okay, there are a lot of (erroneous) assumptions here. Not all of those 38,490 seniors in El Paso County live in the City of El Paso. Not all of them are going to claim their homestead deductions, either through ignorance or sloth or inertia, or personal circumstance. But, as El Paso’s population ages, more of them will avail themselves of the new deduction, and that will deplete our tax base.

And who, do you suppose, will take up the tax slack those seniors leave behind?

You’d think that the committee telling the bus driver how to drive the bus would see the cliff ahead and tell him to slow down, or at least get out of the ditch. But we’ve got the pedal to metal, and City Council is trying to commit us to spending as much as we can before the taxpayers figure it out.