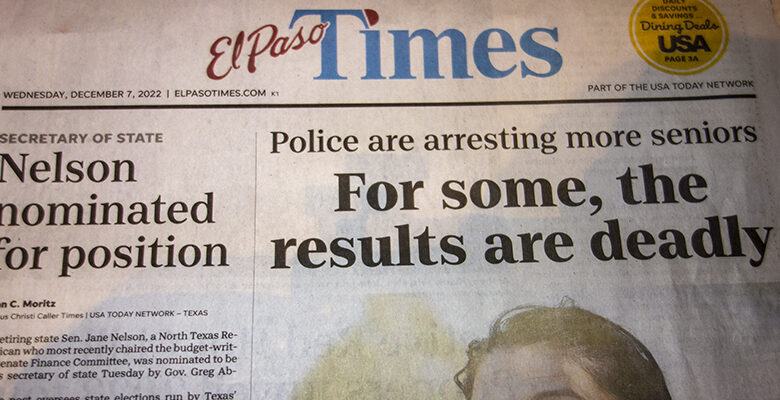 One night in October 2021, Armando Navejas wandered away from his home in El Paso. The 70-year-old had Parkinson’s disease and dementia, and his family said he could barely speak.

Scared for his safety, his wife, Josephine, called 911 for help tracking him down. By 2 a.m., Navejas was back in front of his house, shirtless and ambling around. According to a video from a neighbor’s home security camera, an officer approached, shining a flashlight in Navejas’ face.

Navejas appeared agitated, picking up a string of wooden blocks and walking toward the cop, who retreated behind a parked car. Navejas threw the wood limply toward the officer; it landed on the windshield. When Navejas turned away, the officer walked around the vehicle and fired a stun gun at Navejas’ back. His body went rigid. He fell face-first onto the sidewalk.

“They acted like he had a gun,” she said in an interview. “This is a 70-year-old man who is lost in his own head. I just don’t understand it.”

You know the El Paso Police Department falls under the purview of the City Manager. Do you think the City controls the editorial policy of the El Paso Times?

Remember, former El Paso Times Editor Bob Moore separated from the paper shortly after publishing an article critical of the City’s response to demonstrators in Duranguito.

(I found the whole story about the tasing on USAToday.com. USA Today is published by Gannet, which also owns the El Paso Times.)

El Paso Police say their officer was responding to “a call of an assault” the night of the tasing. Josephine Navejas told local reporters and her attorney that she called 911 over a missing person and that she alerted the dispatcher that her husband had dementia and Parkinson’s. The department has refused to release the 911 call from that October night or the bodycam footage from officers on the scene, saying it would interfere with an “open case.”

January, 2022, was the month that El Paso Police tased a 10-year-old girl. That incident made national news.

But the taser isn’t the El Paso Police Department’s only solution for dealing with individuals having mental health crises.

Remember El Paso Police Officer Jose Flores shot and killed Daniel Saenz as he lay handcuffed in the sallyport of the El Paso County Jail in 2013.

Think about that when one of your loved ones is having a crisis, or you see the party lights in your rear view mirror.