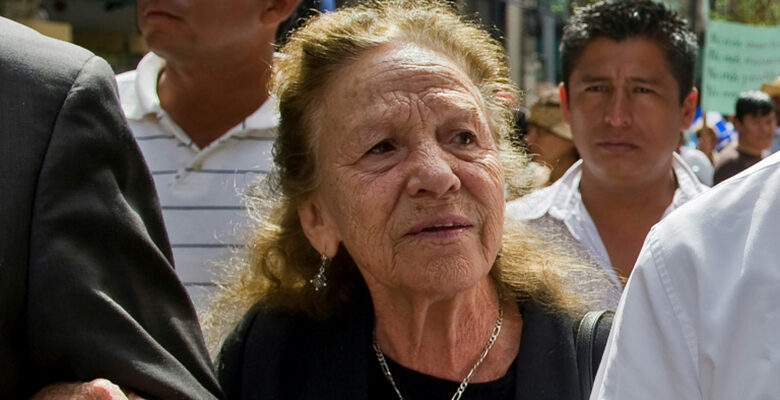 A giant of a woman in Mexican political life, civil society and human rights advocacy passed away on Easter weekend. The founder of Comité Eureka in 1977, Rosario Ibarra de Piedra was the trailblazing mother of family-led movements demanding answers about loved ones who were forcibly disappeared by government agents.

As a middle-aged housewife in Monterrey, doña Rosario’s activism began in 1975 after her son Jesús, who was a medical student linked to the guerrilla September 23 Communist League, was captured and disappeared by Mexican security forces.

But to this day, the fates remain unknown of Jesús Piedra Ibarra and hundreds of others detained and disappeared by Mexican police and soldiers during the so-called Dirty War waged by the Mexican government against political opponents and dissidents, armed and unarmed,  between the late 1960s and early 1980s.

Banding together with mothers of other forcibly disappeared young people, doña Rosario and her group burst onto the public stage during the late 1970s, boldly challenging an authoritarian state with public demonstrations, hunger strikes and incessant calls for the safe return of loved ones. Fearless and tenacious, doña Rosario personally confronted Mexican presidents in her search for Jesús and others abducted by the state.

In a 2002 interview with this reporter, doña Rosario credited Comité Eureka’s struggle for obtaining the release of 148 people detained during the Dirty War, including individuals she said told the human rights group of seeing still disappeared people in government jails during their imprisonment.

At the time of the interview, the presidential administration of Vicente Fox had created a special prosecutorial unit to probe the Dirty War and bring charges against human rights violators.

In a fiery assessment, the indomitable activist dismissed the special prosecutor’s office as a “fraud, among many the government has committed against us,” pointing to President Fox’s strong support for the military. Careful to distinguish her organization’s morals from the state’s, doña Rosario declared that Comité Eureka even fought for justice in the cases of some soldiers and police who, in a Machiavellian twist, were forcibly disappeared as well.

“We want to be totally different. We want to end this terrible crime which is forced disappearance, and torture also.”

Though already getting along in her years, doña Rosario was lively, lucid and luminous – a live wire electrifying a sullen landscape and crackling into a long and haunted night. A petite woman who had weathered decades of battles, doña Rosario’s voice still boomed with a forcefulness born from outrage and determination.

Summing up Comité Eureka’s struggle, she said: “We’re militants. We’re fulltime activists. We’re always doing something. We’re always denouncing the government. We’re always working. We can never rest. We say that every day which passes is another day to struggle for the freedom of our children.”

On a broader political level, the movement initiated by doña Rosario and fellow mothers of the disappeared is widely credited for helping prompt the release of 1,500 political prisoners, an amnesty law and electoral reforms during the administration of President López Portillo (1976-82), even as the Dirty War proceeded.

Internationally, the Mexican mothers garnered the support of Amnesty International and U.S. trade unionists, among many others. Meriting recognition, doña Rosario was nominated several times for the Nobel Peace Prize.

Growing up with an extraordinary role model of a mother, doña Rosario’s daughter, Rosario Piedra serves as the current president of the National Human Rights Commission.  On Easter weekend, the home page of the federal agency’s website featured a photo of a younger doña Rosario, lauding her as a “pioneer in the defense of human rights, peace and democracy in Mexico.”

Nowadays, Comité Eureka’s slogan “Vivos se llevaron, Vivos los queremos,” (They were taken alive! We want them back alive!) lives on among the dozens of Mexican organizations and family collectives that struggle against deadly odds to clarify the fates of tens of thousands people forcibly disappeared in Mexico during recent years in the context of the so-called drug war.

Weighing in on the gravity of forced disappearance in Mexico, the United Nations Committee on Enforced Disappearances issued a report this month that exhorted the Mexican state to take stronger measures to eradicate the crime and end impunity.

“Impunity in Mexico is a structural feature that favors the reproduction and cover-up of enforced disappearances and creates threats and anxiety to the victims, those defending and promoting their rights, public servants searching for the disappeared and investigating their cases, and society as a whole,” the Committee said in a press release.

In 2017, the Mexican Congress finally passed a law against forced disappearance, but as the United Nations report grimly signals, the present succeeds the past in a grotesquely inflated and mutated way.

Regarding the unfinished business of the Dirty War, the López Obrador administration has convened a truth commission to examine human rights violations committed by the Mexican state between 1965 and 1990. The initiative follows previous investigations and legal cases carried out by the Fox government between 2001 and 2006, Mexico’s official National Human Rights Commission, the Inter-American Court of Human Rights, and the Guerrero State Truth Commission.

While these efforts made strides in uncovering the machinations of the Dirty War and identifying government officials linked to forced disappearance and murder, the handful of legal cases which resulted, including against former President Luis Echeverría (who, ironically, at age 100, has outlived doña Rosario) and deceased, former federal security chief Miguel  Nazar Haro (accused of Jesus Piedra’s disappearance), wound up stalled by lawyers and blocked in Mexican courts, while hundreds of victims remained disappeared and their relatives in tormented suspense.

Augmenting her street activism, doña Rosario was a political trailblazer. In 1982, she became the first woman to run for the presidency of Mexico, representing the small Revolutionary Workers Party. Never one to quit, she mounted a second, unsuccessful run for the nation’s highest post in 1988. Separately, however, the human rights defender twice managed to gain a seat in the lower house of the Mexican Congress and later served two terms in the Mexican Senate between 2006 and 2012.

Among her many causes, doña Rosario voiced support for the 1994 Zapatista uprising in Chiapas state, protested against electoral fraud during the presidential elections of 2006 and 2012, and served on a commission to resolve (unsuccessfully) the forced disappearances of two leaders of the guerrilla Popular Revolutionary Army in Oaxaca in 2007.

Invited by the relatives of disappeared and murdered young women, she once traveled to Ciudad Juarez to learn about the femicides terrorizing the northern Mexican border city. In her 2002 interview, doña Rosario characterized the gender violence as “another terrible crime…it seems to me a tremendous cruelty, extreme sadism.”

In 2012 doña Rosario and her comrades witnessed the opening of a museum in Mexico City, The House of Indomitable Memory, a space dedicated to exhibiting stories of the Dirty War and forced disappearance.

The death of doña Rosario was huge news in Mexico over the long Easter weekend. Stories, remembrances and commentaries gushed forth from the nation’s major media outlets. At an Easter day session, the lower chamber of the Mexican Congress honored a former colleague and a national legend with a minute of applause.

“We will always remember the profound love for the sons and daughters and the solidarity with those who suffer for the disappearance of their loved ones,” President López Obrador said in a statement posted on his website, recalling that his own mother cast her vote for doña Rosario back when the Monterrey mother ran for the nation’s office.

After she was awarded a civic medal by the Mexican Senate in 2019, doña Rosario turned it over to López Obrador with the condition that she would accept the prestigious award back when the truth was known about what happened to her son Jesús and the other forcibly disappeared young people of his generation. Unfortunately, doña Rosario never lived to see that day.

In an editorial on doña Rosario’s death, La Jornada news daily referenced the medal episode. According to the newspaper’s editors, “…undoubtedly, the greatest homage that the Mexican state could render to one of its most illustrious citizens rests with locating the 96,000 people who remain disappeared, and in undertaking all the dispositions within its reach to eradicate this ill.”

With about 100 people in attendance, Rosario Ibarra de Piedra was buried in Monterrey on Easter Day, 2022.

Quoted in Proceso magazine’s web news service, a survivor of forced disappearance said she was delivered into the world twice, the second time by doña Rosario, whom she considered her mother.

“There is much left for (López Obrador’s) government to do,” Claudia Piedra, doña Rosario’s youngest daughter, was quoted in La Jornada. “It has done a lot, but there can’t be a true transformation if the problem of the disappeared continues.”