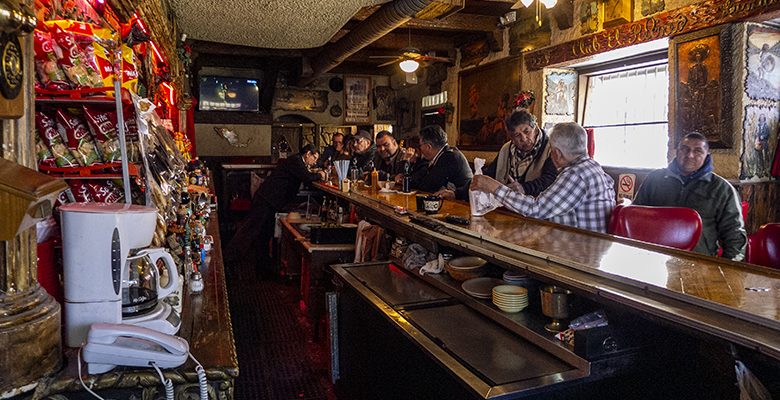 El Recreo opened in 1921. This year we should be celebrating its centennial. But El Recreo is closed.

El Recreo was one of the oldest bars in Juarez. Maybe the oldest, but, if I had to guess, I’d say the oldest bar in Juarez is the Buen Tiempo, fifty feet from Plaza de Armas, the main plaza downtown, in front of the mission that dates to 1659. Hard to believe that people were going to church for 360 years without a place to drink afterwards.

Records are fuzzy. The Kentucky Club claims to be the oldest bar in Juarez, but the original location of the Kentucky Club was on dieciseis, just west of Lerdo, on what used to be the trolley route, so any claim to longevity that the K Club makes should include an asterisk.

El Recreo was anonymous. El Recreo didn’t have a sign, except for the Ladies Bar neon that might or might not be lit at night. In the old days, drawn by the Ladies Bar sign, I was in the Recreo three times before I knew the name of the bar. Of course I’d heard of it. El Recreo had a legendary, mythical, status, a bar the cool kids hung out at, the creatives, the bohemians, an underground subculture that wore their individuality like a badge.

When I was giving tours of downtown Juarez, El Recreo was one of my favorite stops. I’d stop on the corner of Madero and dieciseis, and point across the street to the Cine Victoria, and then turn around and ask the clients, What do you suppose lies behind this door?

And I’d open the anonymous door to reveal a jewel, bartenders in jackets or vests and bow ties, Don Antonio at his regular place in the middle of the bar, drinking coffee, and playing dominoes, or shooting poker dice for drinks, double or nothing, because he didn’t drink himself.

The jukebox played CDs, oldies, Jose Alfredo and Los Bukis and Chente, Frank Sinatra, the obligatory Creedence and the Doors, Rocio, and Mexican artists too obscure for my cracker upbringing to now recall.

I took my wife there before she was going to be my wife.

After we got married, I almost never went to El Recreo at night. One Friday, after a tour, I stayed in Juarez. My wife and kids were out of town, and it’s hard to go home to an empty house. I walked over to El Recreo. The place was packed. I wedged myself between a table and the back door, and tried to make myself small. I was alone, without clients to entertain, and the bartenders were too busy to talk.

In March of 2020, Don Antonio died. I read it in NorteDigital.com.

El Recreo had two doors that stayed closed, and no windows that opened. Climate Controlled used to be a recommendation. Now, with an airborne plague afflicting humankind, sealed spaces present their own risks. I don’t know how Don Antonio died, but spending thirteen hours a day in an enclosed space with a rotating cast of characters won’t improve one’s chances.

I wonder about the bartenders. Javier, and the two and a half Chuys. When they die, they won’t get a mention in the media.

I wonder about all the bartenders in all the cantinas in Juarez, those uncelebrated “essential” workers who don’t get parades, or the gratitude of a nation. They’re all friendly, mostly, and I like to think that our relationships aren’t strictly commercial, I’d like to think that we’re friends, but if they passed, I might not hear about it, like I don’t know the fates of all the old customers in the bar I used to own.

The cantinas were closed for a while in Juarez, out of fear of the plague. They’re open again. For the bartenders in the dive bars I used to frequent in downtown, I’m sure the oscillation was between lean times and leaner times.

Maybe the truth is that all relationships are fleeting, and no one will miss you when you’re gone.