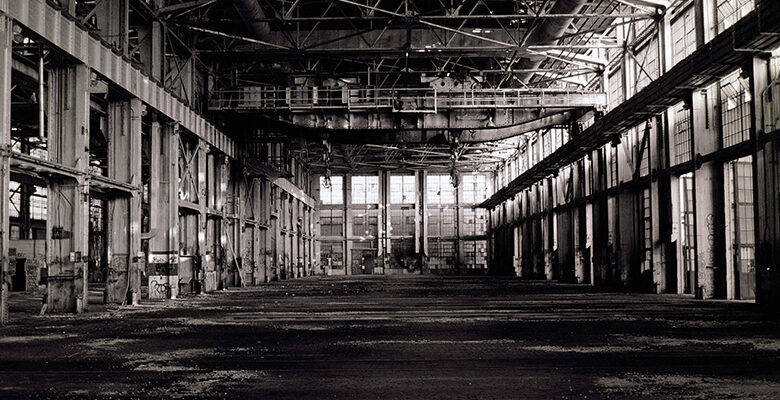 The Albuquerque Rail Yards are a massive complex sprawling over 27.3 acres and sitting (mostly) idle off 2nd St. in the old Barelas neighborhood. Established by the Atlantic and Pacific (A & P) railroad in 1880 after Albuquerque was designated as the division point between the A & P and Santa Fe Railways, the chief function of the complex was to maintain and repair locomotives. However, most of the shops and offices were constructed between 1914 and 1924, by which time the Santa Fe Railway, following bankruptcy in 1883, had re-emerged as the Atchison, Topeka and Santa Fe Railway, absorbed the A & P, and gained ownership of the yards. By 1919, one-quarter of Albuquerque’s work force was employed at the rail yards and most of the city’s commerce owed its existence to the railroad. At present, there are 14 buildings, mostly clustered in the northern part of the yards; to the south is an operational turntable, built in 1915, which was used to rotate trains as they entered or exited.

Of the buildings constructed between 1914 and 1915, only the 35-stall roundhouse and a storehouse stand, while buildings for freight car repairs and a powerhouse have been demolished. However, one of the unique things about the Albuquerque Rail Yards is its state of preservation; virtually every building built from 1916 onward remains, including flue (1920), boiler (1923), blacksmith (1917), and machine (1921) shops, an assembly hall (1922), a firehouse (1920), and a car garage (pre-1931), among others. The rail yard’s buildings were at the forefront of industrial technology and the 165,000 sq. ft./3.8 acre machine shop has been considered comparable to the 1922 Ford Motor Company Glass Plant, which scholar Grant Hildebrand said was “the single factory which carried industrial architecture forward more than any other.” For example, the machine shop’s two-story traveling cranes, one of which could hoist 250 tons, were incorporated into the structure of the building itself. Further, all rail lines, whether inside or outside buildings, ran north-south while a transfer table (pre-1919) for moving locomotives between buildings ran east-west, as did the overhead cranes. Thus the rail yard was sturdy and highly-efficient, with the massive locomotives moved easily from one area to another.

Albuquerque’s early designation as a division point was important because it ensured that the most significant railroad activity in the region would be centered in the city, with the next-nearest division points located in Las Vegas (north), Gallup (west), and San Marcial (south). In the late 1800’s and early 1900’s, a locomotive generally left for a one-way trip of only 100-150 miles in the morning, underwent some basic repairs upon arrival, and then returned later in the day to its home shop for further maintenance. Fire tubes, flues, smoke boxes, and boilers all had to be cleaned daily and ash residue left behind by incompletely burnt coal had to be continually removed.

While early locomotives only managed 40,000 miles between major repair-work, 20th Century engines routinely did 400,000 miles, which put them in the shop for a complete overhaul every year or year-and-a-half. Shops such as those at the Albuquerque Rail Yard completely dismantled locomotives, painstakingly cleaning each part of the engine, lathing wheels, manufacturing replacement equipment, patching and mending and then testing and inspecting the entire engine before sending it back out. A well-cared-for engine might last 15 years and, at its peak, the rail yards tore down and re-built about 40 a month.

Following a steady decline through the Depression, the rail yards experienced a record-high employment of 1500 workers during WWII, when the switch from steam to diesel engines was temporarily halted. Once construction of diesel engines resumed, the rail yards were still used for repairs but, by the mid-1950’s, the massive complex was mostly utilized for maintaining rail lines. The rail yards were largely a storage facility by the time they were completely shut down in the 1990’s. In November 2007, the City of Albuquerque purchased the site with an aim towards restoration. Since that time some TV shows and movies have been shot in the facility, including Crash and Terminator 4, which I’ve heard is responsible for covering the windows in the fake grime which is still visible.

One goal of restoration is to create a space for the WHEELS Museum, which would act as a repository for much of the rail yard’s history. Of course, the rail yards are too big for one museum, so some sort of mixed-use residential/commercial area is being envisioned, including restaurants, shops and a concert hall. WHEELS fundraisers are being held and meetings with the city continue. At a Rail Yards Advisory Board Meeting early last year, the President of the future WHEELS Museum said the yards contain some of “most important historic buildings in the state of New Mexico.” Here’s to hoping the process of rehabilitation gets underway quickly, before those holes in the roof get any bigger.

Following a steady decline through the Depression, the rail yards experienced a record-high employment of 1,500 workers during World War II, when the switch from steam to diesel engines was temporarily halted. Once construction of diesel engines resumed, the rail yards were still used for repairs. However, by the mid-1950s, the massive complex was mostly utilized for maintaining rail lines.

Then, in November 2007, the city of Albuquerque purchased the site with the aim of restoring the grand buildings. Since that time, many TV shows and movies have been shot in the complex, including Breaking Bad, Crash, and Terminator Salvation (which I have heard was responsible for covering the beautiful colored windows in the fake grime which is still visible). This did not halt the deterioration, but it did keep attention on the rail yards. Even better, beginning in 2014, the city has hosted a weekly market every Sunday from May through October–as well as other special events throughout the year–in the refurbished blacksmith shop, bringing thousands of people back to what was once the beating heart of Albuquerque. (https://railyardsmarket.org/)

Beyond continuing to shore up buildings and patch holes in roofs, another goal is to maintain an enhanced space for the WHEELS Museum, currently located in the old Storehouse on the edge of the rail yards. WHEELS (an acronym for “We Have Everything Everyone Loves Spinning) contains everything from vintage cars to planes, but is also a repository for much of the rail yard’s history. For now, WHEELS fundraisers continue to be held and meetings with the city are ongoing. At a Rail Yards Advisory Board Meeting, Leba Freed, President of the WHEELS Museum, said the yards contain some of “most important historic buildings in the state of New Mexico.”

You can visit the WHEELS Museum every Monday -Thursday from 9 AM to 12 PM and on Sunday from 10 AM to 2 PM. Museum hours are subject to change without notification and during special events, so maybe call (505) 243-6269 prior to making the trip. More information can be found at the WHEELS Museum website.

Detailed information on the rail yards turned out to be pretty hard to find. By far, the best sources were the WHEELS Museum itself, which has some great content on their website, including the best overview of the rail yard’s buildings I could locate. Another good source was the City of Albuquerque itself, which once had some information online regarding the redevelopment plan, including a bit of history. If you want to get serious about your research, the quote comparing the machine shop to the 1922 Ford Motor Company Glass Plant was from: Grant Hildebrand, Designing for Industry; the Architecture of Albert Ahn, (Cambridge: MIT Press, 1974), pg. 111.