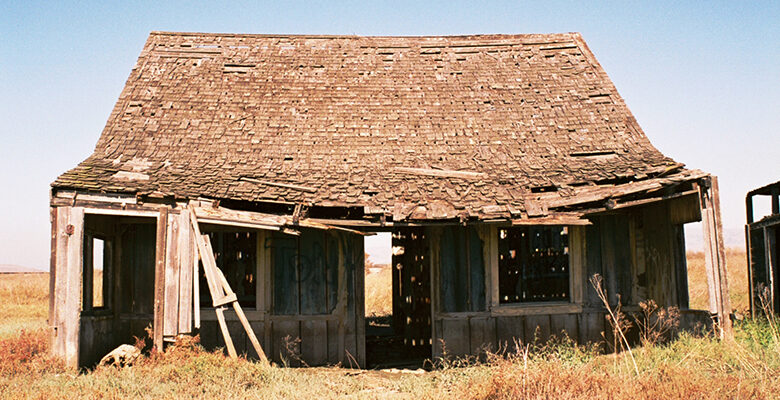 My Mother Was the Marshland

My mother was the marshland. My father was the railroad. I was born in 1876 after they met on Station Island. Some now say that I am a ghost town, sinking in the mud. Maybe I am, but I hate the name. So do the people who remember. They remember the independent spirit, the close friendships, the happy days and their paradise that was lost. ~ Drawbridge

It’s rare that you find a fully abandoned, 100% ghost town in the midst of one of the most urbanized areas in the country, but such is the case with Drawbridge, California. Near San Jose and flanked to the north by San Francisco and Oakland, Drawbridge is rarely visited despite being surrounded by millions of people. In fact, I lived in Oakland and never even knew about it. The reason for its low profile is a good one; Drawbridge is located in a salt marsh and sinking further into the mud with each high tide. It is also part of the Don Edwards San Francisco Bay National Wildlife Refuge, which is home to several endangered species and thus closed to the public. The refuge is patrolled by US Fish & Wildlife Service personnel, who I encountered on my trip while they were trying to apprehend some other “visitors.” Why didn’t I get busted? Because, through leveraging my vast City of Dust empire, I received legitimate access and could thus arrive via boat instead of taking the illegal and dangerous route.

Like so many other ghost towns, Drawbridge was brought to life by trains. In 1876, the South Pacific Coast Railroad built a two-room cabin for a bridge tender, Mr. Mundershietz, on a new stretch of line that by 1880 would link Alameda to Santa Cruz. The cabin was deep in marshland, between Coyote Slough and Warm Springs Slough, on a chunk of relatively solid ground soon known as Station Island. Because the train would stop at Station Island, people could now get there, and because there were lots of ducks around, it was hunters who first wanted to get there. The railroad even provided an old baggage car and chair car as free accommodation for hunters.

So it was that the earliest buildings in Drawbridge were gun clubs, and there were many of them. The first structure, after the bridge tender’s cabin, was the Gordon Gun Club, probably built in 1880. Incredibly, given the transience of wooden buildings in Drawbridge, I believe its ruins are captured in the b&w photo above, based on a shot from the 1980’s, when it was still easily identifiable by its rounded Dutch roof and square nails.

After the Gordon Gun Club came The Sprig Duck Club, The Widgeon Gun Club, The Twilight Gun Club, The Tony Gun Club, and cabins with names like the Precata, Recreation, Harbor View, Sorry, Don’t Worry, Clambake Club, Julie Lodge, and more. As Drawbridge was often reached by boat, boat-building and repair was another typical pastime, as were swimming and fishing, naturally.

Some people actually lived in boats, known as “arks,” which were put up on pilings. One was a 50-person Matson Line lifeboat that had a cabin built in top of it. Drawbridge’s structures, all on pilings to stay dry when the tide came in, were along the railroad tracks, which became known as “Main Street” or “A Street.” Walkways were extended from front doors straight to the tracks, a privilege for which the railroad charged $1 a year. There were also “high tide parties,” when foot paths were flooded and neighbors would visit each other by boat. Toilets, unfortunately, went right into the marsh.

In 1902, the Sprung Hotel was established. As many as 500 people would come to Drawbridge each weekend, and Mrs. Sprung would often rent her own bed and sleep in the bathtub. In 1920, with the arrival of Prohibition, she made homebrew for 25 cents as quart, as well as wine. The Hunter’s Hotel was built by Louis Demit, also in 1902, and later run by his wife, Susan. Whether Louis died or the couple divorced is unknown. Despite being smaller than the Sprung, the Hunter’s Hotel had a large ballroom decorated with stuffed birds and windows all around. It also contained a baby grand piano.

As one man familiar with Drawbridge, William McCall, Sr., said, “You wouldn’t go down there if you weren’t a different breed of cat. It wasn’t the easiest place for access; every duck you got you worked for. And like those people that went down, they were in another world. They were completely away from civilization.” Or, as the last resident of Drawbridge, Charlie Luce, put it, “…it wasn’t a disease, that Drawbridge mud just calls to you!”

By 1926, about the peak of Drawbridge, there were 90 cabins and five passenger trains coming through each day. Later, rumors circulated that Drawbridge was filled with gangsters, gamblers, and prostitutes (with a roulette wheel at the Hunter’s Hotel to decide which lady of the marshy night would be yours!), but it was mostly populated by doctors, dentists, and store owners, many with a passion for duck hunting. Even so, mothers on the north end of the island warned their children to stay away from the south, while the south considered the north “stuck up.” By the way, there really was a roulette wheel, but residents said the only thing wagered on was waterfowl.

Then Drawbridge began to sink more quickly as the surrounding sloughs were cut-off by dikes or drained. Wells for fresh drinking water had to be drilled deeper. Sewage from Bay communities began to foul the water around Drawbridge, and the ducks decided it was time to leave. Next the Great Depression arrived and, after that, vandalism. Newspapers began referring to Drawbridge as a ghost town, with cabins full of antiques simply left by their owners. This was not true, so signs were hung on cabins: “Please don’t shoot my house,” and “Dear thieves and vandals, Please do not break into this little house. It’s the only home we have.” Sadly, the signs didn’t always work.

The Sprung Hotel closed in 1930. It would finally collapse in 1968. Hunter’s Hotel burned in 1943, possibly from a spark off the cigar of then-owner, Barney Panella. So Barney constructed the only two-story building ever seen in Drawbridge on the site, complete with another ballroom and yet another baby grand piano. It would burn in 1984. Throughout the history of Drawbridge, fire has been perhaps the gravest danger, even surrounded as it is by water.

By 1940, only 50 cabins remained and the marsh was so polluted it could not be swum in. By the end of the decade, the sloughs were too silted-in to navigate. The years passed and there were more fires, some thought to be for insurance pay-outs. The train no longer stopped unless it was flagged down. In the 1960’s, partiers began to make the trek to Drawbridge. Some of these people, called “dopers” by residents, would try and stay in empty cabins only to be chased out with a shotgun or an ax. In 1970, the railroad station was torn down.

Yet some old-timers held on, until at last there were two. Nellie Irene Dollin, who had first come in 1910 and bought a place in 1932, left in 1974. Her house was broken into by two drunken kids one night while she was home with her granddaughter. She had no more trouble after firing her shotgun out the window, but the newly-christened “Shotgun Nellie” had had enough and moved to nearby Hayward. Charlie Luce visited Drawbridge in 1930, but didn’t go in on a cabin—The Sunset Club—until 1950. It was torched in 1964. Charlie and some friends bought another house and he began living in Drawbridge full-time with Quincy, his dog. He was bought out by the US Fish and Wildlife Service in 1979. His former home burned down in 1986.

These days Drawbridge is almost more liquid than land, a condition that will only accelerate as the rate of sea level rise increases. Everyone on this trip left wet, muddy, and cold…but happy. One iPhone was submerged (while in a hip pocket!), but at least no one drowned. People are still trying to have parties, too, and continuing to damage or destroy buildings, but now they’re usually getting caught before the party even gets going. While it might appear that there are a lot of structures remaining, compared to what was here 20, 30, or 40 years ago there is relatively little. Hopefully, what’s left will persist until Mother Nature fully reclaims what was once hers alone, and the ghost town in a salt marsh finally vanishes entirely into the mist of the San Francisco Bay.

Many thanks to the DESFBNWR USFWS for very graciously letting me access Drawbridge. The public (which also includes me, now) is asked to please obey the “No Trespassing” signs. That’s the best way to protect Drawbridge and honor its history. A special thank you to D. Thomson for providing a boat and navigation skills and generally making it all happen. Virtually all information from this post came from “Drawbridge, California: A Hand-Me-Down History” by O.L. “Monty” Dewey. If only every ghost town had such a thorough and well-researched oral history written about it. Thanks again, D.T.!