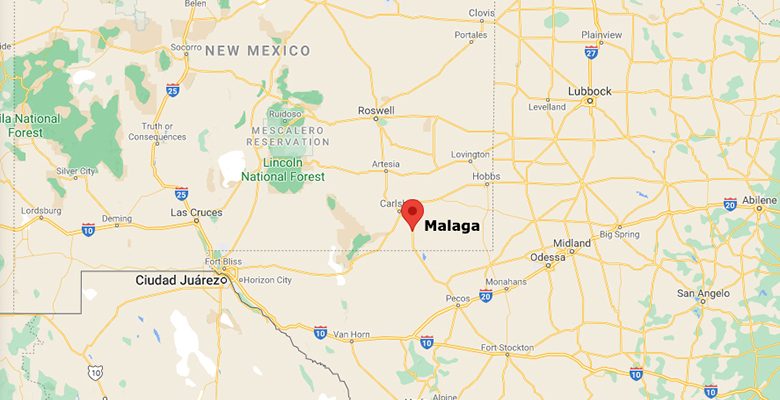 We’ve withstood some pretty fierce winds in the region lately. But so far, fortunately, no wind has been powerful enough to completely blow a community from one end of the map to the other. What Mother Nature hadn’t accomplished, however, the Associated Press (AP) achieved in a Friday, May 21 story about the identification of a woman’s remains in Eddy County, New Mexico. Here is the lead sentence of the story:

Hmmm. An examination of any map will reveal that southeast New Mexico, Eddy County and Malaga, the small community near where the remains were discovered, are quite a distance from the Mexican border.

A drive to Malaga from Paso del Norte border crossings entails more than two hours without stops. Malaga is closer to the Texas border than the Mexican border; the nearest river to the small community is the Pecos, not the Rio Grande/Bravo.

Malaga is in the vicinity of Carlsbad, New Mexico, as in the famous Carlsbad Caverns, flapping bats and the “temporary” nuclear waste dump known as WIPP that the U.S. Department of Energy wants to expand and basically make permanent.

We can merely conclude that at least the personnel of the Current-Argus know where they live.

One might speculate on the reasons for the AP’s big boo boo-overworked or inebriated staff, sloppy cutting and pasting of separate stories, geography class flunk outs, New Mexico-ignorant editors, or maybe even an obscure news mill far removed from the region mindlessly churning out stories and stereotypes.

Indeed, the geographically erroneous piece has deeper, subliminal connotations. Bones in the desert, murder and body dumping.  All the elements, of course, of yet another border story, minus perhaps the border wall.

How much exposure do violent border stories get in comparison to say, in-depth reports about the layers of interrelationships pervading U.S. and Mexico sister border cities, joint environmental restoration efforts along the Colorado River, and the outpouring of community solidarity with migrants on both sides of the border?

In the case of Brandi Fernandez’s remains, the AP story was reprinted or broadcast by U.S. News & World Report,  the Seattle Post-Intelligencer, a couple of  Albuquerque media outlets and others. It appears Las Cruces public media outfit KRWG initially posted the story then yanked it.

Until now, and to their credit, I haven’t seen any media organizations in El Paso or Juarez falling for the AP’s murky Malaga mistake. The story remained on an AP website for New Mexico news uncorrected, during the weekend of May 22-23.

Unfortunately, strange feats of map changing and even country jumping aren’t confined to the Associated Press. A friend pointed out to me a recent story run by Newsweek and msn.com about yes, the border wall. In this instance it was about migrants and the private wall built by Trump supporters in 2019 in Sunland Park, New Mexico, which neighbors El Paso.

Now, for those that don’t know, Sunland Park is truly a place situated on the U.S.-Mexico border.

But a sentence in the story reads, “(Sunland Park Fire Chief Medrano) also said that most migrants seen coming through Sunland Park and the El Paso area are not from Mexico but from Central American countries like Guatemala, Ecuador, Honduras and Brazil.” Hmmm. The last time I looked at the map Ecuador and Brazil were located squarely in South America.

Regardless of whether it was Medrano or the writer and/or editor of the story who moved Ecuador and Brazil north, the above statement begs another simple point. In the bigger scheme of things, what in the world ever happened to proofreaders?