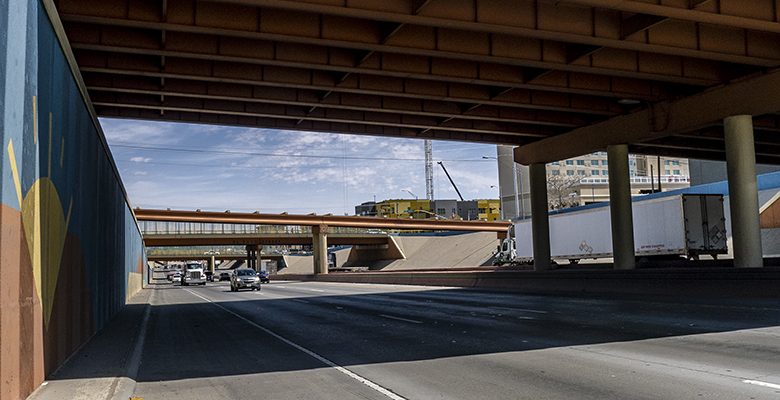 Did you see this op-ed in the El Paso Times by Sito Negron?

You may have heard about the I-10 Trench project proposed by the Texas Department of Transportation. Part of the Reimagine I-10 study series, this piece in and around Downtown might be the largest transportation project ever in El Paso, at a cost of more than $1 billion. The project proposes to:

• Widen the “Trench” (the sunken portion of Interstate 10 that passes through Downtown), replace the surface, and create adjacent access roads, which will require taking property, some historic, between Yandell Drive and I-10.

• Reconfigure the on- and off-ramps to Downtown and widen the I-10 approaches to the Trench, starting from the east around the Spaghetti Bowl and west around Executive Center Boulevard.

• Remove the bridges that connect to the community north of Downtown, and replace them with two larger bridges.

• Reconfigure the streets — such as Mesa, Kansas, Oregon and others — that connect the community north of I-10 to Downtown and its adjacent neighborhoods.

The project would rival and perhaps exceed the Border West Expressway in scope, complexity and impact. Reconstruction of I-10 from Dallas Street to Executive will clog I-10 traffic for years, change the face of Downtown, and alter how the city — especially neighborhoods of the urban core, from Mission Hills to Kern Place to Rio Grande to Five Points — connects to Downtown.

This presents an opportunity. If the Trench is covered, it becomes a tunnel. The top, or cap, becomes usable space that reconnects Downtown to the neighborhoods north of it. Elsewhere, such as in Dallas, the cap is a park. The catch is, it has to be paid for locally, at a cost of hundreds of millions of dollars.

Hundreds of millions of dollars and hours of aggravation and lost productivity as we wait in long lines of traffic.

This project also contemplates removal, which is concerning. We want to restore urban fabric, not further rend it. But the proposal calls for taking two apartment buildings, at least one of which is historic — the iconic Pearl Apartments, with the Sunset Heights mural adding vibrancy and color for thousands of travelers daily; the Holocaust Museum; and the rest of the row of properties along Yandell adjacent to the Trench.

The project contemplates taking the whole southside of Yandell through downtown, including the sports fields at St. Clement’s school, and turning Yandell into a freeway access road.

And for what, exactly?

El Paso’s population has pretty much flatlined since 2012. The numbers used in TXDot’s traffic studies were all compiled in 2012, back when the city had a pulse.

And there are other reasons to think that we’re getting ready for a party that’s not going to happen.

Smart self-driving cars and trucks will be able to communicate with each other, and anticipate the need to slow down. That will reduce the distance necessary between vehicles, and the need for new highways.

Those guys at TXDot are experts at building roads. That’s their job. They’re not going to talk themselves out of work, and budget, by suggesting maybe we don’t need another highway.

If you’re only tool is a hammer, then every problem is going to look like a nail.

The future is dynamic and a billion bucks is a billion bucks. We are already expanding El Paso’s highway capacity with the Go 10 project. Once the money is allocated for widening the trench and capping the freeway, there’s no dodging that bullet. We’re stuck with it, like it or not.