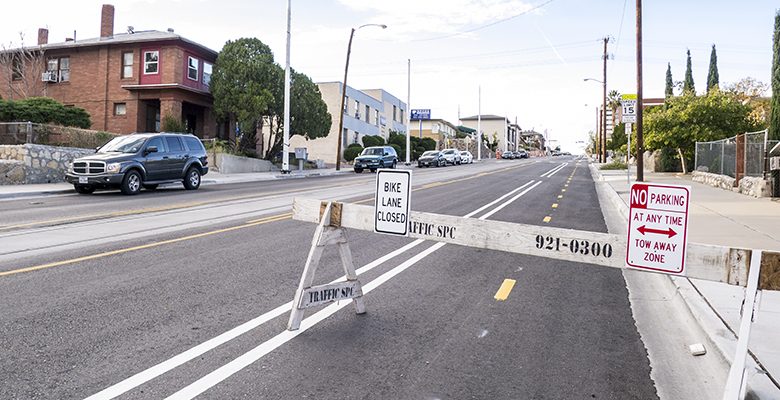 Among the people who led the campaign to bring back the trolleys, [executive director of the Camino Real Regional Mobility Authority Raymond L.] Telles said, were former city council members Steve Ortega and Ted Houghton.

Ortega said the idea for the streetcars’ return to El Paso dates back to at least 2011 when city representatives were looking for new ways to incorporate the city’s history into its current day appeal.

“We had put together a presentation on El Paso’s history for the new city council members,” he said.

The presentation was created with the help of Nestor Valencia, who had worked as Director of Planning for the City of El Paso.

The first step was to think about where the new streetcars would be able to go first, should they return to the city. One of the destinations would cover the Downtown area to accommodate the future ballpark, the Arts and Museum districts, as well as cultural, historic and government buildings. Another area would stretch towards UTEP and its nearby hospitals.

The cost was estimated at about $100 million. Houghton was exceptionally instrumental in the financing, acquiring funding from the Texas Department of Transportation.

“Houghton really pulled through, and the following year he secured the $100 million,” Ortega said. “If there is any one person who really deserved credit for the street cars, it is Ted Houghton.”

The streetcar project has involved several government agencies, at the state, regional and city level. The project uses funding from the Texas Department of Transportation, the Camino Real Regional Mobility Department is managing the construction and the City of El Paso will maintain the routes.

Ortega said others who deserve credit in their support and efforts to see the street cars return to the area have included council members at the time such as Cortney Niland, former City Manager Joyce Wilson, and Telles.

But aren’t they leaving someone out?

There’s this story, from Fast Company:

[El Paso District 1 City Representative Peter] Svarzbein, one of the major advocates of the streetcars, convinced the Texas Dept. of Transportation to earmark $97 million for phase one, and next year, refurbished vintage streetcars will connect the newly revitalized downtown to the city’s university district.

Rep. Svarzbein is conspicuously absent from the El Paso Scene story. Is it a case of jealousy and resentment between politicos, or is Mr. Ortega helping Rep. Svarzbein distance himself from the project?

Because that trolley project is going to be a mixed blessing, at best, for Rep. Svarzbein’s constituents. Stanton Street will be choked down to one lane each direction, and the latest information indicates that left turns will be illegal on many streets on the trolley’s route. Past Schuster, all the residents on the trolleys route are eligible voters in District 1.

Will they be thinking of Rep. Svarzbein when they’re crawling through three cycles of red light on their daily commute?

Or do you think they’ll blame Ted Houghton?

I think that Mr. Ortega really believes that the trolley will be an unqualified success. Rep. Svarzbein is probably being more cautious. The paper probably called him first, and he declined their interview.

Success has a thousand fathers. Failure is an orphan.

Let’s see how this kid grows up.