Here’s the lede from one story:

What began as a routine elevator problem in the Toltec Building Downtown now appears likely to involve its owner, William D. “Billy” Abraham, in an investigation of perjury, forgery, witness tampering and obstruction.

And I didn’t even know he was running for mayor! Click here.

So far, the city has spent $15 million on the downtown arena project, including $12.8 million to acquire properties, according to one exhibit in the city’s lawsuit to sweep aside legal obstacles and validate the bond project.

Doesn’t it strike you as irresponsible for the City to spend $15 million before the controversial bond was validated?

A two-day hearing in Austin is set to begin Monday in Travis County’s 201st District Court, and KVIA Channel 7 plans to livestream the proceeding on its website if the judge and parties in the case agree.

For the city, a rejection of the arena plan by the judge would be disastrous, given the bond money it has already spent. The city filed the suit under a state law that allows cities to seek a quick validation of bond projects in a single court hearing.

At issue in the case is whether the city properly advised voters before the $473 million quality of life bond election in 2012 about its plans for the most expensive project on the table — a $180 million Multipurpose Cultural and Performing Arts Center, often referred to as an arena.

Max Grossman, the former vice chair of the El Paso County Historical Commission and an intervenor in the case, is represented by three attorneys. They maintain that voters in 2012 weren’t told and didn’t know they were voting for an arena that would largely serve as a sports venue.

The city disagrees, and has introduced affidavits from former city manager Joyce Wilson and others who contend that voters understood the arena was for “entertainment” that could and probably would include sports.

Months before the [2012 Quality of Life bond] election, the attorney general’s office asked if the city could certify that the arena could be “primarily” used for cultural enrichment events such as the performing arts.

Grossman quotes the city bond counsel Paul Braden’s email response at the time, which seemed to contradict the city’s plans after the election:

“For the foreseeable future, the city sees very few sporting events being held at the multipurpose facility and city staff believes that performing arts/entertainment events will be the primary events being held there,” the city email read.

But Wilson herself argued that “voters understood” the city intended the facility to be used primarily for basketball. 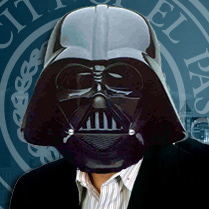 Now let’s see. The only current City Council member who was in office when the bond passed was District 5 Representative Dr. Michiel “Darth” Noe. From last week’s El Paso Inc., “It was never to my knowledge, ever put together as a basketball arena,” said the city’s new mayor pro-tem, Dr. Michiel Noe.”

Hmm. Smells like somebody stepped in doodoo. Either everyone knew, or it was never, to Dr. Noe’s knowledge, put together like that.

I’ve lost count of the number of times that the City has lied to us. The $25 million we’ll make by locating the arena by the Civic Center. The City’s conversations with Union Pacific about locating the arena at the railyards. How the HOT tax will pay for the ballpark. That the QOL projects will require no tax increase. And that’s just off the top of my head. They’re shameless. Sinverguenzas.

I’m afraid that if anyone in City Government even said the word “Integrity” that they’d burst into flames. Do you think our new City Council will be outraged if more falsehoods surface in this week’s court hearing? Or will they just say, “Oh, well.”?

Our newest City Representatives could go a long way towards restoring trust in City Government by standing up to the liars who have had their way for too long.

But don’t hold your breath.