While visiting the Fort Hancock Port of Entry I discover that the border fence that runs on either side of the Fort Hancock bridge is different from the screen that cuts through El Paso/Juarez. It has thick vertical rhombus shaped bars and looks like it shouldn’t be there, so I decide to drive east to where it isn’t.

Four miles along Highway 20, near McNary, it stops. Seeing the end of the fence with open desert beyond compels me to go look at the Rio Grande and Mexico, unobscured by a steel barrier. The levee betrays recent flooding with dense foliage and brush you have to weave through to set eyes on the river. To see the Mexican levee you have to stand on top of a truck.

Once we could drive, my friends and I would spend weekends swimming and playing Frisbee in the river. Cars and trucks parked all along the levee with people grilling and music playing. We usually went to the Upper Valley but there were times we went to the Lower Valley and when another group would show up and toss the Frisbee with us, nobody cared what side of the river anyone was from.

A border Patrol agent drives up and we begin talking. We look at the Mexican valley and he stretches his arm south and says “Starting here,” his arm sweeps east “all that way, they kicked everybody out.” “They?” I ask. “The drug gangs. There were two towns over there. They went into the houses and made everybody leave. They went to the ranches and farms and took the houses.” He points southeast. “On the paved road they have their own checkpoint with guys holding guns,” he positions his arms like he’s holding an automatic rifle. “If they know you have property they might let you through but someone they don’t know, like you, drive up…they’ll take your truck…or…” his voice trails off. 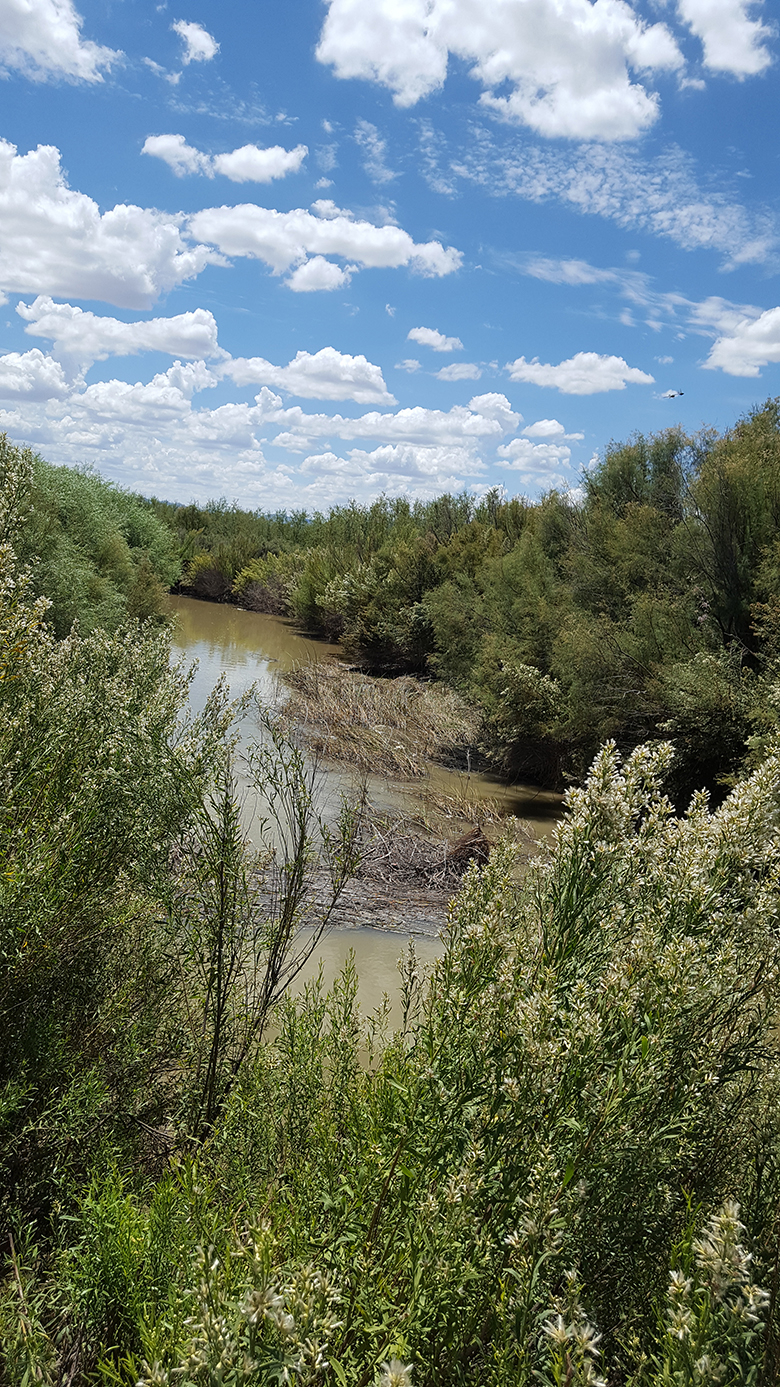 Three silver and black Mexican law enforcement trucks speed by less than a hundred yards away, visible through a small clearing in the brush and his radio crackles. “When those guys are moving, we know something’s up” he says, then refers back to the gangs “They burn houses.” As if on cue, a wisp of smoke rises about a mile south and quickly starts pouring black. “They go looking for people and if they’re not home, they burn their house down. It’s all the time.”

We used to go to Juarez after El Paso bars closed at 2 a.m. and wouldn’t leave until it was daylight. We would match wits with street urchins trying to play us and beat cops trying to jack us and refuel with “dog tacos” on the street or sandwiches at Fred’s. The city was our church and the night its savior. Juarez was the sweet soul sister who made us feel we belonged and special because we shared the secret that there was no cooler place to be on Earth.

Standing at the fence’s edge, looking at the landscape without the fence, then with the fence, I think of Robert Frost’s poem, “Mending Wall.” Every spring, he and his neighbor would meet to repair the wall that divided their properties, walking with the wall between them and placing back the rocks that had fallen during the winter, until;

“There where it is we do not need the wall:
He is all pine and I am apple orchard.
My apple trees will never get across
And eat the cones under his pines, I tell him
He only says, ‘Good fences make good neighbors.’”

And I think: El Paso and Juarez were good neighbors without a fence.

Miles from densely populated areas the fence feels intrusive, invasive. A landscape that beckons freedom does not love a wall. And whether it’s freedom from oppression and poverty or freedom from the clamor and rush of society, the desert beckons freedom. Gently, though. No sweep of pine scented wind through trees or crash of the surf with salt spray. It is a warm, quiet, subtle persuasion.

“Before I built a wall I’d ask to know
What I was walling in or walling out
And to whom I was like to give offense.”

Prior to the fence being built in El Paso, while driving the Border Highway it was common to see a group of men run across the highway near Fonseca or Midway and disappear into neighborhoods or jump into backyards and I had the distinct feeling they were after something more valuable than pine cones. Their plundered booty would be in Mexico by nightfall. I also recall driving down Paisano near Asarco and hopping over the curb to avoid the huge rocks put in the road by Mexican bandits waiting to rob motorists who stopped and got out of their cars to move the rocks. I don’t see that happen anymore and the people of those neighborhoods may be thinking the fence made Mexico a better neighbor.

“Something there is that doesn’t love a wall
That wants it down.’ I could say ‘Elves’ to him,”

For decades, Nogales, Arizona and Nogales, Mexico have been divided by a wall made of old military portable landing strip sections placed upright in the ground. While working at the Nogales Port of Entry, I watched illegal immigrants cross by lying on the roofs or standing on the couplers of train cars. Several times a day a gate would open and as the train crossed from Mexico to America and Border Patrol agents walked alongside inspecting the train, the covert riders would bail off and start running. People looking for a better life with no intention of going back to Mexico if they could avoid it. The agents would catch a few and send them back to try again the next day, the rest made it into the U.S. There were just too many to stop. And it happened all day, every day.

“But it’s not elves exactly,”

As I watch the smoke begin to wane, I wish those displaced by the drug gangs could come here and find peace and safety.

“and I’d rather He said it for himself.”

Wall or no wall, coyote or smuggler, Border Patrol or National Guard, no matter what, all day, every day, people will risk everything to reach America for a better life. And most deserve it.

And the president should know that.

“But it’s not elves exactly, and I’d rather
He said it for himself.”

And the president should know that.