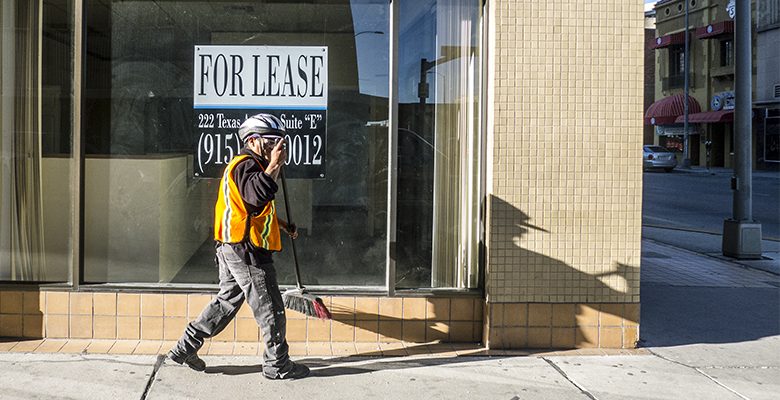 This story originally appeared on 7 August 2017.

Good news, sports fans. The El Paso economy is growing, according to this story in the El Paso Inc.

“As far as construction goes, you couldn’t ask for anything better,” [Adam Pacheco, the El Paso Director of Associated General Contractors,] said, describing the projects underway half way through 2017. “This is pretty much what contractors look for.”

By far, the majority of work is publicly financed — the city quality of life bond projects, highway construction and a new building at Texas Tech’s Paul L. Foster School of Medicine to name a few projects.

But, Pacheco said, there’s nothing wrong with that because private investment comes right behind it.

“It goes hand in hand,” he said. “You build a new school, and homes go up around it.”

Right. But where, pray tell, do the people who are going to live in those houses come from? If they move to El Paso drawn by the growing economy, that’s one thing. But if they’re just moving from Sunset Heights to the fringe, that’s not real economic development, except, maybe, for the contractors and developers.

Let’s talk economics. To simplify to the point where we can have an intelligent discussion about it, let’s pretend El Paso is an economic island. You get an injection of outside money, like, from highway construction or a new building at Texas Tech’s Paul L. Foster School of Medicine, and that’s good. The money flows into the local economy, and the construction workers go to restaurants and bars, and shop at our farmer’s markets where they buy locally sourced fruits and vegetables, and maybe they buy new cars made at our local car factory, (because, remember, we’re pretending that El Paso is an economic island), and all that outside money grows our economy as it circulates.

But those Quality of Life projects are different fish all together. That’s not new money in the local economy. That’s just taking money out of the taxpayers’ pockets and giving it to the contractors. Now the contractors are spending the money that the taxpayers would have spent. In short, no net gain for the economy.

But that’s not all. El Paso is not an economic island. El Paso doesn’t, for instance, have a local car factory. So that if the contractors buy new cars, that money leaks out of the local economy, in what economists call, in an uncharacteristic example of plain speaking, “leakages.”

Now here’s the bad part. You might think that El Paso benefits from the leakages of other economies, like that money someone is investing in highway projects or new buildings at Texas Tech’s Paul L. Foster School of Medicine. And you’d be right. El Paso’s economy is growing precisely because we’ve got those outside funds coming in. But what else? We’re not selling cars to Californians, or blue jeans to the British. Not much. The best we can hope for is more infusions from government or semi-government institutions, like Texas Tech. That’s no way to build a healthy, vibrant, sustainable economy.

And have you ever been to a job site in El Paso? At job sites in El Paso, the lingua franca is usually Spanish, and a lot of the workers are native Mexicans. A lot of that construction money crosses the bridge every payday, which represents a leakage for the El Paso economy, and an infusion for the Juarez economy. I’m not being judgemental, I’m just explaining the facts on the ground. That Quality of Life bond money is coming out of your pocket, and boosting our sister city’s economy.

And let’s not even mention the opportunity costs of devoting so many tax dollars to the Quality of Life bond projects. Let’s not talk about what other worthwhile projects we could have spent that money on. Like education, or high-speed internet access, or infrastructure, like fixing potholes. Let’s not talk about our soaring property tax rates, which make any kind of capital investment prohibitive. Let’s not talk about that at all. I’m not even going to mention it.

But at least the contractors are benefiting. And the developers. And the real estate speculators. And our political class. Maybe they’ll wave to us as they drive by in their new cars.