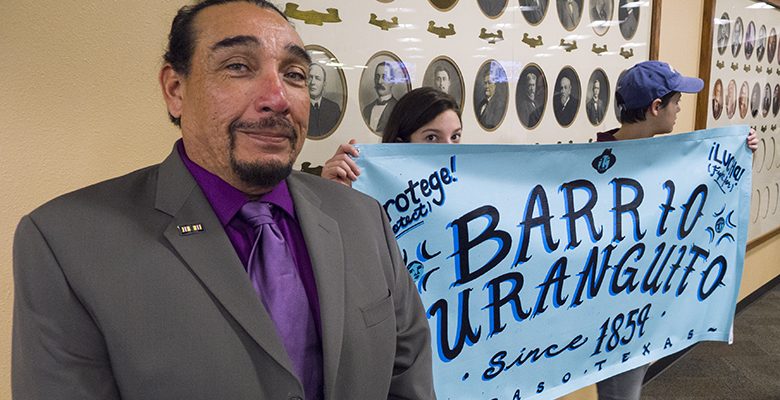 Via the El Paso History Alliance:

Yesterday, a small group of wealthy individuals who own a sports team that plays at a taxpayer-funded venue went public with their plans to buy a marketing campaign in favor of putting an arena in historic Duranguito. This was the first platted neighborhood in the city, which until recently was a vibrant community with a number of historic buildings. Despite pressure from the City, some residents remain, in hopes of rebuilding. They have received support from all corners of El Paso, and thousands of voters have signed petitions calling for the neighborhood to be protected. We, as elected officials at the City, County and State levels, have also been vocal about our support for Duranguito and the need to preserve the historical assets in the area.

Yet with dismissive arrogance, this small group tries to minimize the opposition to historic demolition, and the support for good government. They also try to argue that the legal challenges to the plan are bought by outside influences. For one thing, this ignores the work of the entire legal team, which includes local public interest lawyers representing residents. And in yet another irony, they ignore the fact that a key arena consultant was an out-of-town sporting venue salesman, whose advice included promoting sports venues as multipurpose facilities in bond elections in order to deflect public antipathy about funding sports venues for wealthy investors.

Further, it is sad that it takes someone from out of town to appreciate the rich history of Duranguito, which local investors should be fighting to protect as a long term value that adds to the economic development mix.

We are in full support of the civic focus on Downtown El Paso, which is the core of our community. We have supported many of the developments now taking place. What we do not support, and what thousands of El Paso voters and people from all over the community have joined in opposing, is the lack of transparency, public process, and respect for history and people that the City has shown throughout the arena debate.

Remember, this started with City staff, not elected city officials, announcing an arena location on a Thursday, providing very little information even on the day of the City Council meeting to vote on the location, during which there was overwhelming public opposition, and not being truthful about what it knew regarding the historic nature of the neighborhood. Things have not gotten better since then, as the City has spent millions on the legal battle, and on consultants.

The announcement yesterday represents the last ditch effort of Downtown investors to make the public pay for their sports venue and destroy an irreplaceable piece of our community’s history. We look forward to working with them on more productive ways to move El Paso forward when the effort fails and the City finally turns in a different direction.