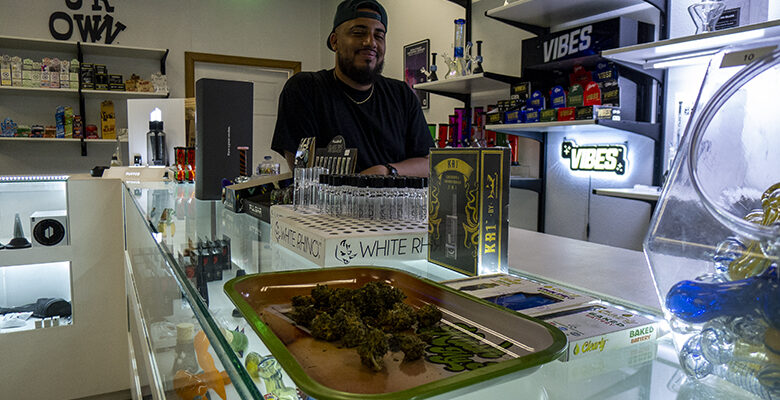 Well, it’s finally come to pass. Denizens of the Land of Enchantment – and their neighbors – can now stroll into a store and legally purchase a small amount of marijuana for recreational purposes. In celebration of the April 1 legalization, The Paper, an Albuquerque media outlet active in promoting legal cannabis, emblazoned the front cover of its print edition with three- leaf combo and a celestial hand holding four buds accompanied with the greeting, “Hello, Mary Jane.”

Commenting on the proximity of marijuana friendly New Mexico to pot paranoid Texas, a writer for The Paper stumbled in assessing the market of Lone Star imbibers just waiting to cross the state line. The Paper is co-owned and published by Pat Davis, who also sits on the Albuquerque city council.

In the publication’s March 30 edition, the columnist noted that the “City of El Paso-less than 20 miles from the New Mexico border has a population of around 0.6 million people.” Huh? First of all, as people familiar with the Paso del Norte metroplex might well know, El Paso and the small New Mexican city of Sunland Park where legal cannabis outlets eagerly await your Texas dollars, are joined at the hip and even indistinguishable by boundary in places.

For the record, a July 2021 U.S. Census estimate of El Paso County tags the population at 867, 947. This means a significantly higher number of paseños may fatten New Mexico’s tax coffers than The Paper’s columnist indicates.

Regarding the Paso del Norte’s new VIP status in New Mexico’s economy, the writer fails to include Ciudad Juárez. Burgeoning with about 1.5 million inhabitants and growing, Juaritos teems as the launch pad for a consumer segment out for a cross-border and legal high. What’s more, if envisioned marijuana lounges in places like Albuquerque materialize, the Land of Enchantment will add another tourist magnet to its existing battery of Native casinos and ski resorts, the latter of which may face increasingly tough times in the mega-drought of the 21st century. But remember, like Las Vegas, Nevada, what happens in New Mexico stays in New Mexico.

Needless to say, cannabis growers, commercial dispensers and New Mexico state officials are peachy keen to have El Paso and Juárez as neighbors. Flashing back to the good/bad old days when marijuana consumed in New Mexico likely first passed through Juárez and El Paso as contraband, it tickles the ribs to see how history can turn on its head.

The Paper’s Mary Jane cover issue contained a travel piece touching on the northern rim of the Paso del Norte, the area in and around Las Cruces where wonder weed can now be duly purchased. No more need here for soiled bills passed between filthy fingers and Gollum-like glances, thank you.

Yet the travel article contained statements which the homeboys and homegirls might find curious. For example, we read that jaguars are occasional visitors to the mountains of Doña Ana County outside the City of Cannabis, oops, City of Crosses. Jaguars?

Unless the writer has inside information he wishes to not disclose at this time about recent jaguar forays into them thar rugged hills, he must be confusing Doña Ana County mountains with southwestern New Mexico’s Bootheel country and the outback of adjoining southeastern Arizona where, in fact, several male jaguars have been spotted and/or photographed since the 1990s. Besides possible poachers, border wall construction now presents an obstacle to any big cat with a Doña Ana daydream on his mind.

The Paper article further states that Mesilla Valley is “home to forests of cottonwood and almond orchards.” Cottonwoods do in fact grow along the Rio Grande but in diminished, surviving clusters in the engineered aftermath of the Rio Grande Project of the early 20th century that dammed and channeled and detoured the river into a skinny ribbon of its former, lush self.

Ranking high among the glory crops of New Mexico farming, pecan nuts, mainly grown for export to China and other outside markets, ringed up more than one billion dollars in income for statewide producers during the 10-year-period from 2010-19, the two agencies report.

If the first three days of legal recreational marijuana sales in New Mexico mark the trend, marijuana will easily cream pecans as a money maker. In this case, the earnings will derive from a domestic as opposed to a foreign market. According to the New Mexico Cannabis Control Division, a little more than $3.5 million in “adult” or recreational sales were registered during the April 1-3 weekend. Las Cruces and little Sunland Park (estimated population 17,000) were among the top five New Mexican cities in recreational sales. Behind Albuquerque and Santa Fe, Cruces came in number three with $309,218 for the THC till, while Sunland Park ranked number five with $149,554.75 in cash receipts.

One can feel the echoes of Texas radio and the big beat in southern New Mexico cannabis dispensaries. It must be mentioned that both Las Cruces and Sunland Park are south of the U.S. Border Patrol’s 1-25 checkpoint, where anyone crossing with otherwise legal amounts of marijuana in New Mexico could encounter trouble because of federal prohibition, as the Border Patrol was quick to remind in the days surrounding the April 1 recreational sales roll-out.