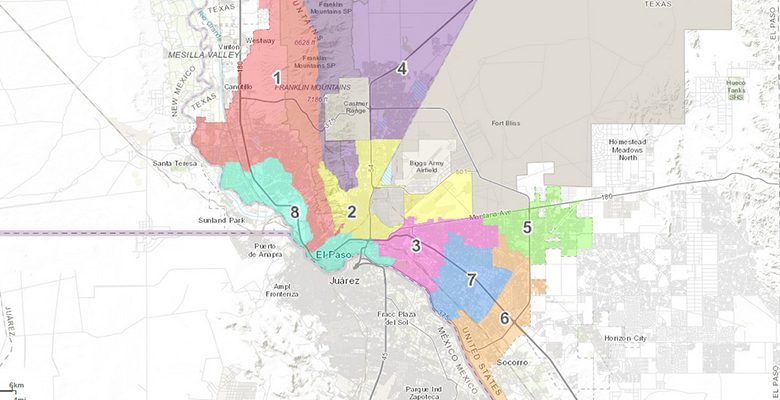 Here’s a link to the City of El Paso’s map of the City’s Representative districts.

It’s a hash. One can only wonder what the people who allocated the districts were thinking.

Who do you think the District 8 Representative represents?

Look at District 4. Precinct 60, that neighborhood up there off of Zion, is separated from the rest of the district by Fort Bliss, and linked to District 4 by a narrow strip of land that runs along the ridge of the Franklin Mountains.

I’ve been along the ridge. Nobody lives there.

I’m not going to say it’s racist, but I don’t mind calling it classist. These gerrymandered districts effectively rob the people south of the freeway, the people who live in neighborhoods that are among the poorest in the nation, of a voice on City Council.

City representatives are going to pander to their constituents that vote, and who contribute to their campaigns.

This year is a redistricting year. Every ten years, after the census, the City is charged with re-drawing the district boundaries. According to the City Charter:

On or before September 1 next following the publication of the results of each decennial United States census, each Representative shall nominate one qualified voter from his or her district and the Mayor shall nominate one qualified voter from the City at large. Upon approval by the Council, these nominees shall comprise the Districting Commission. . . . The Commission shall make recommendations to the Council concerning adjustments of the boundaries of the Representative districts. Upon receiving the Commission’s recommendations, the Council shall review the population of each district, and as soon as possible, shall change the boundaries thereof as necessary to insure substantial equality in the populations of the districts.

I’m thinking that the incumbent City Reps will fight to keep their districts mostly unchanged. The system has worked for them so far. But half of the City Representatives will have termed out by the time of the next election for their seats. They’ve got no dog in the fight.