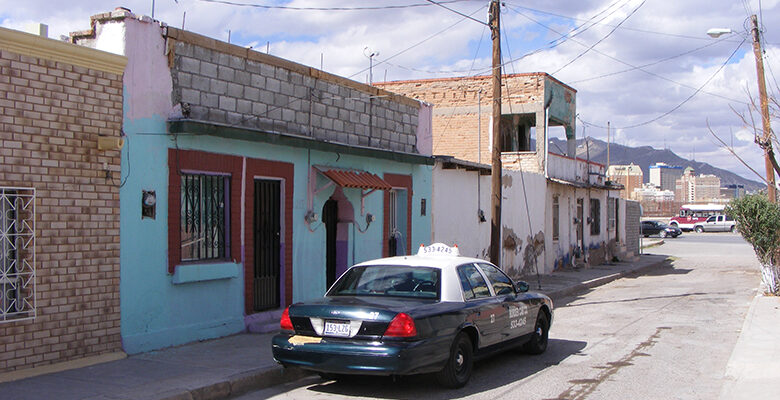 This isn’t my first blog. If you’d asked me yesterday, I would have said it is, but today I stumbled across an older blog. It was called El Ojo del Chuco.

Here’s a post I lifted from it today. The post dates back to July, 2009, at close to the worst of the violent times in Juarez.

Yesterday I went to Juarez.

The air was thick with humidity from the recent rains, and the temperature threatened the triple digits. I parked my car by the new Aoy and crossed the Stanton Street bridge on foot.

The soldiers at the the revision table weren’t interested in my backpack. As I approached they were finishing up an inspection of a grocery trolley trucked by an old woman. I gave them a tight smile and dropped eye contact.

I jumped the pipe barrier and cut across the parking lot, skirting the cement canopy where the official aduana inspections take place. Past that the army was conducting more revisions of vehicular traffic. I counted three Heckler and Koch G-3’s, and one rifle I didn’t recognize. It wasn’t the new FX-05. One soldier was texting on his cellphone.

I cut up through the belly of the neighborhood, west of Lerdo till I hit Mejia, and then I crossed Lerdo, passed the school that Juan Gabriel used to sponsor, then south again. People on the sidewalk talked to me.

At Diez y seis I stopped to get my bearings. Sidewalk traffic was thin on the sunny side of the street.

I turned left, east, towards the old tourist market, two blocks before I found the liquor store. The old man behind the counter reached over and slid back the bolt to let the door swing open.

I found the bottle I was looking for where I had seen it, on a bottom shelf, next to some forgotten mescals.

Have you been back to Cuahtemoc?

The younger man asked me. He sat on a metal chair across from the counter.

Do you know that area well?

A little. I know the Sierra better. Creel. Batopilas. Guachochi.

A friend went to Coyamito. But it was the dry weekend.

The state stopped liquor sales for the election weekend. So his friend couldn’t get me the Sotol Coyamito I had requested. It was salesman’s bullshit. In a curious way, it showed that he cared enough to lie to me.

I put the liter of Sotol in my backpack, and walked back out into the sun, and headed west on Diez y seis to Juarez Avenue.

The transit cops on bicycles were taking license plates from the cars illegally parked in front of an ATM. A truck with Texas plates slowly pulled away just as one of the officers clamped his needle nose pliers around a bolt.

I headed north on Juarez, back towards the bridge, and turned left through an open air mall where stalls offered tourist schlock. Half the stalls were vacant. None of the vendors tried to pitch me.

The other end of the mall hit Mariscal just south of Mejia. The burrito kiosks were busy. Their clientele usually includes the flotsam of life, the homeless and junkies and transvestite prostitutes. A man with a face smudged almost as dark as his tangled mat of hair and his heavy winter coat stared at me from the stand closest to the corner. I turned north.

The Mariscal is vacant lots and rubble. Walls stand roofless, shells full of trash, tropical murals painted on partitions that no longer define inside or outside.

The horseshoes are gone from the Plaza Mariachi, next to the place that used to be the relatively reputable Fausto’s, across from the vacant lot where the Hawaiiano used to stand.

But across the street the metal shutters were up above the doors at the Arbolito.

The keyboard was set up for Monday night’s version of live music karaoke. A couple of regulars sat at the end of the bar, one drinking beer and the other tequila. Javier shined the professor’s shoes. I shook hands with everybody and sat at a bar stool.

I stopped Sergio from getting me a beer and a shot and I ordered a cuba. Mexican cokes taste better, and I wasn’t done for the day yet. I’ve got deadlines stacked on deadlines. I thought I could use the caffeine and sugar.

Sergio is a third generation Juarez bar owner. His son Cheko bartends on Friday nights. Soon, when progress tramples the Arbolito, Sergio will move to a new location. Two weeks ago he said maybe two months.

The old men at the end of the bar were talking about the old days, the way old men do in bars in the afternoon.

The killed him, one said.

He was a mafioso.

Mafioso is from a new taxonomy. If he was a mafioso, he never knew it. He may have been a contrabandista, or involved in organized crime, but he wasn’t a mafioso, as far as he knew.

The conversation moved to old bars, at old addresses, and do you remember.

I finished my cuba, and ordered another. These are the old days, I thought. We just don’t know it yet.