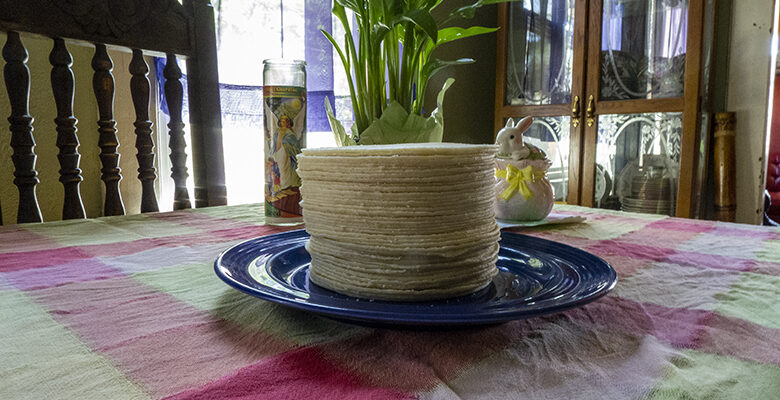 El Pasoans eat a lot of tortillas. I’ve had seven today and it’s not even two o’clock yet.

Tacos. Burritos. Enchiladas. Chilaquiles. Rancheros. They’ve all got tortillas. Rumor has it that some people even eat their menudo with a flour tortilla.

Sacrilege, for sure. God meant menudo to be eaten with a sliced francesito toasted on the griddle, preferably in the early, early morning, under fluorescent tubes, with a neon in the window.

I googled up “tortilleria” and the internet listed 17 on this side of the border. That’s not counting the clandestinas, someone’s abuela slapping out some tortillas by hand to peddle in the neighborhood, or the tortillerias that haven’t make the leap to the 21st century yet. And there are restaurants that make their own tortillas for their patrons, without selling tortillas out the door.

Lots of the tortillerias have their own niche market. La Rotativa makes corn tortillas, mostly for restaurants. La Primera, out there in Sunland Park, has the grocery store business mostly sewn up. La Colonial is really a burrito store masquerading as a tortilla factory.

There are tortillas of every persuasion. Thick and thin. Smooth and coarse. Corn and flour.

Here’s an interesting piece from HumanitiesKansas.org that, besides giving an history of the tortilla, offers this nugget:

According to the Tortilla Industry Association (TIA), the fastest growing sector of the baking business
is tortilla manufacturing. U.S. annual sales of tortillas exceeds all other ethnic and special bread
sales, including bagels, croissants, muffins, and pita bread. and are overtaking white sandwich
bread as the nation’s preferred food delivery platform

The Tortilla Industry Association. Who knew?

And, just like salsa replaced ketchup as the nation’s preferred condiment, the tortilla is supplanting white bread.

The reconquista is real and it’s happening in our kitchens.

While we’re on the subject, let me plug the Tortilleria Guadalajara, on Montana just east of Copia. They have great flour tortillas.

Of course, so do lots of other tortillerias in El Paso.