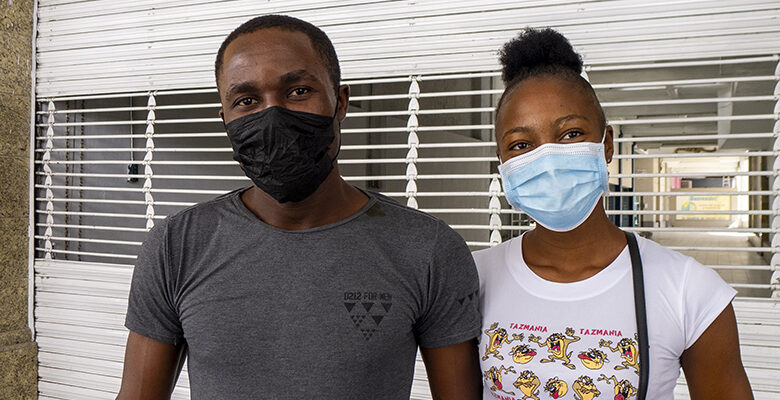 With his wife and small child seated nearby, Noel mused about the family’s round-about journey to the United States. Resting in downtown Ciudad Juárez less than a mile from the U.S. border, Noel spoke in fluent Spanish about leaving his native country of Haiti, studying computer science in Chile, embarking on a multi-country trip through the vast expanse of South America, navigating the natural and manmade jungles of Central America, and finally daring the twisting, risky roads of Mexico.

A quick memory rolling off his tongue was of the police, especially the official guardians of law and order in Central America.

“The police took our money, and if you have the bad luck of coming across a patrol they’ll take your money,” Noel warned. At the time of the interview, Noel’s family had been in Mexico almost a year and Ciudad Juárez for two weeks, searching for a place to live and seeking a legal way into the United States, possibly via political asylum, where he has long-established relatives. According to the young migrant, the Caribbean island nation of an estimated 11.5 million residents is immersed in political and criminal violence; a family home was burned down by arsonists with differing political opinions.

“We hope the (pro-migrant) organizations pay attention to us,” Noel said.

Indeed, recent news accounts depict recurring and escalating instances of hyperviolence in Haiti. Citing a United Nations report, a story in a July edition of the Mexican daily La Jornada reported 471 dead, wounded and disappeared persons just between July 8 and 17 in Cite Soleil, the poorest district of the capital city of Port-au-Prince.

Added to the toll were reports of gang rapes against women and girls as well as child recruitment by gangs. Additionally, three thousand people-including hundreds of unaccompanied minors-fled their homes, according to La Jornada and reports by Haiti’s National Network for the Defense of Human Rights and Human Rights Watch.

“I don’t see a future for Haiti, considering the level of insecurity that exists,” Noel weighed in. “We need to have security. It is hard to speak about the future of Haiti when there are so many delinquent gangs which kill for pleasure.”

Haitian unrest continued into August when protests erupted against economic conditions, crime and interim Prime Minister Ariel Harvey, resulting in at least three persons killed and four injured, according to the Haitian Times.

While political instability (including repeated U.S. military interventions and coups such the overthrows of President Jean Bertrand Aristide in 1991 and 2004), economic austerity regimes and refugee exoduses are nothing new for the Caribbean island nation, violence has worsened in recent years, illustrated in part by last year’s assassination of President Jovenel Moïse, who was supposedly guarded but murdered in his own his own home.

Nonetheless, more than 19,000 people were deported to Haiti the first half of this year, mainly from the United States, according to Human Rights Watch. The number was more than three times the figure for the comparable period of 2021, the advocacy group said in a statement.

“Returns to Haiti are life-threatening and will continue to be so if country conditions do not improve,” said Cesar Muñoz, senior Americas researcher for Human Rights Watch. “The United States and other governments should stop all repatriations and help set up a reintegration program to provide assistance and protection to those already repatriated.”

The current wave of Haitian migration traces back to the 2010 earthquake that killed more than 200,000 people and left hundreds of thousands more displaced. Many refugees found jobs and temporary homes in South America, including Brazil where work was abundant in preparation of the Olympic games. Many Haitians now have children who were born in the diaspora.

When economic crises struck South America, Haitians began trekking north, typically on foot and through the deadly Darien jungle corridor of Panama, inching their way to the Promised Land of the U.S., where many have relatives and friends.

By 2016, Tijuana was the first place in northern Mexico where Haitians set down in large numbers as they attempted to gain U.S. political asylum. Since then, far greater numbers have been cooped up for long periods of time in the southern Mexican border city of Tapachula or stranded along the northern border in Ciudad Juárez and other places across from Texas, awaiting an opportunity to enter the U.S.

According to U.S. Customs and Border Protection (CBP) data recently reported in El Diario de Juarez, only 12 Haitians were detained in the CBP’s El Paso sector, which includes New Mexico and a swath of west Texas during fiscal year 2020 (October 1, 2019-September 30, 2020), a time marked by the COVID-19 pandemic. In Fiscal Year 2021, 4,378 Haitians were detained in the sector.

For decades, Haitian dreams of a better life in the U.S. have been frequently stymied by restrictionist immigration measures, including the Title 42 pandemic rule and Remain in Mexico, which pressured Mexico to effectively corral migrants and refugees before they could cross the U.S. border.

“Title 42 expulsions stand in stark contrast to the actions the Biden administration has taken to grant exemptions to the application of Title 42 for the (primarily white) people fleeing from Ukraine,” stated Human Rights Watch and the American Civil Liberties Union in an August 2022 report.

A former executive director of the local Roman Catholic Church’s now defunct social justice ministry, labor rights attorney and activist Elizabeth Flores has witnessed the migrant and refugee waves from multiple nations ebb and flow over the years in Ciudad Juárez, an inflow and outflow she predicted is not likely to vanish anytime soon.

“Mobility is obvious from the places where there is unemployment and crime is high,” Flores said. “Of course the people leave, and they will continue coming.”

Besides economy and violence, climate and the environment form ever bigger parts of the push-pull dynamic forcing Haitians and other people from ecologically hammered countries from their homelands. Apart from the ongoing catastrophe of deforestation, from 2004 to 2021 Haiti was hit with four major tropical storms, three hurricanes, two earthquakes, and a cholera outbreak linked to UN “peacekeeping” troops.

In 2017, Via Campesina, the international grassroots movement representing millions of small farmers and farmworkers from across the globe, held a meeting in Ciudad Juárez which, among other matters, sounded the planetary alarm.

“Climate change has many consequences,” warned Juslene Tyresias, Haitian representative for Via Campesina. “There is a lot of drought, agricultural production has gone down. Hurricanes have caused much damage, and there are many victims…”

Five years later, black Haitians are increasingly familiar faces in Ciudad Juárez and other Mexican cities. Conversations dancing with Spanish, French, Haitian Creole and even English add a new twist to the daily border lingo. And if a Haitian has lived in Brazil, Portuguese is also likely somewhere in the linguistic mix.

In Ciudad Juárez, Haitians eke by in migrant shelters, hotels and crowded rentals- if they can find space. Housing is especially tight in the city’s downtown, where rents have increased. Limited assistance in obtaining Mexican work papers and other documents, job placement and medical services is offered by government agencies.

Money sent by relatives in the U.S is a life-line for some, while others make ends meet by working in restaurants, selling items on the street like the native Mexicans or even landing an assembly line gig in the maquiladoras, the hundreds of foreign-owned, export-oriented factories that employ more than 300,000 workers in Ciudad Juárez and are currently soliciting upwards of 25,000 more employees for jobs. Many locals reject maquiladora work because of the low pay and grueling hours.

Enjoying a reputation for industriousness and a strong work ethic, the Haitians are not among the street beggars roaming downtown Ciudad Juárez.

In light of the proximity of Haiti to Miami and Florida, where many Haitians flee, Noel was asked if he saw any irony in the long and dangerous detour through a good part of the Americas he and tens of thousands of other Haitians have traveled in their odyssey. Nodding his head, he flashed a knowing smile, adding that reality had crossed his mind.

While Noel assessed his treatment in Mexico and Ciudad Juárez as positive, other Haitians interviewed separately differed.

On one recent day, a group of two women and several men, preferring anonymity, spoke about their trials and tribulations, their voices expressing anger and disappointment and their eyes flashing sadness and frustration.

The Haitians denounced incidences of racist comments and treatment, robberies, police harassment and violent attacks suffered since they arrived in Ciudad Juárez about four months ago. One man complained about paying approximately $250 per week for a small room infested with bed bugs and vermin in a notorious, crime-ridden neighborhood.

Like others in the burgeoning Haitian diaspora, some described the foot-worn trail extending from South America to the U.S.-Mexico border. “All walking, all walking” intoned the two women. Currently bereft of Mexican work permits and decent lodgings, the men and women, all in the prime of their lives, summed up their daily predicament as confronting no work, no housing, no money, and no food.

Although the group claimed a months-long presence in Ciudad Juárez, the interviewees said they were still struggling to figure out a way to legally enter the U.S., but had had no contact with migrant service providers and advocates who might be able to help. Calls to a non-profit El Paso refugee advocacy organization were unreturned, a woman complained. “We need to enter the U.S. because Mexico is dangerous,” said another Haitian. “We need an opportunity.”

As the Haitians vented on a late summer hot day, throngs of shoppers and sightseers surged past them. It was the sixth anniversary of the late singer Juan Gabriel’s death, and over on Avenida Juárez a pair of artists hoisted up on a crane touched up the giant portrait of the Divo of Juárez painted on the side of a tall building while songs of the Mexican icon drifted from a taqueria.

A festive mood was evident in a city where only days earlier business as usual was ground to halt by a rash of penitentiary murders, the firebombings of convenience stores, street shootouts, and the closure of terrorized businesses.

Whether in Haiti or Ciudad Juárez, that movie is well known to migrants and refugees who’ve met a seemingly endless cast of villains and vultures as they’ve tumbled through traumatic life twists in a world of whirling turbulence.

Meanwhile, the often dry Rio Grande and adjoining canal flanking Ciudad Ciudad Juárez actually streamed water after welcome summer monsoon rains. A burst of life for the surrounding desert, the water delivered death August 22 to a five-year-old Guatemalan girl identified in the international press as Margaret Sofía García who slipped from her mothers’ embrace and drowned as the mother and daughter desperately attempted to cross the river into U.S.

Far downstream, where the Rio Grande runs even faster, Mexican and U.S. authorities recovered a dozen or so more bodies from the Rio Grande as the season of death rolled on. In a weekly newsletter, the migrant advocacy Hope Border Institute of El Paso headlined comments on the river deaths as “Drowning in Search of a Dream.” Despite the dangers, one thing is certain: the people will keep coming, as Elizabeth Flores said.

Ciudad Juárez, for many Haitians and other migrants from the South a city of hope and despair, a city of myriad contradictions and mortal restrictions, summer of 2022.