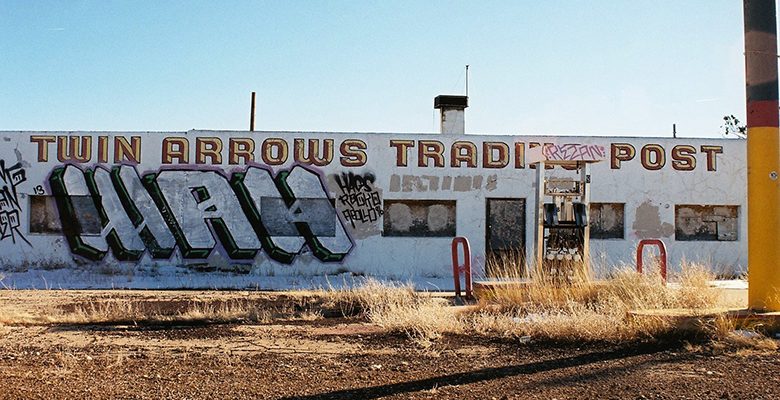 A couple of years ago I wrote about Two Guns, Arizona, an old Route 66 trading post with a history of violence and tragedy dating back to when the Navajo and Apache fought in what is now known as Canyon Diablo. Twin Arrows, christened in homage to Two Guns and just a few miles to the west down I-40, hasn’t got quite as bloody a background, but that doesn’t mean what remains isn’t fit for City of Dust. Surely I haven’t become that macabre, have I?

Originally known as Canyon Padre Trading Post and likely built sometime after 1946 (it’s absent from that year’s comprehensive A Guide Book to Highway 66 by Jack Rittenhouse), the roadside stop was named for a nearby gorge. Canyon Padre Trading Post then seems to have remained relatively obscure until its name was changed to Twin Arrows Trading Post and two very tall wooden arrows complete with tips and feathers were installed in the parking lot to guide travelers to the right place.

While one could argue that death and sorrow did more damage to Two Guns than the destruction of Route 66 by I-40, it was the interstate that began to put the nails in Twin Arrows coffin in the 1970’s, even though the trading post was given its own exit. The gas station, diner, and gift shop advertising itself as the “Best Little Stop on I-40” (perhaps once the “Best Little Stop on Route 66”?) was apparently sold and re-sold until 1995, when the towel was finally thrown-in. The state of Arizona then became the owner and probably wasn’t too pleased about it, either. The gas station, diner, and arrows began to deteriorate in the harsh northern AZ desert.

The ruination of the dining car, in particular, is a shame because it’s a Valentine Diner. These were prefabricated restaurants designed and built by Arthur Valentine out of Wichita, Kansas and sold from the late 1930’s to the late 1960’s. Valentine started out as an owner and operator of pre-fab lunchrooms in the early 1930’s and this got him thinking about a more transportable version.

Some of Valentine’s first dining cars were made before the end of the ‘30’s, but he didn’t really get his operation going until material shortages eased after WWII. He then began offering an 8-10 seat restaurant that could be bought from a catalog for $5000 and paid off in monthly installments of $40. Arriving virtually complete with grill, tables, and stools, it was said the Valentine Diner could be set on a concrete slab and made operational in mere hours. I guess those were the days of realistic American entrepreneurship. I’ve heard rumors of them before. The photo below shows that grill, tables, and stools are all gone now.

Arthur Valentine died in 1954 and his company was sold to the Radcliff family who continued on for just over a decade, ceasing operation in August 1968. While most of Valentine’s creations have certainly ended up on the scrap heap by now there are still some surviving Valentine Diners around the country. Six can be found along Route 66, although I don’t believe any are open. One from Winslow, AZ was taken to Oregon but I’m unsure of its present status. Albuquerque’s has been turned into a police substation on Central Avenue. Magdalena’s was moved from west-central NM, up to Edgewood and onto a sleepy stretch of old Route 66, an interesting turn of events. It may still be in the process of being restored.

The Twin Arrows Trading Post and its Valentine Diner are not doing well behind a wall of concrete Jersey Barriers. Twin Arrows fate (i.e., prolonged decay) had long seemed assured as absolutely nothing happened at exit 219 for nearly fifteen years. But, in 2009, the arrows were spruced up by the Hopi tribe. Then, almost exactly one year ago, the Twin Arrows Navajo Casino Resort opened across I-40 to the north. The Navajo Nation owns the sprawling monster and its massive parking lot. In 2013, the casino built a huge digital billboard. The Hopi’s arrows weren’t doing the trick, it seems.

Is additional restoration in the cards then? I wouldn’t bet on it. More might’ve been planned, but some kind of impasse apparently developed between Arizona and the Navajo Nation and the Twin Arrows Casino isn’t off to a very profitable start now anyway. I’ve read that the Hopi Tribe have purchased more land on the south side of I-40 and the Navajo Nation are said to be considering doing the same. So, the site may eventually be bought and become…who knows? In the meantime, you can see for yourself how things have turned out at the old Twin Arrows Trading Post. Arthur Valentine wouldn’t be impressed.


Weird Arizona by Wesley Treat contains much of the basic background on Twin Arrows. If you want to dive into the history of Valentine Diners, the Kansas Historical Society provides a lot of info, as does Legends of America. The Flagstaff Business News mentions Valentine Diners in Arizona and Twin Arrows, specifically. Want more photos? Ghostownaz has some good ones.