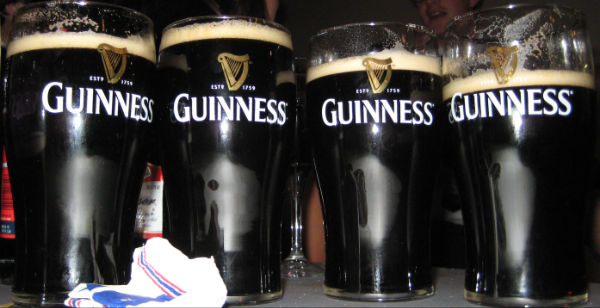 “It’s best to keep America just like that, always in the background, a sort of picture post card which you look at in a weak moment. Like that, you can imagine it’s always there waiting for you, unchanged, unspoiled, a big patriotic open space with cows and sheep and tenderhearted men ready to bugger everything in sight, man, woman or beast. It doesn’t exist, America. It’s a name you give to an abstract idea . . . .”

In 2008, I watched the returns from the presidential election at a swank party at the Guinness Factory in Dublin, hosted in the wee hours by the U.S. Ambassador to Ireland. The Irish were aglow from their dark quaff and Obamaphilia; the embassy staff being somewhat less enthusiastic as they were Bush nominees. There were plenty of locals lauding O’Bama as a reincarnation of JFK. I had actually been grilled by Irish immigration about Sarah Palin on my entrance into the country, since my place of birth on my passport is Alaska, USA.

My brother has now lived in Ireland for eight years; having just signed a five-year contract he will be there for the foreseeable future. Prior to that, he lived in Berlin. We at times have differing political viewpoints, but we both are actively engaged in U.S. politics, we both vote, and we both love our country. We are also both distinct from our parents’ and grandparents’ generation in that we don’t believe in the myth of American exceptionalism.

Our family did not arrive at their view of American exceptionalism because they are provincial. My grandfather fought in World War II, lost a brother in Japan, traversed the world by boat, and lived in Spain many years later. My parents circumnavigated the globe in the days of more glamorous air travel, when you could pick a hemisphere to visit on PanAm, and they later lived in Venezuela. We grew up in a family that was patriotic yet also well-informed about the wider world and its conflicts.

As a student of International Relations, I sought to compare the economic and political health of different nations. I studied how every great empire cultivated narratives that show the uniqueness of their dominion, and justified it culturally or religiously. I also concluded that America has behaved in a typical realist fashion – acting in its interests. It has been an expansionist nation. It has used Manifest Destiny and its exceptionalist narrative to perpetrate atrocities against its native peoples. Any cursory knowledge of Latin American history would clearly explain why Mexico and other nations to the south view the United States with trepidation. Living in El Paso, formerly part of Mexico, we have a unique perspective on both the benefits and costs of life in America. Many comfortably traverse the two worlds, languages, nationalities, and cultures. We witness firsthand the irrationality of our border policy drafted by people with little understanding of the border.

You do not have to believe in the superiority of your country over others to love your country. The globalization of information and ease of travel has ushered in an era of unprecedented migration. The nation state and the passport is a vestige from the prior century. Certain libertarians advocate a complete breakdown of the restriction on movement, so that ideally any person could travel to any nation and stay as long as they want. Imagine a competition of best practices between nation states. The persecuted, the refugees, the poor would not be held hostage by the oppression of bad governments.

The values that make America great are shared by other nations. They are the ideas that we inherited from the Enlightenment, principles of liberty, equality and brotherhood. There is also no doubt that America’s notion of democracy has positively influenced many newer countries throughout the world; many of the rights enshrined in our founding documents have been copied almost verbatim. America has also experienced great luck due to a bounty of natural resources, navigable rivers, and plentiful immigrants who worked hard to make a better life for their families. I am thankful to America for the opportunities I have been provided, and I am thankful to the generations that came before me for their struggles.

Four years later, we are in the midst of another presidential election, Obama and the presumptive Republican nominee Romney have both been charged with minimizing America’s greatness, even politely suggesting that other nations feel similarly about their place in the world. Rather than view this as a symptom of American decline, we should see this as a positive trend towards greater tolerance. An ultimate celebration of humanism would coincide with a decline of nationalism in any form. I remain more comfortable with these candidates who eschew Reagan’s and others’ belief that there is a divine plan in our political actions; in other words that God is on our side.

I look at my son today, and I want him to be a citizen of the world. I want him to feel at home on various continents, have friends and family who speak different languages and who live in far-flung corners. It could be that America still provides the best opportunity for him, but I want him to be able to live anywhere or stay in his home town, so long as he is happy. I want him to live a life that is exceptional, which one can do in any nation.