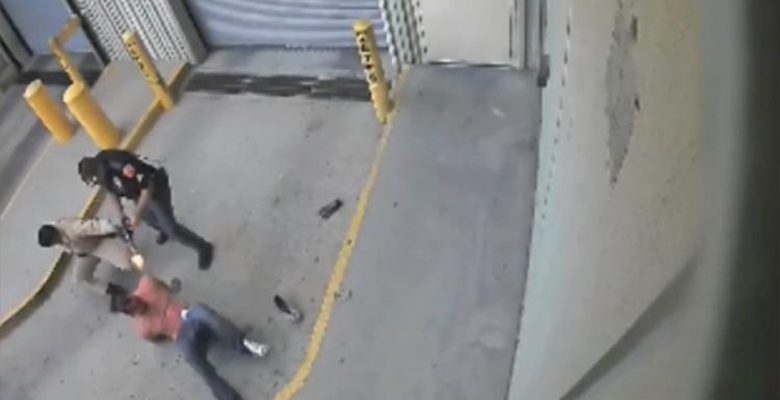 Today Officer Flores is serving a ten year sentence in the Texas Department of Corrections Facility in Huntsville.

Nah. Just kidding. He’s back on the force, keeping El Paso safe from the depredations of other handcuffed prisoners.

Jaime Exparza, the El Paso County District Attorney at the time, notoriously coddling to law enforcement and elected officials, failed to secure even a charge of Reckless Endangerment against Officer Flores. DA Exparza couldn’t even get the Grand Jury to return a charge of Illegal Discharge of a Firearm in the City Limits.

Officer Flores was represented in the Grand Jury proceedings by CLEAT, the Combined Law Enforcement Association of Texas. They are the law enforcement unions’ legal mouthpiece. Union dues pay for CLEAT attorneys.

Since Officer Flores wasn’t convicted of any crime, he was allowed to return to the El Paso Police Department after CLEAT appealed his dismissal.

(Wearing a badge in El Paso is a license to kill. Remember that the next time you see those flashing lights in your rearview mirror.)

Despite the fact that the video of Officer Flores shooting Mr. Saenz garnered national attention and was widely condemned, the citizens of El Paso were not outraged. The Chief Executive Officer for the political subdivision responsible for the El Paso County Jail, County Judge Veronica Escobar, gave no public statement. The County Commissioners Court was also silent. County Sheriff Richard Wiles didn’t say a word.

The elected officials who are putatively responsible for the El Paso Police Department, the El Paso City Council, expressed no opinion regarding the cold blooded execution of a handcuffed prisoner at the hands of and while in the custody of an El Paso Police Officer. In fact, seven of the eight El Paso City Representatives voted against awarding the family of Mr. Saenz any monetary compensation.

None of the local media editorialized on the execution of a handcuffed prisoner in the custody of the El Paso Police Department at the El Paso County Jail. Well, we did. But not El Paso’s English language daily.