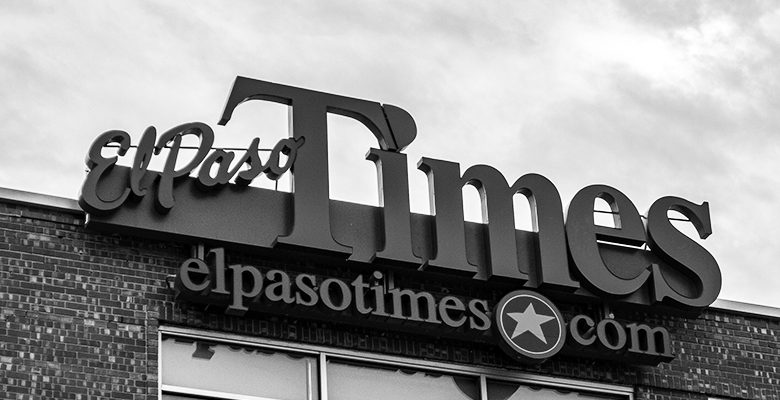 MNG Enterprises Inc., the owner of the Boston Herald and Denver Post that’s backed by hedge fund Alden Global Capital, on Monday disclosed a 7.5 percent stake in Gannett and made an unsolicited offer to acquire it. MNG, better known as Digital First Media, is offering $12 a share, or about $1.6 billion including debt. In a statement, Gannett said it would carefully review the proposal.

Gannett bought the Times in 1972. In 2003, Gannett and MediaNews Group formed a partnership between the Times and MediaNews’ New Mexico papers, with Gannett as the managing partner. In December 2005, Gannett became a minority partner in the El Paso Times, handing the majority of the partnership and management to Denver-based MediaNews. In 2015, Gannett acquired full ownership of the Texas-New Mexico Newspapers Partnership from MediaNews successor Digital First Media. Later that year, Gannett split into two, with one having broadcasting and digital properties (Tegna) and another with newspapers (the new Gannett). The latter retained the Times.

From a different Bloomberg article:

In 2007, [“vulture investor” Randall] Smith started Alden Global Capital LLC, installing [Heath] Freeman as president. The firm and its president have since become notorious as a destroyer of newspapers. In 2010, Alden Global acquired out of bankruptcy MediaNews Group Inc., the newspaper empire William Dean Singleton had built, which included such prominent regional papers as the Denver Post, the Salt Lake City Tribune and the St. Paul Pioneer Press. According to its website, the company, now named Digital First Media, has grown to 97 newspapers.

It is no secret that the newspaper business is in decline. So it’s hardly surprising that Freeman would feel the need to shrink the head count at his newspapers, just as almost every other newspaper owner has had to do for years.

But what sets Freeman apart is that he seems to have a rather unique view of a newspaper’s purpose. In this view, his papers are intended not so much to inform the public or hold officialdom to account, but to supply cash for Freeman to use elsewhere. His layoffs aren’t just painful. They are savage.

It’s no secret that the El Paso Times, like every other newspaper, has been hurt by the internet. A couple of weeks ago, the Times laid off/bought out two longtime writers and two photographers. I have suggested that their editorial independence has been compromised by the influence of advertisers, notably the City of El Paso.

If Digital First Media acquires Gannett, it will probably be bad news for the El Paso Times.

It’s hard to see this ending in any way but an eventual sale of Gannett, whether to Digital First or another buyer. Unfortunately, that will likely mean a bevy of job cuts.