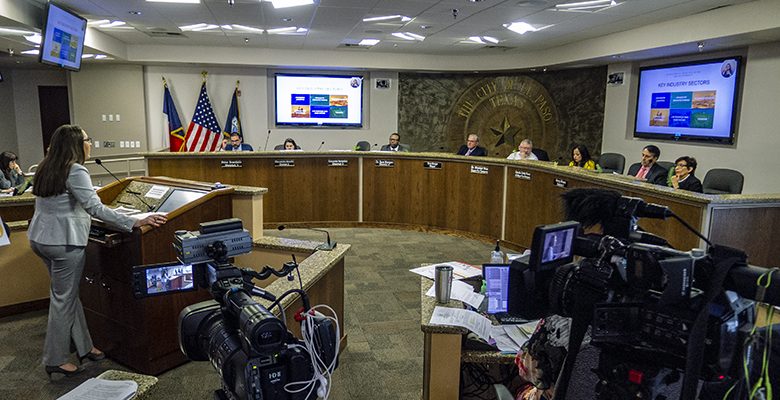 Today, City Council decided to give the farm to Great Wolf Resorts, in the form of swathes of land, obscene tax incentives, and $40 million cash.

One has to wonder why they’d do that. There was a clue the City Manager hinted at.

“I told you that you would have to make bold decisions, and people would object, but, in the end, four or five years from now, the results will begin to show,” he told City Council after the vote.

I’m paraphrasing because I wasn’t recording, but that was the gist of it.

Of course, we’re fifteen or twenty years into this experiment, and all we have to show for it is crippling taxes.

The problem is that City Manager Tommy Gonzalez is slicker than owl shit. You have to be to hold down a $300,000 (plus) a year job managing a bureaucracy, balancing the demands of the ruling class, dysfunctional elected officials, and a peasant uprising.

And he gets to sell City Council snake oil one on one, backed by a compliant, under-qualified staff who owe him their job. Truth is not one of their considerations.

Today, for instance, Economic and Development Director Jessica Herrera told Council that the $40 million (cash) that the City is guaranteeing to Great Wolf won’t come from taxes, because it will come from the Development Fund instead of the General Fund.

Do you care which pocket the City pulls your money from?

Sure, maybe it comes from fees instead of property taxes, but it’s not like the City is selling anything. It’s not creating wealth. Those are our monies, no matter which pocket the money comes out of.

City Council ate it up.

So now we, the taxpayers, are on the hook for $40 million. We’ve lost close to 3,000 acres that we used to own. A couple of TIRZs will eat up all the money that improvements on those properties might have generated.

And what do we get for it? A hotel water park that most of us will never use. Higher taxes. Potholes. And a big shine on from our elected officials.

Welcome to El Paso. City Council don’t need you and they expect the same.