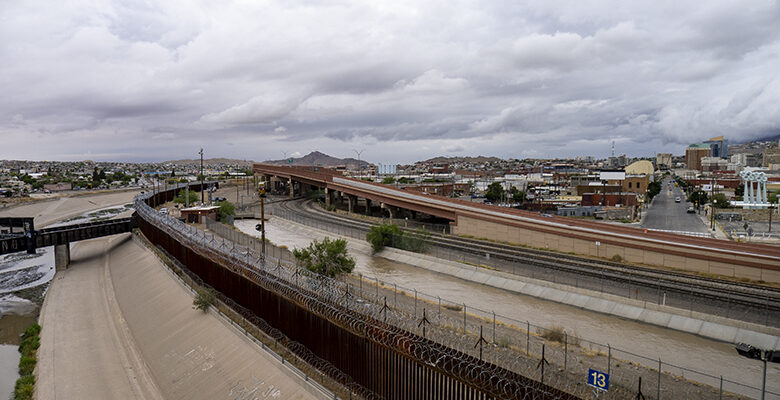 Summer Solstice should be a time for celebration. But for many desperate migrants attempting to enter the United States, it is a time of death. Soaring summer temperatures in the desert of the U.S.-Mexico borderlands, which grow hotter and hotter due to human-induced climate change, claim many lives of undocumented migrants funneled into remote crossings riddling the rugged and vast region.

For those who do successfully cross, the network of highways leading into the U.S. interior can prove fatal.

Especially during the weeks preceding summer, another deadly barrier is the Rio Grande/Rio Bravo and adjoining canals which teem with mortally swift water sent from Elephant Butte and Caballo reservoirs in New Mexico to border irrigation districts in Texas and the Juárez Valley of Mexico.

“The El Paso County Sheriff’s Office responded this morning at approximately 9:20 a.m. to a call reporting a body in a canal near the area of Luis Guerra and Petunia in San Elizario, Texas..”

The same day, El Paso County deputies were once again active in San Elizario to investigate the discovery of yet another “unidentified body,” in a canal, informed a new KTSM posting on June 20.

According to the El Paso Times, at least 10 people drowned in El Paso-area canals in the two week period prior to June 19.

If The Big River gives life, it also delivers death.

South of the Paso del Norte, the Big River claims even more lives on its journey to the Gulf of Mexico.

In a June 12 press release, Mexico’s National Migration Institute (INM) disclosed that its Grupo Beta had located the bodies of 37 migrants so far this year in the northern Mexican states of Tamaulipas, Coahuila, Baja California and the southern state of Veracruz.

Of the 37 victims, 33 of them drowned in the Rio Grande in and around Piedras Negras, Ciudad Acuña and Matamoros. Four of the victims were women.

Although more than half of the victims lacked identification, authorities determined that Nicaraguans (4) Hondurans (3) Mexicans (4) were among the dead. Other identified victims included one person each from Guatemala, Peru, Venezuela, and Cuba.

Migrant drownings in the Rio Grande are nothing new, but the trend is clear.

“In Tamaulipas state (Mexico), an official with the Nuevo Laredo Fire Department reported recent, record numbers of drownings in the Rio Grande that flows by his city. Gil Armando Arroyo, chief of the fire department’s water rescue division, said 24 people have perished in the Rio Grande since the beginning of the year….in comparison to this year’s mid-year toll, 23 people drowned in the nearby river during all of 2004…”

In July 2008, FNS reported that Mexico’s Ministry of Foreign Affairs (SRE) had tallied the deaths of 2,956 Mexican migrants who died in the borderlands trying to reach the United States since 2001. The leading causes of death included dehydration (1062), drowning (583) and vehicle accidents (247).

Fourteen years later the SRE reportedly has some fresh numbers. As cited in the June 19 edition of La Jornada daily, the Mexican federal agency had now counted 6,480 Mexican migrants who perished while attempting to cross the border from 2004 to 2021, with Arizona alone accounting for 3,340 of the deaths, mostly in the Tucson sector. Next in the funeral line were Texas (2,434), California (696) and New Mexico (10).

Strikingly, the SRE documented a sharp jump in the number of deaths from 272 in 2018 to 719 in 2021. Yet the latest official numbers as reported by La Jornada do not include 294 unidentified people presumed to be of Mexican nationality or count unfortunate people of other nationalities.

It’s not clear how COVID-19  and possible deaths connected to the pandemic factored into the SRE’s death determinations.

Apart from bodies which are never found, a complete accounting of migrant border crossing deaths is nearly impossible because of differing data collection and reporting practices of multiple agencies in the United States and Mexico. Last April, a U.S. General Accounting Office report found what it considered deficiencies in the U.S. Customs and Border Protection’s data collection practices.

The SRE’s 2021 figures reported by La Jornada top the 651 deaths of ill-fated border crossers reported by the International Migration Organization of the United Nation from the beginning of 2021 to December 10 of last year, once again demonstrating prevailing statistical discrepancies.

Overall, an August 2021 report from Boston University’s International Human Rights Clinic, concluded that “Since 1994, more than 10,000 people have died in their attempt to cross the US southern border,” with most deaths attributable to exposure to the elements.

“More people have died or gone missing while crossing the southwestern border of the United States than were killed in both the September 11th terrorist attacks and Hurricane Katrina combined,” the report underscored, calling 2020 the deadliest year on record at the time.

Contended the report’s authors: “International legal obligations pertaining to the missing migrant crisis are grounded in the right to life, guaranteed in several instruments to which the United States is bound, including the Universal Declaration on Human Rights and International Covenant on Civil and Political Rights.”

While stark enough, the statistics of course don’t really capture the full story. Behind every migrant death there is a family, devastated loved ones, shattered dreams, and disrupted communities. A chain of sorrow, loss and helplessness extends from the U.S.-Mexico border deep into Latin America, the Caribbean and sometimes other corners of the globe.

Who are the victims?  Of the 719 dead in 2021 mentioned in the La Jornada story, we find out that 492 were identified as males and 90 as females. Unsurprisingly, men between 28 and 45 years of age constituted the largest group of dead, though 50 boys and 8 girls, as well as 86 minors “whose gender is unknown,” were among the decedents, according to La Jornada.

Ironically, deaths could have been much higher without rescues by U.S. Border Patrol agents, which more than doubled from 5,335 in 2019 to 12,854 in 2021, the Mexican newspaper reported.

For decades, immigration experts and migrant advocates have warned of more migrant deaths from increased Border Patrol deployments, high-tech security surveillance and border wall construction undertaken by successive U.S. Democratic and Republican administrations since the 1990s, all measures which foment dangerous crossings. Instead of having open borders as some on the right claim, the U.S. might now be said to have burial borders.

The issue was addressed in some detail at a 2011 forum at Annunciation House in El Paso, which was covered by FNS.

Among the speakers at the event, Kat Rodriguez, then program director for the Arizona-based Human Rights Coalition, estimated more than 5,000 migrants had perished from different causes along the entire southern U.S. border since the mid 1990s. Cautioning that migrant border deaths are undercounted and the true toll is unknown, Rodriguez termed the situation a “human rights crisis.”

More than a decade later, that crisis has only deepened and effective actions to address its root causes are still urgently waiting.

Meanwhile, the summer of 2022 is likely to showcase even greater tragedy along the U.S.-Mexico border.