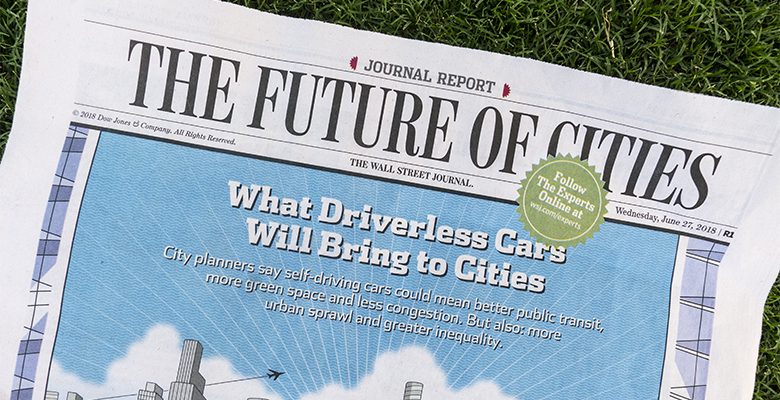 On Wednesday the Wall Street Journal came out with a section called “The Future of Cities.” The lead story was titled What Driverless Cars Will Bring to Cities.

As the arrival of driverless cars gets closer, cities are scrambling to get ready. And for good reason: The driverless car promises to reshape the urban landscape as we know it. Little wonder, then, that the potential changes are creating excitement — and fear — among city planners. As they host test fleets of robot vehicles and figure out how to rework ordinances for the autonomous future, they’re imagining what life is going to be like when the streets are filled with cars that can largely think for themselves.

(Well, not here. Here the city planners are their overlords are working to drag us back to 1950, at least according to the dream of il capo di tutti capi.)

One guaranteed impact of driverless cars will be less need for parking lots. You won’t need to leave your car close to your destination; you can send it to a distant parking lot with instructions to come back in half an hour, or at five, or when you call.

Think how many more cars we’ll be able to stick in a lot when they only need four inches (or less) between them. Think of the algorithm the AI will be implement to maximize robot car availability, to get cars into and out of tight spaces most efficiently.

Robot cars will probably get to El Paso 10 years after they’re common in every other city, because El Paso seems to be constantly 10 years behind. But the experts in the Wall Street Journal article say robot cars might drive among us next year.

Hopefully they’ll be able to retrofit all those new parking lots for another purpose.