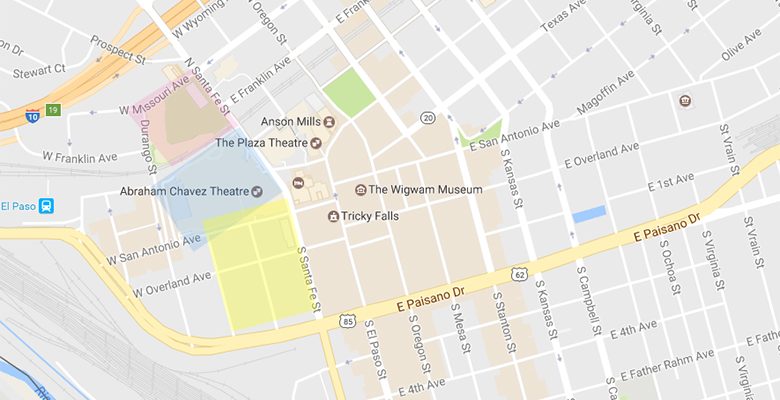 Look at that map. I’ve highlighted the ballpark, the civic center, and the proposed site for the arena.

That’s fifteen or twenty acres of downtown El Paso that aren’t going to be utilized most of the time.

The Chihuahuas only play 71 regular season games at home. There are shows fairly often at the Abraham Chavez, but how about the rest of the Civic Center? And the proposed arena? Right now we don’t have an anchor tenant. If we get a D League basketball team, that’s only 25 games a season. Plus whatever other events that can suck from the Don Haskins Center, the Coliseum, and the Pan Am Center in Las Cruces.

Our experience over the last three years has shown us that there’s not a lot of collateral activity that takes place before or after the baseball games. I would expect basketball games to generate similar results. And concerts? We can probably expect the black t-shirt crowd to pre-party, slamming Bud Lights in parking lots before the show.

My point is that we’re going to have fifteen or twenty acres of downtown El Paso that will be vacant most of the time. That once-trendy Union Plaza Entertainment District will be separated from the rest of downtown by a desolate dead zone of lifeless monoliths.

That’s what your city government is fighting for.