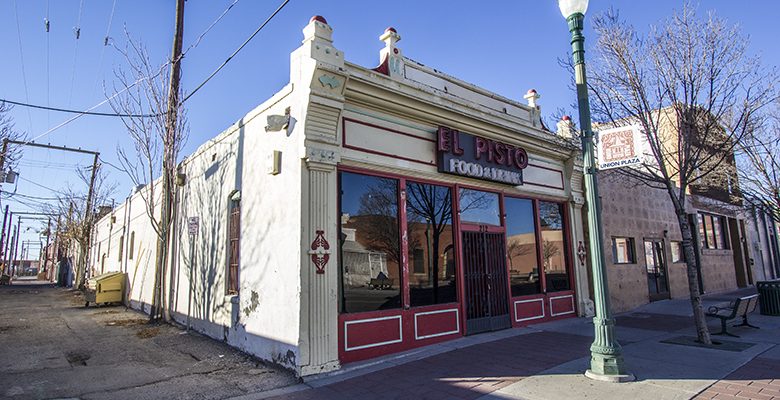 Did you see this story in this week’s El Paso Inc.?

Historic preservationists are pressing ahead with a plan to have a former Chinese laundry building in El Paso declared a registered state historical landmark. The historic building is in the Duranguito neighborhood, the area where some hope to see a $180-million arena built.

But during a meeting Friday in Austin, the Texas Historical Commission balked at approving the landmark designation for the building at 212 W. Overland, after receiving a letter of opposition from the Greater El Paso Chamber of Commerce. Most recently, the building housed El Pisto restaurant, and before that La Norteña Café.

“I cannot tell you how important it is to save that building,” Grossman said. “It alone would be reason enough not to demolish Duranguito to build an arena.”

Residents and some property owners in the area also want Duranguito saved, and the cause has found a vital ally in William D. “Billy” Abraham, the owner of more than a dozen historic buildings in Downtown, including the Chinese laundry.

“We are lucky to have the heritage of our Chinese community interwoven into the very fabric of our society,” Abraham said in a prepared statement two weeks ago. “I stand united to protect that legacy.

How bad do you have to be to make Billy Abraham look like a champion of historic preservation? That’s what the Greater El Paso Chamber of Commerce has done.

In another article in the same issue of the Inc., the Greater El Paso Chamber of Commerce has this to say:

“The issue for the chamber is was and will be our strong and unwavering support for moving forward on the arena project and its original site designation, recommended strongly by consultants that were hired for a lot of money who ultimately chose this location,” chamber president and CEO Richard Dayoub told El Paso Inc.

They could have saved a lot of money just by asking the Borderplex Alliance, nee Paso del Norte Group, where to put it. I reckon that’s what the “consultants that were hired for a lot of money who ultimately chose this location” did.

(The Paso del Norte Group rebranded itself as the Borderplex Alliance after people started spitting when the PDNG was mentioned.)

The Paso Del Norte Group, which brought El Paso the controversial Downtown Plan in 2006, is shopping for support from business leaders and public officials for a big, multi-purpose arena Downtown.

Mayor John Cook said he was recently approached by Myrna Deckert, PDNG’s former president and CEO, who said, “We need to talk soon about an arena.”

The PDNG, made up of business leaders, elected officials and other influential people, included a proposed arena in the 2006 Downtown Plan.

The city, in its updated 2015 plan for Downtown, proposes an arena complex in the Union Plaza District, south of City Hall.

And then, apparently, in 2016 they hired consultants to rubber stamp their plan, and they’re using the cost of that study to justify a decision they made in 2006.

The Greater El Paso Chamber of Commerce is in favor of anything that takes money out of taxpayers’ pockets and puts it into the pockets of El Paso’s millionaires.

The Chamber of Commerce wants to destroy El Paso’s oldest neighborhood to build another boondoggle.

When people say one thing and do the opposite, which will you believe?