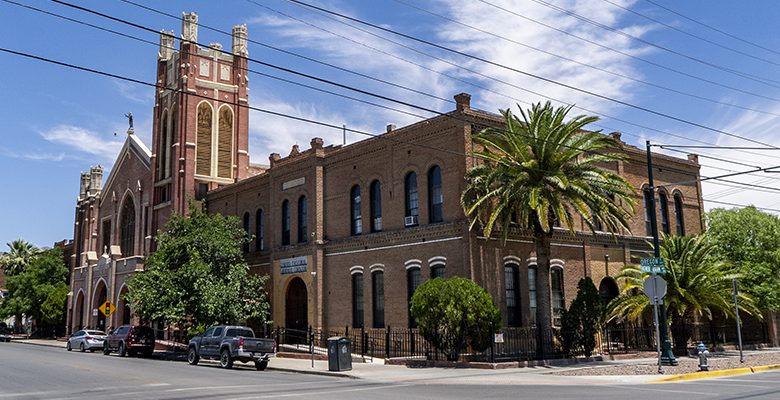 Have you seen this map of the Segundo Barrio Historic District the El Paso Commissioners Court approved last Monday?

It’s the blue boundary there.

Who knew that history jumped around that much? It’s like a Kansas tornado, jumping from one property to another.

The red boundary is the historic district recommended by the historians. But what do they know?

How about the way the carved out a big chunk of Segundo and made it part of the Downtown Historic District? What’s that all about?

Historically, and I know something about historic, because I’m old, that whole neighborhood was Segundo. In the sixties, crackers like myself wouldn’t walk down there, because that was radical Chicano territory.

But now I guess some businessmen want to claim South El Paso Street as part of downtown. Like there aren’t a lot of vacancies north of Paisano they could work with.

I reckon it’s part of the concerted effort by local businessmen, abetted by their tools in government, to minimize the Chicano aspects of our community’s history. Like cramming the Cultural Center into the library.

Some of the masterminds behind El Paso’s grand plan for the future believe that El Paso fell behind Phoenix and other cities in the Southwest because El Paso is predominately Mexican or Mexican-American, somehow ignoring the uncomfortable fact that European-Americans have dominated El Paso politics for the last century. So they’re trying to sweep our history under the rug.

The real reason El Paso fell behind Phoenix is because, in the 1950’s, when the U.S. economy was booming, Phoenix had the foresight to court American industry, notably the aerospace industry, while our local bigwigs were content to maintain the hacienda.

Somehow, the Commissioners Court felt that Sacred Heart Church, el Corazon de Segundo, didn’t deserve to be in an historic district, even though the church was founded in 1893. Across the street from Sacred Heart is the Pablo Baray Apartments, where Villista doctor Mariano Azuelo’s Los de Abajo was published. The book is the best known contemporary novel of the Mexican Revolution. Somehow, the Pablo Baray Apartments didn’t make the cut to get into an historic district, either.

The business folk have some grand plans for downtown. Let me remind you that downtown is covered by Tax Increment Reinvestment Zone Number 5, which means that any increase in property tax revenues downtown stay downtown. Not a dime of any property tax increases downtown will make it to the City’s General Fund. Your politicians and their mouthpieces can talk about all the wonderful development taking place downtown, but any benefit to El Paso’s taxpayers is a long way down the road, if there’s any benefit to El Paso taxpayers at all. Nonetheless, that’s the basket that City Government has put all our eggs in.

You’re subsidizing downtown development for the benefit of a handful of businessmen downtown. And they didn’t even kiss you.

From where I sit, here in my home office in Barrio Heights, it looks like some otherwise good businessmen bought some snake oil, and now they want us to pay for it. Some smooth talker painted them some pretty picture of downtown, and they can’t believe they got fooled. After all, they’re rich. So they must be smart.

The taxpayers of El Paso will keep suffering as long as the downtown investors have their hooks in City Council, and the County Commissioners Court. Precinct 1 Commissioner David Stout and County Judge Ricardo Samaniego voted against adopting the County’s proposed plan. They can stay. They represent the citizens of the county, and not the special interests. The rest of the County Commissioners are encouraged to seek other employment. But that’s up to you, the voter.

Vote. Vote for representation. Vote to change course. We can’t expect a better El Paso if we keep putting the same tools in office.