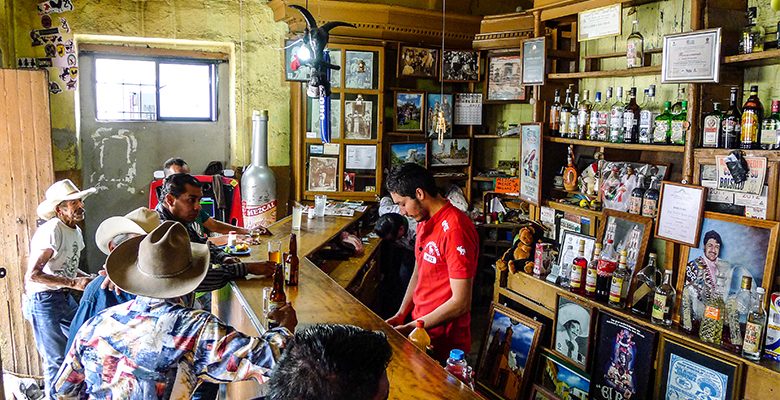 I’m standing at the bar in a 97-year-old cantina in Dolores Hidalgo, Mexico. The whole bar is about fifteen feet wide and eight feet deep, and the five or six mostly drunk drinkers meant that the only place left for me when I came in was at the end of the bar by the open urinal. Sunlight filters in above and below the swinging bar room doors, like an old west saloon, and paint peels off the slats of the 97-year-old ceiling.

The cantina is called El Incendio, and it’s around the corner of the home of the great ranchera songwriter Jose Alfredo Jimenez. Jose Alfredo wrote El Rey, among many other songs, before he died in 1972 at the age of 47 from cirrhosis of the liver. Drinking at El Incendio is like doing morphine and drinking bourbon in the backseat of Hank Williams’ Cadillac.

There are all kinds of bars. Fern bars with twelve dollar martinis patronized by girls in little black dresses and guys with fifty dollar haircuts. Sports bars with multiple teevees sucking the life and the attention out of wannabe jocks and a few girls that go for that type. Dance bars where the music is too loud for conversation so the premium is on appearance. And drinking bars.

Drinking bars, with their honest simplicity, tend to last the longest.

I like old bars. Old bars hold a history not usually told in history books. Bars have stories. In bars, lives are lived and sometimes lost right out in the open. In bars, passions are inflamed in public. I sometimes sit in an old bar and wonder how much blood and beer have been spilled across the counter, or on the dance floor, or in the street outside.

Mexico has old bars. Juarez has three bars that are approaching their centennials, a couple born in the forties, and another few from the seventies.

Sometimes the age of old bars is hard to determine. Records are incomplete. Memories are understandably hazy. You can’t carbon date an old bar, or take a core sample, or count the tree rings.

In Guanajuato, where I am right now as I write this, there are four or five or ten old bars, some of which may only date to the 1960’s. Most have swinging saloon doors and an open urinal against the far wall, but some have put walls up around the bathrooms in a concession to decency and the relatively recent admission of women.

But not all. As we stood at the bar in El Incendio, a couple of drunks shouldered their way past my wife and kids to use the urinal in the corner.