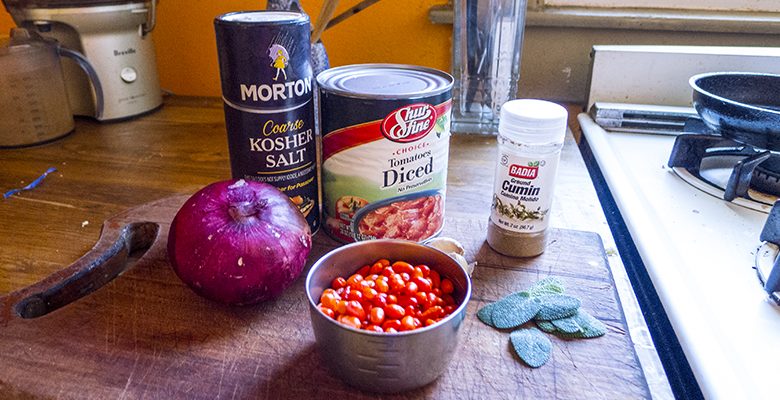 At Monarch last night the salsa brava was pretty popular.

“You should sell it,” people said.

But I’m not into cooking on an industrial scale.

That salsa brava is not mild. But that’s not why we eat salsa, is it?

Salsa is easy to make. The simplest salsas contain only one ingredient, chile, ground in a metate. Other standard ingredients include tomatoes, onions, and garlic. And you can add herbs, like cumin, or oregano. Or you can get exotic, with fruit, like mango or papaya, or even apples or apricots.

And every Mexican knows that lime juice goes with everything.

So here’s how I made the Salsa Brava last night.

I took almost a cup of chile pequin. I harvested them from one plant in my backyard that volunteered before last winter. Now it’s taller than you are, and I can currently harvest about a half a cup of chiles every day. But I don’t. I wait till I need them, so yesterday I could harvest a whole cup. 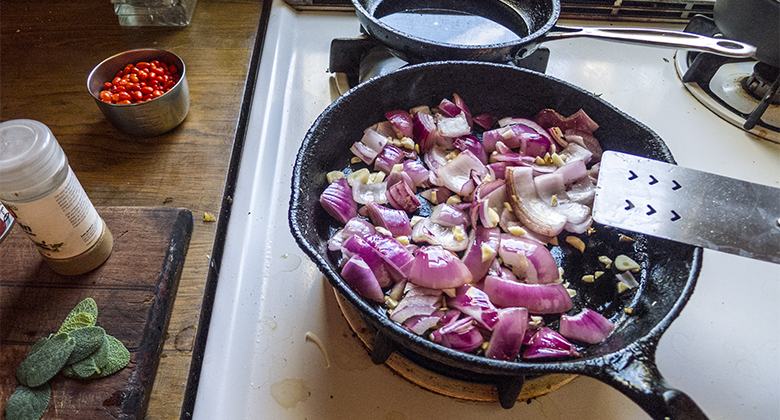 I took five cloves of garlic and sliced them, fine, and a purple onion and diced it, coarse. Then I fried them in a little olive oil in the black pan. I left them on the heat till the garlic was brown and toasted. Toasted garlic tastes different than raw garlic.

I opened a big can of diced tomatoes, and dumped half of it in the blender, and put the cooked onions and garlic in on top of them. I’m a big fan of canned tomatoes. The taste better than store-bought fresh. And remember, those store-bought, fresh, winter tomatoes are slave tomatoes. 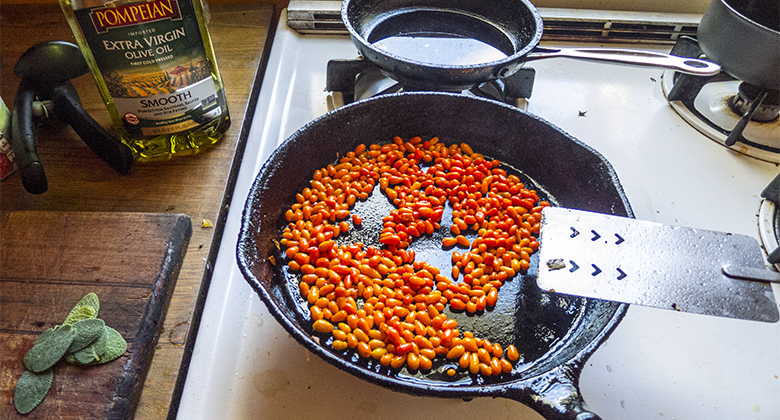 Then I poured the cup of chile pequin in the black pan. The oil spit, because I’d rinsed the pequin off in the sieve and they were still wet. I scraped them around so they got cooked on two sides, mostly, with spots like blackeyed peas. The redder chiles seemed to lose a little of their color in the pan, but that didn’t concern me.

After they were cooked, I turned the burner off and put the chiles in the blender. Then I threw in about ten fresh sage leaves freshly harvested from the backyard, a little cumin (just a little so cumin isn’t the dominant flavor), and salt.

Then I put the blender on puree for a couple of minutes.

The flavor was good, but the salsa was a little too spicy for eating alone, so I put the rest of can of tomatoes in the blender and agitated it till it was smooth. Maybe next time I’ll leave some of the tomatoes unblended, so they leave recognizable chunks.

It’s cool, even when it’s hot.