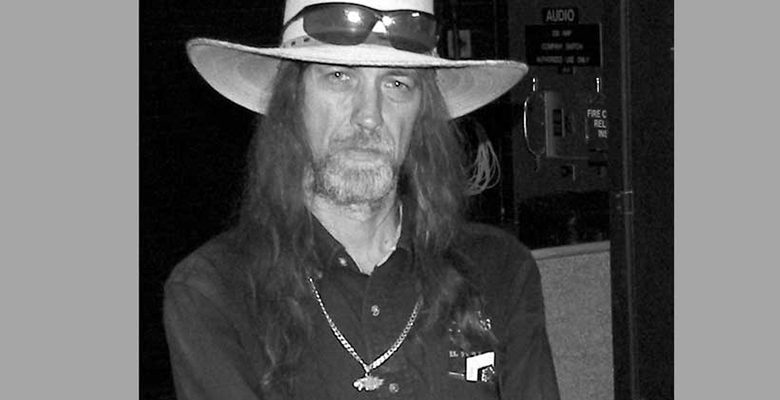 Chet first came to El Paso playing drums for Big Jack Johnson. Two months later he showed up at Wildhare’s again. I think there was a girl involved, but that didn’t last. But Chet did.

He lived in that vintage motor court between Wildhare’s and the Kings X for a while, and he divided his time between the bars, too.

When Chet lived in El Paso, he worked the call centers. A person can’t make a living in El Paso working as a blues drummer. I remember one time a friend of Chet’s got popped smoking a joint outside of Wildhare’s, and Chet needed cash to bail him out of the can. He asked me to cash a paycheck. He had four or five paychecks in his wallet, each on of them for more than a grand.

When Wildhare’s closed, and the successive owners gutted the place, Chet salvaged pieces of the mural that was behind the stage. Wildhare’s inspired that kind of loyalty, and Chet was that kind of guy.

Eventually Chet migrated to the Rocking Cigar Bar. I suspect he had some kind of a falling out with the owners of the Kings X. Chet could flex his Jersey attitude. Or maybe he just didn’t want to go outside to smoke.

I never had cross words with Chet. He was a good guy and a loyal friend.

The first news reports said that Chet was murdered at a bus stop. Later reports amended that to a Sun Metro stop. But obviously Chet was waiting for the streetcar, because the streetcar is free, and Chet was in no hurry.

Imagine having trolley service from the Cincinnati bar mall till three, but no security. No cops. No rent-a-cops. Drunks, or least people who have been drinking, waiting for the streetcar.

Despite its used car lot lights and fancy signs, shit happens in the Cincinnati Entertainment District. Chet was the second person shivved in the area in the last five weeks. How many people have been run over while crossing Mesa?

The Kern Place neighbors complain about bar patrons pissing on their lawns, and making noise as they walk to their cars. I’m no fan of the cops, but a police presence has a deterrent effect. Sometimes a deterrent effect is enough.

Rest In Peace, Chet. Thanks for the memories, even if I can’t remember all of them.