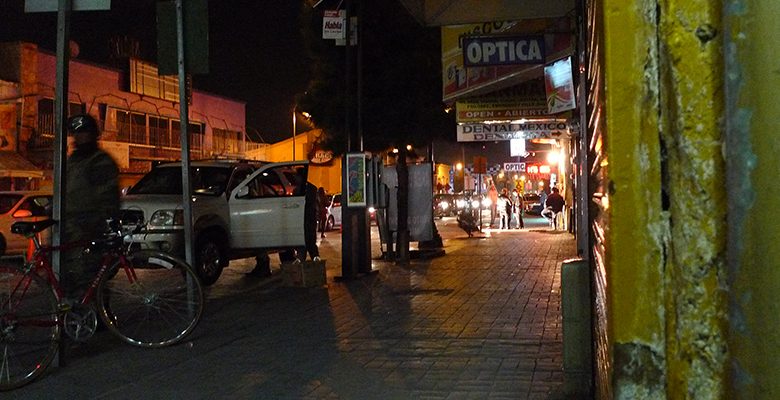 Last week I went to Juarez to see which bars were being closed.

At one point, my two favorite bars in the world were in Juarez. The Arbolito was a humble little bar, scarcely bigger than your living room. It was on Calle Mariscal, tucked in amongst the strip bars and whore houses. The Arbolito had regular customers that had been going there forty years, with recurring jokes, and conversations that could rekindle after a weeks-long lull, like dead campfires starting forest fires.

The Arbolito was cut to the quick by an urban renewal process that replaced tawdry businesses with vacant lots.

My other favorite bar was Club Paraiso. It was a tribute to the taxedermial arts, a garish storefront on Ugarte, that was like a trip back to the seventies.

When I went by yesterday, the door was locked, but there was no Clausarado sticker sealing the joint with official censure.

I crossed Sixteenth with the light, and I took off my hat as I walked through a shopping center breezeway lined with competing cell phone kiosks. Back into the daylight, the pedestrian mall that used to be the street Nicolas Bravo seemed less crowded than the last time I’d bumped through it. Shiny storefronts sold Chinese interpretations of the latest fashions. A unisex salon solicited a stylist. A peripatetic vendor switched buckles on leather belts.

The crowd was likewise thin on La Paz. On other days, bandas and rancheras would have been blasting from the saloons and beer halls. But the police had closed fifty bars downtown in the last few days, on a variety of what I assume must be perfectly legal pretexts, though on an internet news site, one irate bar owner claimed she’d been shut down because the police saw a cockroach.

A couple of types leaned on the steel burglar bar door in front of a joint I’d been to a couple of times. It was in front of the old Methodist church, where three years ago I’d seen a guy selling crack cocaine in the middle of the afternoon. A crowd swarmed around him like he was feeding pigeons. It was near there that four young men were reportedly picked up by the police, and found dead three days later.

Is there a bar still open around here?

Yeah, the older guy said. On the next block, upstairs.

Wasn’t this the place with the girls, I asked him.

It was a dancehall like we used to have in the U.S. in the thirties, from what I’ve read. With taxi dancers that a sport could wheel around the dance floor for five pesos a song.

I walked in the direction of the open bar, asking directions as I went.

I found a guy selling potatoes from a nearly empty storefront. Over there, by the umbrella, he told me. Up the stairs.

The handrail was rickety. It moved as I climbed the worn marble steps. Two municipal policemen walked down as I was walking up. I took a seat at the bar, and ordered an Indio, with a glass. The girl behind the bar brought me a plastic cup with ice.

I laid my hat on the bar and set my camera on the brim.

The bar was high-ceilinged, and dark. The walls were painted black. Light came up the stairwell, and leaked in around curtained windows, and four televisions glowed with a fuzzy interpretation of a Berlin-Dusseldorf Bundesliga qualifier.

Three cops came in the bar. I scanned them in the mirror. The lady cop wore a mask. They left, and I worked on my beer, and watched the game. The fans threw highway flares onto the pitch, and the players tossed them off again, and then the cops were back, and this time the lady cop didn’t have her mask.

They picked a guy from the bar, a sharp dresser with a black cowboy hat, and directed him over to a table for a revision. Then they picked me.

I picked up my camera and my backpack and went over to the vacant table they pointed at. I left my hat on the bar.

Empty your pockets on the table, the girl cop said. Then she frisked me in a pretty good imitation of a TSA pat down. She wiped my legs from my inseam to my ankles and stretched the elastic of my underwear. Air travel has taught me to be comfortable with the uninvited familiarities of strangers.

By the time she finished my pat down the cowboy was back at the bar and the other two cops were flanking me. To what do you dedicate yourself? The older cop asked it. It looked like he was in charge.

They poked through my wallet and backpack with flashlights. They didn’t find anything that interested them.

Okay, the older cop said. He extended his hand, and I shook it.

After they left, I checked to make sure that my money was still in my billfold.

I finished my beer, and had another one, and a shot of Tradicional, and walked down the stairs and back into the afternoon.