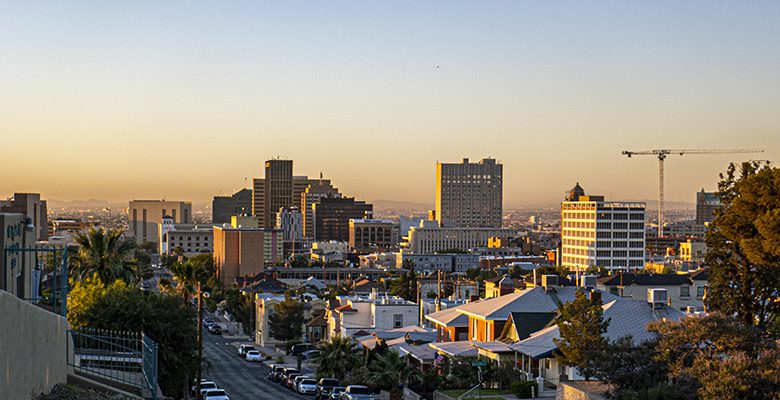 This piece originally appeared on 13 August 2012.

All across American, downtowns are in trouble. They’re dead, or dying. It’s epidemic. When happy motoring drew middle class Americans to the suburbs, downtowns were abandoned. Sometimes the more impoverished moved in. Sometimes no one moved in at all. Revitalizing downtowns has become a high priority. So much so that consultants that specialize in the study and reanimation of downtowns get fat, six figure paychecks from city planning departments looking for results or a scapegoat, or plausible deniability. Some downtowns are in the process of being reanimated, or they’re teetering back from the brink of dead, bright eyed zombies in a renaissance frenzy.

El Paso’s downtown used to thrive. The downtown JC Penny grossed more per square foot than any JC Penny in the United States. While it’s clearly seen better days, El Paso’s downtown never emptied out entirely either. Downtown El Paso is pinned to the humanity of Mexico with an international bridge, and snuggled by residential neighborhoods within easy walking distance. Chihuahuita, Sunset Heights, Segundo Barrio and Alexander Heights were never dissipated by urban decay. The mansions of Montana Avenue were subsumed by lawyers’ offices. In downtown, the retail enterprises were buoyed by a steady stream of Mexicans crossing the bridge, or sometimes just the river.

Then things changed. Border communities are subject to the vagaries of geo-politics and international economics, and the border got harder to cross. The Border Patrol started parking their green trucks every quarter mile on the border. NAFTA cut into the paychecks of the most frequent shoppers. Then some fanatics flew jetliners into skyscrapers back east. And then the economy, which had been buzzing like a test pilot at a meth factory, had a heart attack.

Somewhere towards the end, the planners decided to move the buses from the Plaza to the southern edge of downtown, by the tracks, and all the low income bus commuters didn’t have a reason to go any further into downtown. Soon, all the fast food joints by the Plaza dried up. Even the high-margin, low-overhead signature loan joints are struggling.

There is general agreement among the chattering political class that El Paso needs a great downtown to be a world-class city. But is this really true? Does L.A. have a great downtown? Houston? El Paso is a great city in that it is culturally unique, in the way that New Orleans or Las Vegas is unique. What place best defines the gestalt of El Paso? Chico’s Tacos? Scenic Drive? Any cursory look at the problems El Paso is facing today would see education as being a higher priority than a ballpark. And can we really reanimate downtown by grafting on a baseball stadium like a Frankenstein head?

The problem is that all those shoppers and diners and drinkers we’re trying to attract downtown have to come from somewhere. And where we want them coming from is the suburbs. So a vote for downtown revitalization is a vote against the outlying businesses and strip malls. As the city planners nudge us into downtown development and Smart Growth communities, it’s nudging us away from someplace else. And that someplace may be great for the future, but people — ordinary, working class, small businessmen, chasing the American dream– have invested their lives and gambled their livelihoods on things staying pretty much the way they are, and now the city’s shaking things up like we’re living in their snow globe.

The city government will inevitably develop plans for the city. But they need to let El Pasoans adjust. And adjustment takes time. And social engineering should take place at a nearly glacial pace. If it’s right, and continues to be right, then we’ll get there. If it’s right today and wrong tomorrow, then we don’t want to be stuck with it, despite your good intentions. Which brings us back to the crux of the biscuit: Does El Paso need a vibrant downtown?