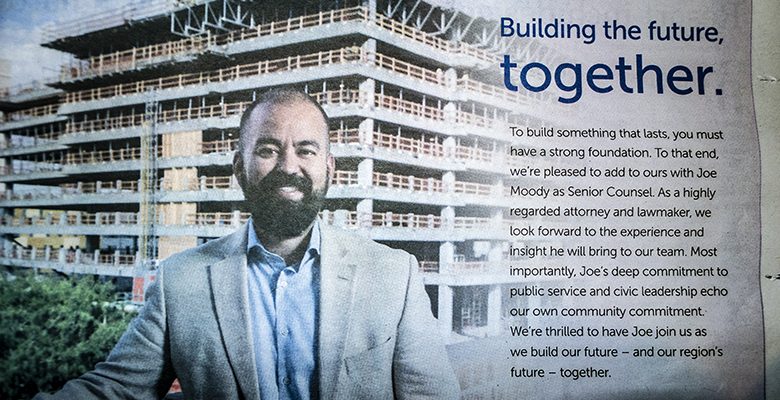 This advert in the El Paso Inc. says that State Representative Joe Moody is the new General Counsel for WestStar Bank.

We all thought Joe Moody was going to run for District Attorney. That was the plan that was in the pipes.

At least, that’s what some of the local wheels thought.

As reported in the El Paso Times:

“State Rep. Joe Moody will seek another term in the Texas House of Representatives, despite speculation that he would run for El Paso County district attorney.

“ ‘I think we have built a lot of momentum for El Paso,’ Moody said. ‘The delegation we sent to Austin this past session is arguably the most effective in several decades, and when you have the ability to continue that for your community, it is hard to walk away from that responsibility — even when there are other opportunities to serve your community.’

“He added, ‘If I am thinking broadly about what’s best for El Paso, then the Capitol is the place for me to make the biggest difference for as many people as possible.’ ”

I can’t fault Rep. Moody for taking a job at WestStar Bank. State Representatives only make about $20,000 a year, plus tips campaign donations. A man’s got to eat.

And I’ve don’t object to Rep. Moody bringing home some of that state pork. Lord knows that highway money only goes so far, and El Paso needs all the outside investment we can get.