Walking across the bridge, I wish I’d brought a scarf, except the holiday house guests were between me and the closet, and I don’t like to intrude.

At 7:30 on the Friday after Thanksgiving there’s no pedestrian exit control at the free bridge. Big trucks are shunted off to a garita for a paper check, some with trailers, some deadheading without. To my right a short set of stairs, guarded by a No Admittance sign, leads up to a dock, but the lights are out, and I can’t imagine wanting admittance anyway.

On the bridge, the tunnel is arched chain link, cross-hatched with expanded steel on one side to discourage entrepreneurs from dropping contraband into the beds of passing pickup trucks. Delta runs down there, but traffic is light.

An island of grass barely rises from the river four inches deep.

The big trucks deliver a gust of diesel-tainted warmth.

Mexican customs is a girl who might be fifteen. She doesn’t look at me till I say aloha and then she smiles. I walk past an administrative bureaucracy, people standing in line in front of people sitting behind glass. Immigration, I guess. Then the sidewalk is lined with vertical brushed stainless steel tubes, four inches think with an inch and a half between them, eight feet high, or the metric equivalent, and I think of a pipe organ, or Pachinko, and then I’m through the chute, and the wind is cutting, and I tug my hat down to keep it on.

I’m supposed to wait at the flags, but there are no flags, only flagpoles, but I can pretend, so I stand on the curb and wish I hadn’t worn the conspicuously nice suede jacket. I wore it for later, not for standing on the curb.

A guy my age is standing on the curb, and I guess he doesn’t like my look, because when I stand next to him, he walks away, back towards the bridge, and then comes back when a car pulls up.

My flip phone says it’s 7:45 when Gabe pulls up in a dark blue Toyota, and after introductions I fold myself into the front seat. Four minutes later we turn off into a side street and park next to a two story office building and climb the stairs. A jazz band is playing in the next room, and she offers me a drink. I ask for an Indio, and she brings it and a bottle of mezcal with three shots in it. I pour the beer and empty the bottle into two different coffee cups. 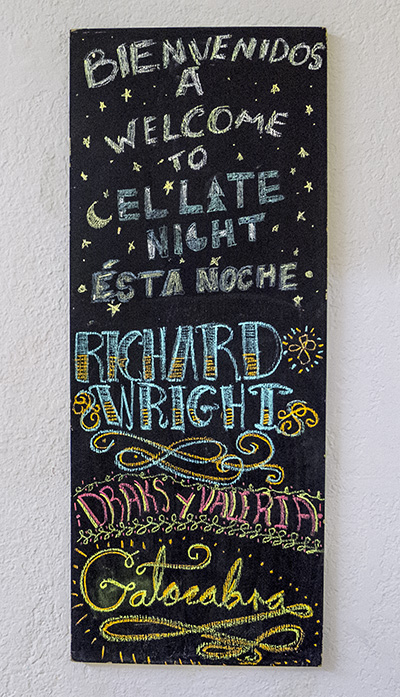 My name’s on a blackboard, in colored chalk.

The host walks into the room where I’m drinking Indio and mezcal, and I recognize him because I saw him on YouTube. Badía. He starts to talk to me in English but I tell him we’re speaking Spanish to loosen the gears. Then Lolo comes in. The sidekick. The guy who sits on the couch.

I drink. We talk.

A couple of other guys walk in with two liters of Coke and bottle of brandy. One of them wears a black felt cowboy hat and Rasputin’s beard. The other one wears a tee shirt under a blazer. The t-shirt says Putas y Pase. Whores and cocaine. I figger he’s a politician.

Everyone goes into the next room to smoke cigarettes, and I go to. They stand by the window and make a nominal effort to blow smoke out the window. The package of Delicados has a picture of dead rat on it. 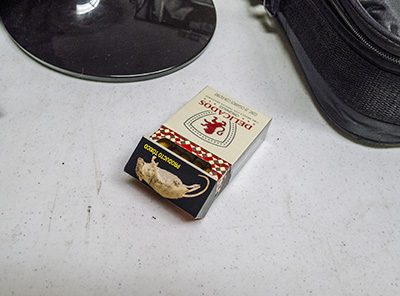 I find the mini-fridge in the next room, and grab another beer, and then everyone leaves to shoot the monologue, or to watch.

I grab a Red Bull from my day bag, and go into what passes for a bar. There’s some stuff to mix with a Red Bull, but no tequila.

I settle on the Glenlivet.

I mix one and drink it fast, and then I mix another one.

I’m whistling backstage but no one calls me on it. I notice, and stop, and then catch myself whistling again. Maybe it’s not bad luck in Mexico.

I drift into the studio.

My living room is probably bigger. They’re shooting the show with three digital SLR’s, two Nikons and a Canon, on tripods, and there’s three rows of six chairs on one end of the room, and a couch and a little desk on the other end. 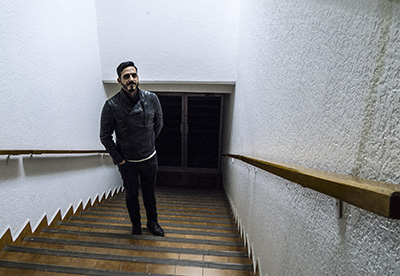 Badía comes in through a door, and everyone cheers, like we weren’t just hanging out a minute ago, and Badía gives his monologue and we all laugh in all the right places.

Then there’s a break where they’ll probably stick a commercial in post, and in the studio we move all the chairs, and a guy comes in and stands in front of the green wall. They move the cameras, and he talks fast, like the building’s on fire or the cops are coming and we’re all going to die, but really he’s just talking about Uber invading Juarez. Then they play a video of this guy interviewing taxistas, on a flat screen they set up for us, the audience.

I don’t catch it all because I’m checking out the exits in case the building’s on fire or the cops are coming, but then he’s back in front of the green screen and he wraps it up.

He killed. We all cheer, me loudest, probably because I didn’t catch it all.

Then I’m up. They pin a microphone to me, and I walk through the door, and me and Badia shake hands, and me and Lolo, and I sit on the couch.

It went well, I guess. Or maybe they were just being nice.