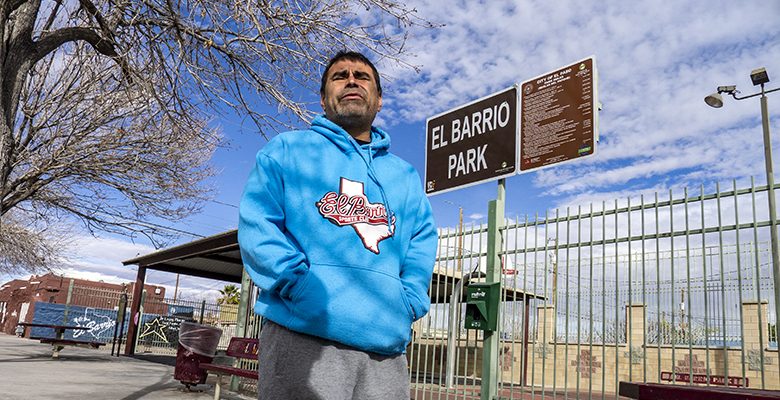 Here’s a letter that Cruz Morales posted on Facebook:

This correspondence is to notify that you and El Barrio Sports Club are in violation of of the El Paso Municipal Code Chapter 13.24.030 City Parks and Recreation Authority to grant permits, licenses, leases, concessions or contracts — Permitee responsibilities, hereafter “City Code.”

You and any member of or representative of El Barrio Sports Club are instructed to immediately cease and desist from planning, holding and participating in permit-less and illegal activities at all City of El Paso Parks and Recreation Centers, including but not limited to (El Barrio Park). Failing to obtain a permit for use of the park for special events, tournament/sporting events, or failure to abide by permit requirements is a violation of City Code. The use of a park for special event or sporting events without a permit or participating in illegal activity is in violation of the City of El Paso’s right to ensure unreasonable interference with the rights of the the general public to the enjoyment of the park. Should you fail to cease illegal activity or use of the park without permits, the City of El Paso may elect to file a civil and/or criminal action against you.

Further, on September 17, 2021 you were issued a Notice of Suspension for six (6) months for violation of the City of El Paso Parks and Recreation Department’s Behavior Management Policy for participating in illegal activity which includes solicitation of another to participate in illegal activity which includes, but is not limited to theft, vandalism or gambling in or about City of El Paso Parks and Recreation Facilities. Some of the illegal activities you have engaged in include having a sports tournament on September 11, and 12, 2021 without a proper permit and alcoholic beverage consumption at a sporting event. Several attempts to contact you were made the City of El Paso Parks and Recreation staff informing you of the need to obtain proper permits for El Barrio Sports Club prior to the sporting event and you failed to apply for and obtain a park permit. On September 21, 2021, you were again informed by Parks and recreation department staff that you need to apply for permits to allow tournament events at city parks, and the El Paso Police Department was notified of the violation, however, you have continued to hold events at El Barrio Park.

Information regarding the opportunity to appeal was provided in the Notice of Suspension, and to date, the Parks and Recreation Department Recreation Program Manager has not received written appeal on you behalf.

We understand the importance of recreational activities for children and families in the El Paso Community. In failing to obtain the proper permits, you as well as El Barrio Sports Club are in violation of El Paso Municipal Code Chapter 13.24.030. These violation interfere with the use and safe enjoyment of the El Barrio Park by City of El Paso residents and community members. All El Paso residents and organizations are expected to follow the proper park ordinances, rules, and policies.

Should you have any further questions please do not hesitate to contact Parks and Recreation Deparment for the City of El Paso, Texas.

(I typed it from a .jpg so I might have made some mistakes, but not a lot of mistakes.)

Mr. Morales is the organizer behind El Barrio Sports Club.

Please note that neither Mr. Morales nor the El Barrio Sports Club are being accused of ” theft, vandalism or gambling in or about City of El Paso Parks and Recreation Facilities.” Mr. Fyffe apparently just included that in the letter to justify his position. The City is mad because the El Barrio Sports Club had a little basketball tournament without a permit, and they may have enjoyed a couple of cold ones after the games.

Are you kidding me?

El Barrio Park is about the size of four bedroom house on the west side. It’s not even big enough for a full-size basketball court. The park is located two blocks south of the canal in the Chamizal neighborhood, at the corner of Raynor and Findley. Cruz Morales lives a couple blocks away. He takes care of the park like it was his own.

And now the Parks and Recreation Department is complaining?

“We’ve been doing things at the park for eighteen years, and we’ve never had any problems till this year. Now the city is asking for permits, all of a sudden,” Mr. Morales told me over the phone.

“We’ve had volleyball tournaments and basketball tournaments. Thanksgiving food giveaways, toy giveaways for Christmas. People have been doing events at the park since the seventies and eighties, and I took over those projects about eighteen years ago. And we’ve never had a problem with the city before.”

According to GovSalaries.com, Mr. Fyffe makes $165,000 a year. I reckon he wouldn’t miss a meal if he dipped into his own pocket to pay for Mr. Morales’ permits.

Mr. Morales has done more for his neighborhood than the entire Parks and Recreation Department has ever done. Ever.

Remember when government was a service and not a business?

Mr. Morales also told me that when the Parks and Rec people showed up at Barrio Park, they brought a police escort.

“Why? Do they think that we’re animals?” Mr. Morales asked.

Remember, part of the City’s Strategic Plan (6.6) is to “Identify Potential New Revenue Streams”. That’s what you are to the City. A potential new revenue stream.

I’m sure that what Mr. Morales wants from the City is just what most of the rest of El Pasoans want: To be left alone, and not have our taxes raised every year.

That, and maybe they could fix the streets.