Jenni Burton had a weekly column in NewspaperTree from 2004 to 2007. Maybe longer. This month she moved out of the Abdou Building for the last time. This is Part 1 of a two parts.

I remember the first night after I received the keys to the 5th floor of the Abdou Building. I was 17. My boyfriend and I had spent over a month eating nothing but cereal, ramen, and tomato soup so I could save every penny I made to pay the deposit, first and last month’s rent. I hadn’t told my tweaker landlord in Sunset Heights that we were moving out yet. A week later I would stare into his picked-apart face, his teeth grinding as he stared at my U-Haul, and say, “No I will not be renewing my lease.”

I think it was my day off, because I arrived around eight at night, after the meters stopped running. Had it been a work day, I would have been on the phones at GC Services until 12am. We were moving out of the apartment in Sunset that week and I needed to get the space clean.

I remember walking through the door and turning on the kitchen’s harsh florescent overhead lights. Everything was covered in a thick layer of dust. There was some new plumbing and electric, a sink, and appliances from the 1980’s. There was new composite tile in the bathroom, a new tub, and sink. The bedroom had been painted in thick latex greasepaint white, and cream colored carpet had been installed. There was no air conditioning at all, so the windows and transoms (the ones still working) were open for ventilation. It was late May, and the brutal, baked-in mid-day heat radiated down the concrete walls as the building breathed its night-time gasp. Excepting the respite of the storm borne winds which rattled the leaded glass windows, it was stuffy, and smelled of damp moth balls and bird shit.

I remember walking down the hallway from the kitchen to the large room on the north end with a bucket containing a bottle of bleach, a bottle of Pine-Sol, orange oil for the wood trim, GooGone, neoprene gloves, and a face mask. I had also brought a tea kettle- a trick I learned while serving at Village Inn- to “hot pot” the floors.

As I turned the light on in the great room which would serve for nearly 16 years as my living room and two years as my dance studio, the sickly split pea color of the remaining patches of ancient shag carpet clashed against the pale jade of the walls. I wanted it gone- all gone- baptized in bleach and mineral spirits and muriatic acid; stripped down to the bare concrete, and reborn with a primer coat of Kilz. I looked at the red mahogany trim, much of which had escaped being painted (or it was sealed in shellac so the paint peeled in great rippling sine waves of latex and acrylic once a heat gun was applied), and I wanted nothing more than to slather it in orange oil, and return its luster.

That night as I ripped out the guano-stained shag and scalded the floors, I looked over the downtown skyline. The lights of the Wells Fargo building were still on, and the Blue Flame of the Southern Union Gas building was shining orange because it was going to rain. I remember the sense of possibility. I remember the quiet of the night. I remember my resignation, my hopefulness- if I couldn’t move, I would make something here. 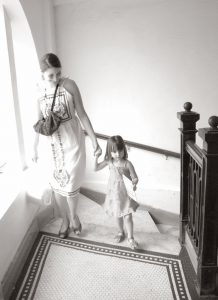 Over the next few days, I discovered bobby pins left by the beauty salon –Ernestina’s- which had last occupied the building over eight years before. I found slips of paper, long-faded notes from the Bridal/Novia shop- New York Originals-which had once graced the great room, and a long scar left on the tile of the hallway from when they dragged their industrial sewing machines out to the elevator.

There was one layer of paint that would never give. The first layer. Casein tempera. That shit will be with the building forever.

I was there when I printed my first shirt.

I was there when I went into labor with my first child.

I was there when I wrote my first published article.

I was there when I met my husband.

I was there when I went into labor with my second child.

Ask Justin about the time Jimmy Baca called him a “cracker”.

As we grew, so did our space. Two Grammy’s graced the walls of my husband’s upstairs studio. Live. Work. “Lifestyle living”. Developers really love to use this phrase. For us, lifestyle living was the ability to raise a family and work at home. “Lifestyle living” was a building full of our best friends who were our neighbors. Weekend pot-lucks. Rooftop barbecues. Open doors.

Open doors are now closed doors as we begin to pack our bags and boxes, our kitchens, dining rooms, art studios, workspaces, in preparation for the inevitable. Everything must go. Check Facebook for any of your favorite knick-knacks. 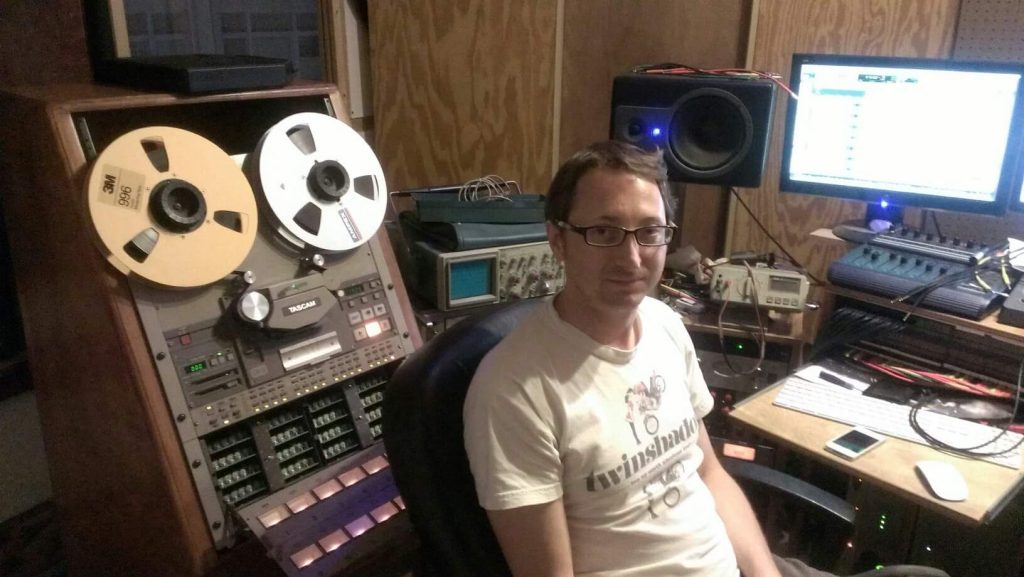 Yesterday my husband pulled the first screw out of the floating floor in his sound-proof drum tracking room- a room that he spent two years building by hand. This room served as a sort of Doctoral Thesis with regards to his skills as a recording engineer. With that screw, reality set in. After 18 years in the Abdou Building, we were moving out for good.

Next will be my dance studio, built in our former living room after we bought a house to live with and accommodate my father, a widower and retiree.

After 18 years in the Abdou, we had finally begun to realize the fullness of our work within our space- aided by the twin virtues of maturity and credit. We had transformed it into a functioning laboratory of the performing and fine arts. We had big plans for events, some of which we were able to realize. I was only a semester away from finishing my BFA in Dance. I left town in June for a month-long contemporary dance intensive in Florence, Italy. While abroad, I had an inkling of what was to come. I thought, maybe we’ll have another year and a half. We’ll make it work. We’ll have time to figure things out. When I returned in late July, I realized that we had far less time than I had thought.

It’s been about eight years since my last installment of “Downtown Diary”, since Newspaper Tree went to the big server in the sky.

Back then, people would say, “Are you crazy? You don’t own the building? And you put so much work into it? Are you crazy? What about co-oping the building? Can you do that? What if he sells?” Well, most businesses rent or lease space. Most businesses invest money in that leased space to suit their needs. The difference is that, aside from a couple of small loans taken out almost a decade ago and paid-off we didn’t to that with someone else’s money. We’ll still own our wood floors, our sound treatments, the equipment. We’ll still own our largest financial investments. What we are losing however is time.

The developers, the historians, the politicians: they would never sully the glasslike sheen of their nail beds, destroy the gentle suppleness of their lung’s alveoli, or brace their lumbar spines to preserve a space themselves.

My husband’s rough and calloused hands, full of long forgotten splinters, ridged nail-beds; his sinewy muscular frame toned by the hammer and the awl and the plane; his asthmatic cough enflamed by dry wall and sheet rock and sawdust- this is the spirit of El Paso. Hard work. Ingenuity. Rasquachismo.

Jenni Burton is a mother, dancer, teacher, writer, and printmaker. She will miss many things about living and working downtown. She will not miss the endless construction. Have fun with all that, kids.