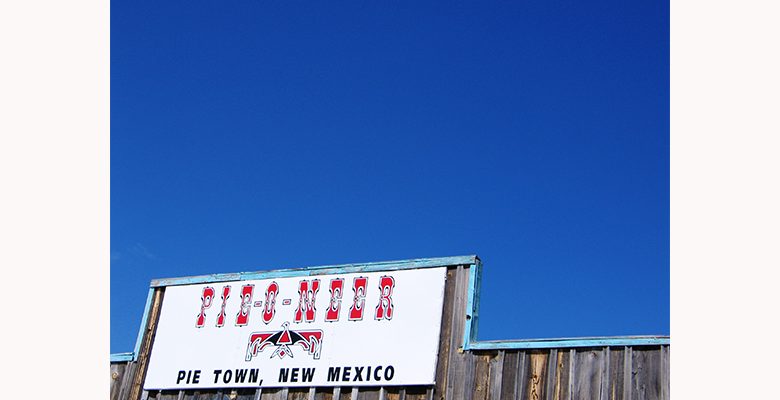 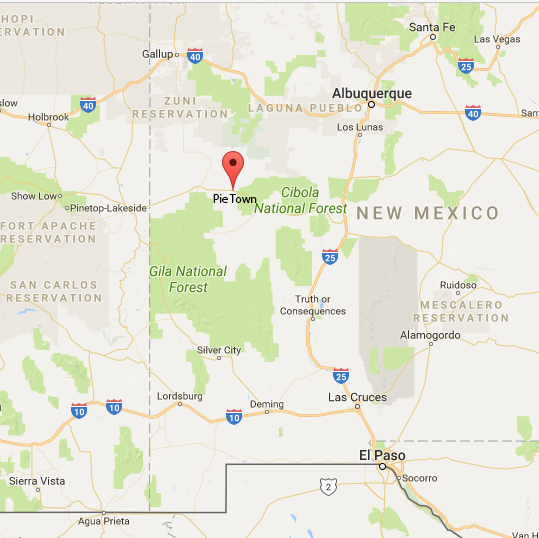 ever since a man named Clyde Norman first began baking dried apple pies at a lonely, dusty crossroads atop the Continental Divide back in the 1920’s. Those pies became so famous that, in 1927, the little burg that sprang up around the crossroads became officially known as Pie Town, New Mexico. This despite the wishes of government authorities who thought the name a bit too unconventional.

Initially, US Highway 60, the “Coast-to-Coast Highway,” was poised to become the major east-west route through the southwestern United States. Expectations for the future of Pie Town, which sits at a lofty 7,772’ above sea level, ran high. But Route 66 was put through Albuquerque, about 160 miles to the northeast, marooning Pie Town and leaving the vast region which surrounds it relatively un-traveled. Nevertheless, Pie Town, which remains unincorporated, persisted. 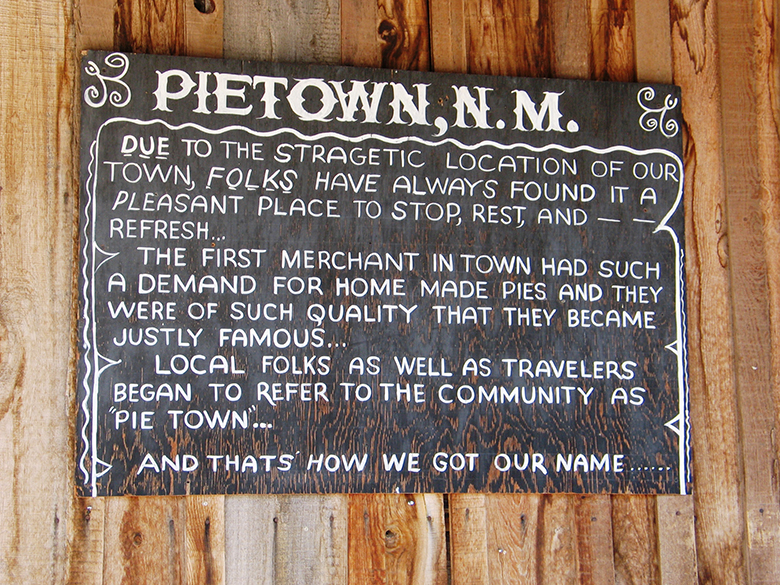 Pie Town really became a town during the Dust Bowl of the 1930’s, when farmers left barren land to the east and attempted to re-start their lives in the rolling hills around Pie Town. At its peak there were perhaps 250 families living in Pie Town and working together, acting as more of a co-operative than a town, everyone banding together to make a living off a land that threatened to be difficult in the best of times. And, as is true in many places and lives, it was often not the best of times. One resident, Faro Caudill, who became sick while living in Pie Town and later decided to add adultery to his list of problems, scrawled a farewell on the gate of his house as he left in 1942: “Farewell, old homestead. I bid you adieu. I may go to hell but I’ll never come back to you.” 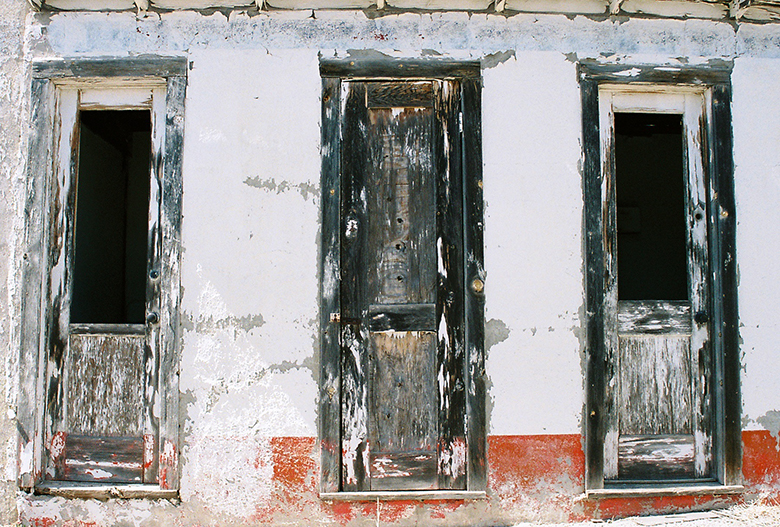 But his ex-wife, Doris, whose memories of her time in Pie Town must have been mixed at best, years later recalled the place, and particularly bath time, with some fondness: “We would take a bath on Saturday night. We had a number three bathtub. I’d get the water all hot and then I’d bathe Josie and then I’d take a bath and then Faro would take a bath. . . . You kind of wore the water out.” A rustic lifestyle, to be sure.

Pie Town, including Faro and Doris Caudill and their daughter, Josie, was well-documented by Russell Lee, who shot 620 photographs in the area for the Farm Security Administration in 1940. These photos, both color and black and white, depict a rural community still reeling from the effects of the Great Depression. Yet there appears to be contentment and community despite the poverty. But things got even tougher in the 1950’s when the climate of the area began to shift, becoming even drier, and the farming went from pretty good, even if sometimes challenging, to impossible. Many of Pie Town’s residents were forced to pack up and head elsewhere. But the pies remained. Below is a photo taken by Russell Lee in October 1940 and entitled “Faro and Doris Caudill, homesteaders, Pie Town, New Mexico.” 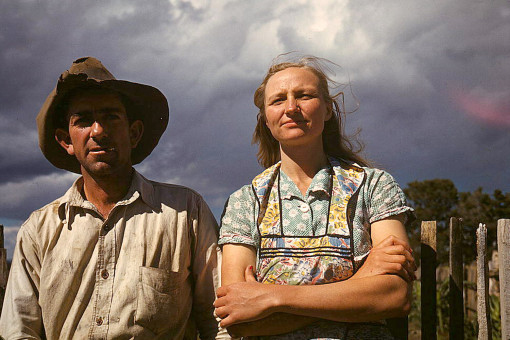 Pie Town as seen from Highway 60 is perhaps a mile or two long. On the northern side of the highway is the Pie-O-Neer. Just slightly to the west, on the southern side of the road, is the Daily Pie Café. On our stop in Pie Town, we went to the place we came to first: the Pie-O-Neer. The blueberry pie was excellent, as one would expect, and, naturally, there was a countless variety of pies to choose from. But they sell out quick and I was a little disappointed the pecan-oat was gone by the time we arrived. What was somewhat unexpected was how good the rest of the food was. The green chile soup was delicious and even a simple sandwich was well above ordinary. Heck, the tea was pretty nice, too. Also unexpected was finding out that the guy at the table next to ours had attended high school in the same building I’d taken swimming lessons at as a kid, just a few minutes from my childhood home back in Minnesota. The owners of the Pie-O-Neer told us these sorts of encounters happened there all the time. A result, they suspected, of getting people off the interstate and moving at a speed more conducive to engaging with your fellow travelers. Such a shift in priorities is one of their stated goals. 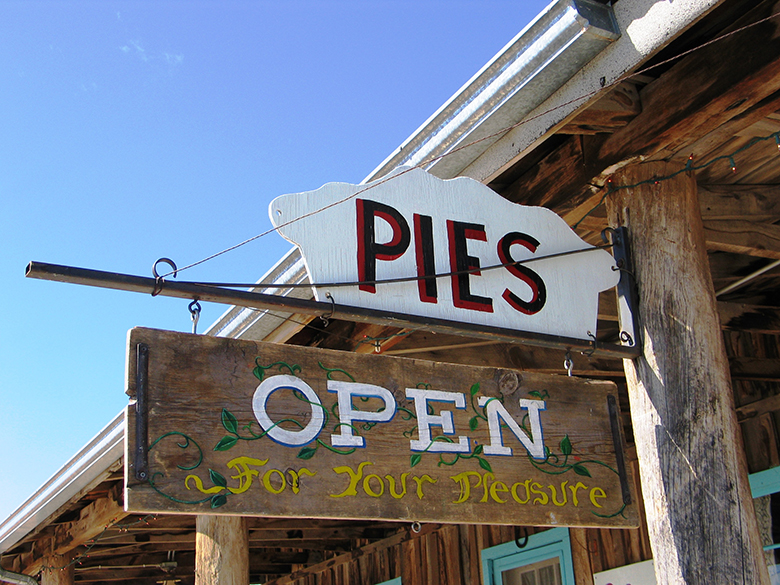 So, why would a person stay in Pie Town, choosing to live in what would appear to be relative isolation? In 2005, Mike Rawl, husband of the Daily Pie Café’s pie chef, told Smithsonian Magazine: “I’ve thought about it a lot. I think the very same impulses that brought the homesteaders out here brought us out. My family, they had the Dust Bowl. Here you’ve got to come out and buy a tax license and deal with insurance and government regulations. But it’s the same thing. It’s about freedom, the freedom to leave one place and try to make it in another. For them their farms got buried in sand. They had to leave. Back in Maryland it never really seemed like it was for us. And I don’t mean for us, exactly. You’re helping people out. This place becomes part of the town. I’ve had people running out of gas in the middle of the night. I’ve got a tank out back here. You’re a part of something. That’s what I mean to say. It’s very hard. You have to fight it. But the life here is worth the fight.” 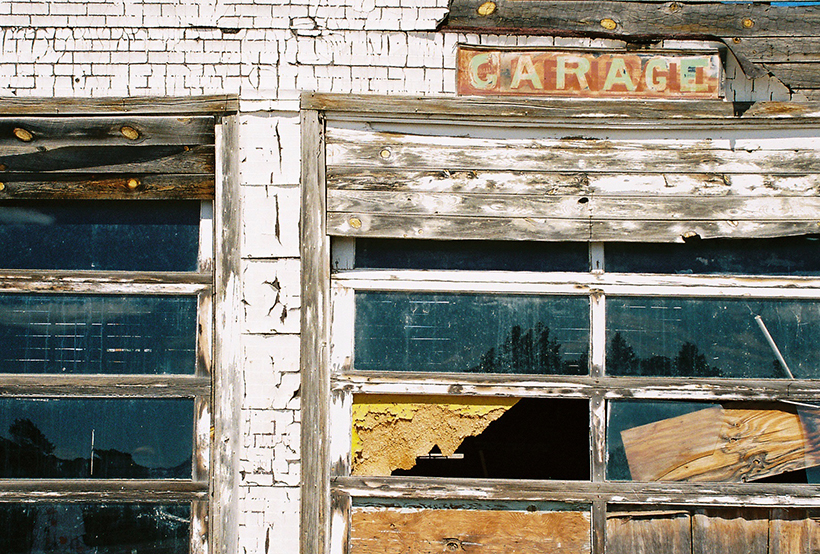 So, that’s it, really. Freedom and community. And pie. Lots of delicious pie. I’ll be going back soon.

Pie Town’s annual Pie Festival occurs the second Saturday of September. Also of interest is the nearby DanCyn’ Windmill Museum, the only windmill museum I believe I’ve ever seen. 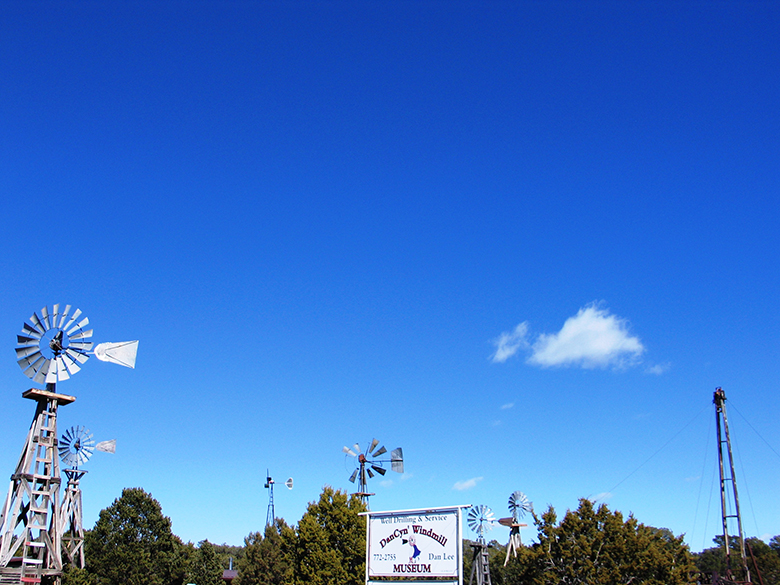 All pictures taken in Pie Town, NM. The most interesting source of information was the article on Pie Town that appeared in Smithsonian Magazine in February 2005. It can be found on-line here. Also of interest is a Pie Town Page associated with the Daily Pie Café, which includes links to the cafe’s blog and the Smithsonian Magazine article. It’s well worth having a look at Russell Lee’s photos of Pie Town, which can be found by searching the Library of Congress collection. If you do a little searching you might come across the marriage certificate of Faro and Doris Caudill, photographed on the wall of their home prior to Mr. Caudill’s indiscretions. Finally, there is an entire book about the Caudills, particularly Doris, titled, “Pie Town Woman,” by Joan Myers, a New Mexico author.